We only had 3 days of class this week, but I've been going full blast! In addition to getting up before 5 am, being in an 85 degree (and up) classroom for 8 and a half hours, getting home to take care of my own kids, and running a 5k each day, I've been pouring on the high energy during my classes.

It was so important to me to make this first week a good one, not only for me, but for my students.  Knowing that the room was going to be a bit toasty, and that math would be happening in it, I knew many of the kids would be coming to me with some ... demeanor concerns.  I don't blame them.

I will get them up and moving around when it cools off a bit, but for now, I wanted to create an air of fun and interest in my room, demonstrating the beauty that is mathematics.

I THINK I've done that.  It's hard to tell, simply because the nature of high school students is so different than that of middle school students.  It will take me a bit of time to relearn how to read my audience, but so far I think I'm heading in the right direction.

What you do during the first few days will set a tone. What kind of tone do you want to set? Do you want the students to be in charge? Do you want them to be afraid of you? To love you? Do you set a tone of cooperation, or one of domination?

I'm making a conscious effort to use names of everyone I address and to keep a smile on my face as much as possible.

I managed to write back to every student this week on all of their name tents.  It has been time consuming, but very worth it.

We are babysitting for a friend tonight, so I need to run before that happens and then I plan to sleep until school starts up again on Tuesday. 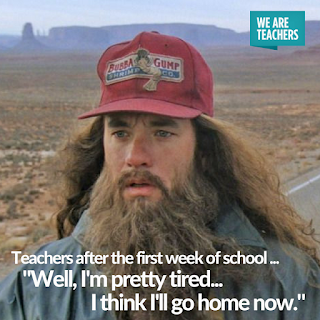 We began looking at procedures with our daily warm-ups and recitation of the 8 Standards of Mathematical Practices. I gave a brief explanation of the Standards-Based Grading system that I use and answered any questions that they happen to think of right then.

I explained to both classes (Algebra II and Geometry) that mathematics is a language.  It's insanely hard to learn a language by simply reading the dictionary.  Those who wish to become fluent regularly engage in conversation with native speakers, learning the conjugations and idioms.

Math is no different.  In order to learn math, we have to engage with it beyond simply using the operations.

In Algebra II, we started a card sort activity that was..ahem...appropriated from Jonathan Claydon.

Student groups were given 24 cards, consisting of 8 terms, 8 equations and 8 graphs.  With no help from me, they were asked to put them into 8 piles of 3 cards each, matching term to equation to graph.

I reminded them that it has been a few months and so they shouldn't panic if they don't know it right away. 90% of the groups ROCKED it! They dove in, using different strategies, pulling out the ones they knew (linear, absolute value), picking ones that seemed to go together (f(x)=log(x) and "logarithm") and using process of elimination to find others. 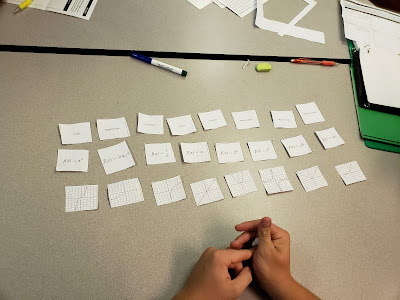 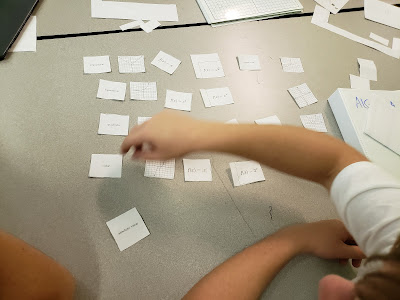 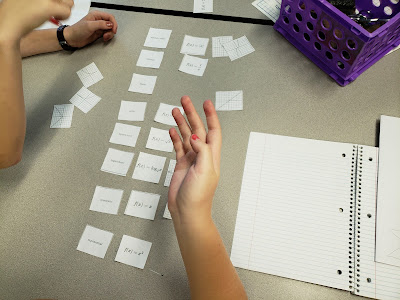 After about 10 minutes, we stopped to talk about how they could figure out which graphs went to which equations if they didn't remember what they looked like.  None of the groups had built a table of values, but when I asked this question directly, they almost all said that you could plug in numbers and graph it.  We did some examples on the board before the bell rang.


In Geometry, we worked on defining terms and notation that we will be using throughout the year. I gave them a check list to try, knowing that most of the notation was beyond what they had covered yet.  Several students asked "what's notation?"

When it became clear that I wasn't going to give them the answers, that I wanted them to struggle, most stopped asking me anything more than clarifying questions. They worked in groups for a bit and when I began to sense the frustration level getting too high, I stopped them.  We looked at the board and built the beginning of our vocabulary notes as a group.

Even in the heat, the kids were engaged and working hard!

I had them fill out the second day of their Name Tents (Ask me a question) and I managed to respond to all of them before I left school!

They were great questions, but a few stuck out to me. 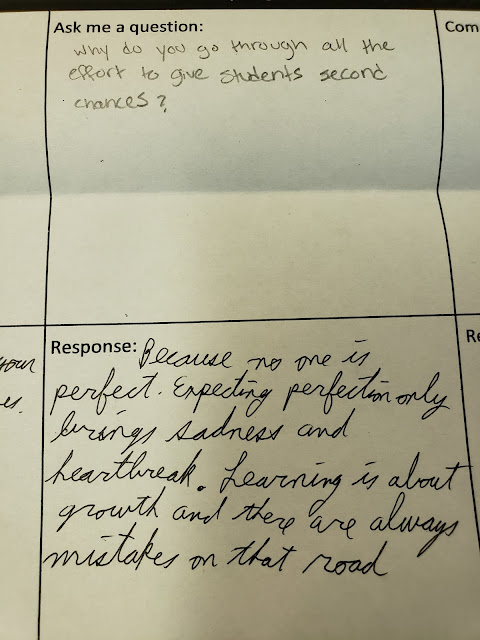 It's a shame that no one will be able to read my response.

I think this is going to be a pretty darn good year!
Email ThisBlogThis!Share to TwitterShare to FacebookShare to Pinterest
1 comment:

I honestly can't reconcile that fact in my mind. I still feel as though I'm in my first few years as a teacher and, in a way, I am. This is only my third year in my current district and those have been full of transition and change.

I took a break from blogging last year and I think there were unintended consequences in terms of my own perspective on my teaching, so I'm going to start up again.

I began this year, not by introducing the syllabus and classroom rules and grading policies, but by having my students write.

My typical Day 1 activity has been asking students to define a "sandwich."  I always get groans and laughs and GREAT discussions and today was no exception.

In an effort to make it more rigorous and mature, since I'm teaching older kids this year, I took a page from the playbook of my kindred teaching spirit, Brian Cerullo (Give him a follow!)

I asked them to write silently for 5 minutes followed by a discussion. In a few cases, I kept having to propose "whatabouts" to challenge their definitions, but by and large, the other students did that.  I was able to sit and watch them interact, keeping track of points I wanted to hit and asking certain students to answer the concerns made by others.

Many of the students left the room with their heads hurting and frustrated in a good way. All day, I only had one student yell out "just tell us what a sandwich is!"

"What do YOU think it is?" the teacher asked socratically.

"How do you know?" I respond socratically.

The other first day change this year was that I used the Name Tents from the brilliant and incomparable Sara Van Der Werf.

I asked students to write a sentence or two at the end of class, reflecting on the class, making comments and giving me their thoughts, and I promised to respond to each one!  Out of 75+ kids, only 3 left them blank.  The comments that I got from them were so interesting and I was glad to hear and be able to respond to each one. 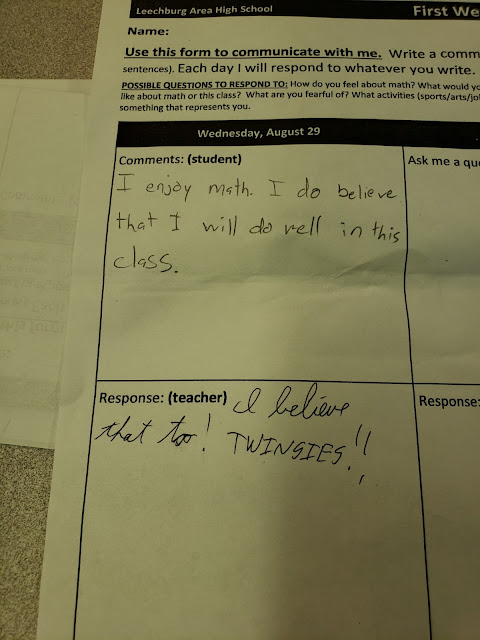 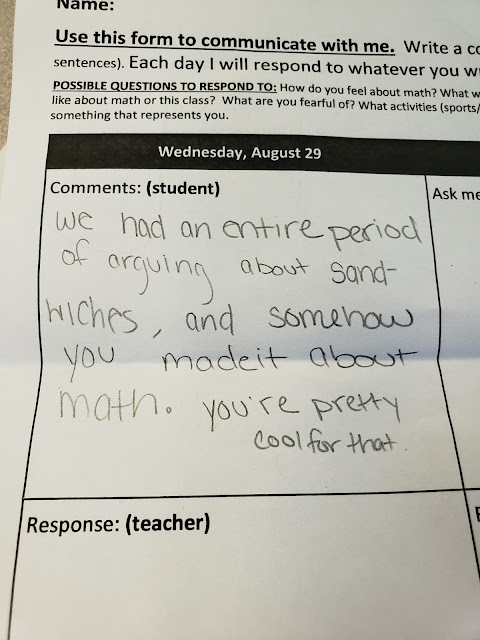 No one told me that I smelled bad, even though it hit 90 in my room today!

I'm looking forward to an interesting (in a good way) year.

I'm going to go crawl inside the refrigerator now.