Posted by Justin at 4:50 PM
Today was the last day of school before break. The students signed up for activities throughout the school. Some watched movies, some made gingerbread houses, some had a Madden tournament and some played soccer.

I offered up my room for board and cards games. I also offered to run a D&D session for some students. I capped it at 6 because any more than that gets WAY too unruly and the time between turns is too long.

Four out of the six had never played D&D before, so we had a quick primer on the rules and mechanics. I impressed upon them that they were adventuring together and we would all be telling a story as a group.

Right from the start, it was obvious that a few of the kids were going to have difficulty working with a group. Even before the first encounter, they had their characters tripping each other and pulling pranks.

The first encounter began with a sheep coming up to them with a scroll of Speaks with Animals, claiming to be a wizard that was transformed by a rival. A half-orc shows up with some wolves to take the sheep back. 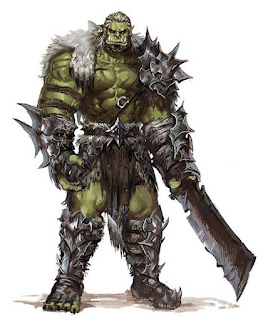 One of the students straight up tackles the half-orc while another student was trying to negotiate.

The do fairly well in the fight, except that two kids seem to have difficulty understanding the concept of "turns" and have to be constantly reminded about how that works.

It quickly became apparent that half of the party was super into the game, was trying to play strategically and seriously, but ended up spending most of their time trying to either undo the damage cause by, or rein in the actions of, the other half.

The story I had planned was designed to be a 2-3 hour adventure for a 4-person party of second level adventurers. We had a 6-person of third level, so it should have gone smoothly.

One of the things that I love about D&D is how consequences of actions, either joking or serious, happen right away. Allow me to give some examples.

The party went into a small tavern to gain some information. The fighter stabbed his sword into the table, thinking it would be funny, and the whole party got kicked out.

While introducing themselves to a paranoid wizard who constructed his house by magically growing trees and vines into the shape he wanted, the paladin draws his weapons and glares at the wizard, immediately getting them thrown out and told to never return.

After returning to the town to decide what to do next, the same paladin gets bored and decides to "raid the local farms." His deity sees that the paladin has broken his sacred oath to protect the poor and downtrodden, and cuts said paladin off from all magical sources.

After coming up with a plan, the party returns to the wizards house to find it fortified and with a guard out front waiting for them.

"We apologize for our rudeness before, but we seek the aid of Master Noke in a matter of great import" is what the rogue was trying to say when the ranger fired an arrow over his shoulder, hitting the guard.

The ranger is then punched into unconsciousness by the guard who then retreats back into the house.

The rest of the party refuses to heal the ranger, who has now started two fights that could probably have been avoided. In the ensuing fight, everyone is brought to the brink of death. The fighter is knocked out and the rest of the party says "NOPE!"

They leave him to bleed out of the floor of the house, hightail it into the forest, head off to Neverwinter and forget about the whole thing.

At the end of the session, I spoke privately to the kids who seemed to be taking it seriously and let them know that most games don't go this way. We talked a bit about how to find a group of players that fit your gaming style and what to do when your party doesn't.

The paladin and ranger told me how much fun they had and asked if we could play again. I told the they would have to ask the rest of the party, who clearly told them no.

We had a brief discussion about "reading a room" and recognizing them their actions don't only have an effect on them, but on those around them. The party was a bit overpowered for this adventure and it was supposed to be a softball, but the way they played made it an impossible task. 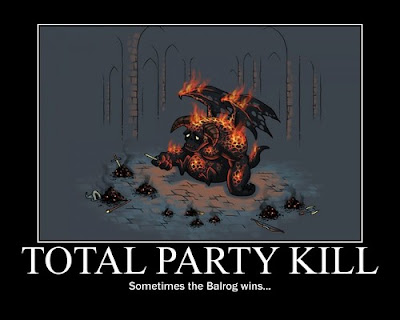 Because of who I am and what I do, this struck me as the PERFECT microcosm.

I went into this session with a vague idea of how it was going to go and had planned accordingly. Several students derailed the plans, but I was able to roll with it and tried to get stuff back on track. Their actions made everything more difficult, not only for them, but for the other students as well.

What I found so interesting about it was how much enjoyment those students derived from the chaos they created.

As a Dungeon Master, my only goal is to make sure that my players have a good time. I don't think I accomplished that goal today for the simple reason that the players each had their own goals, many of which were contradictory to each other. The enjoyment of one student was counter to the enjoyment of others.

This is not to say that some of these students were right and others were wrong. The beauty of D&D is that you can play it however you want and still have a great time. The problem is that these disparate play styles probably shouldn't be in the same group.

But in a classroom, we don't get to choose our party members. The goals are often set either by the teacher, the school board, the state or the nature of the class itself. Yes, we can change the flavor of the discussion, but the mission or quest is still the same.

How do we have this discussion in a way that gets all needs met? How do we get students to understand that their style of play makes it hard for others to enjoy the same tasks? How do we help students get to the end of the quest and feel as though they have accomplished something great, rather than just survived it?

I do know that I will continue to offer to DM for students who wish to play and doing my best to ensure they have fun. 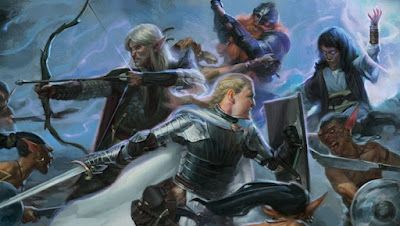