Posted by Justin at 4:07 PM
The 4th marking period is one of almost constant disruption.  A large portion of my schedule and that of my students is used to take standardized tests.  The 8th graders take the PSSA and I proctor the Keystones.  Students are shuffled around the school and normal classes become infrequent.  In addition, there are tons of end-of-the-year assemblies, trips, meetings and performances.

This means that my classes have only had 2 assessments.  We've been covering material, but the opportunity to formally assess those skills hasn't really been in the cards.

In looking over the assessments from today, I'm coming to some conclusions and asking myself some questions.

I think we need to be doing more guided practice.

I know that many of my students struggle with synthesis.  When given A and B, they often have difficulty coming up with C unless explicitly shown how.  Even then, it's often difficult.  When problems don't look exactly like examples, there is deep struggle.

I've also come to the conclusion that I need to be helping them to build the habit of using the resources they have available, specifically sample problems and notes.  Next year, I'm going to be much more deliberate about note-taking.  Instead of asking the students to bring their workbooks each day, I'm going to have them bring a 3-ring binder where we can put the pages from the workbook, collected into chapters.  This will make it much easier to keep sections together and to insert notes and examples between sections of the workbook.

I think with many of my kids, vocal repetition may be helpful.


We have spent 2 weeks working on properties of exponents, but I'm seeing lots of mistakes, and not ones that are similar or consistent.  In many cases, they are applying "rules" that we didn't ever talk about or use in class.

At the same time, I pulled half of the test questions from the review sheet and they were treated as unfamiliar.

There are other issues as well, such as the ability to determine whether an answer makes any sense.

I know where this answer comes from.  They converting 150% into a decimal, but put that decimal in the wrong place, making it .15 instead of 1.50.  My issue is more that no thought was put into thinking "this makes no sense."

Does this come from lack of understanding, or rushing and not checking? 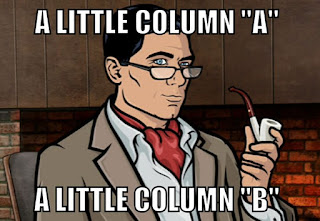