Yes, it is opening week.

It's not REALLY year 5.  This week I began my 11th year as a classroom teacher.  I taught for 2 years in northern New Jersey, 7 years at an urban/suburban school outside of Pittsburgh and now I'm starting my second year at my most recent school.

I spent the last 4 years writing a reflective post every day that I had contact with my students (and a few other posts as well) with one specific goal in mind: I want to be a better teacher.

I made the decision early on to make the blog public and link it to my name.  This was primarily because I knew how fragile the public face of a teacher can be.  One angry parent putting words in the right place can ruin the career of someone who had been changing lives for many years.

As a teacher with a public blog, public Twitter handle, I knew I was taking a risk.  I also knew that having the Sword of Damocles hanging over my head would force a level of mindfulness into the blog that I wanted.

It forced me to focus on me.  When a lesson went wrong, it wasn't because the kids were crappy.  Kids are kids.  If a lesson was bad, it was because I could have done something better and I was determined to do so.

Over the last 4 years, the only times that I have written about specific students were when they were amazing and I wanted to shout praise from the internet rooftops, or when a negative interaction with a student helped me to turn my eyes inward in order to improve and ensure that it didn't happen again.

That has always been my goal.

Over the years, there have been several times when I have felt as though I was sugar-coating my experiences and reflections out of fear of administrative or parental reprisal.  At the same time, I have not had any administrators ever ask me to take the blog down.  I attribute this both to having excellently understanding administrators in this regard and my own constant awareness of my intentions in writing.


As I look back over the last 4 years of this blog, and as I begin to embark upon another year of reflective writing, I can't help but notice the changes that I have undergone as both an educator and a writer.  I think it's safe to say that my colleagues who have known me for a while will agree that I'm a different teacher than I was when I began this adventure.

I also like to think that I'm a better writer, although I still frequently fall victim to hapless ramblings and I will probably never stop putting two spaces after a period.  (Sorry, English teachers.)


I am not sure that I need the same things from this blog as I did when I began writing.  I still see the value of reflective practice and especially in such a public forum as this one.  With three days with students already having lapsed, however, I'm not sure I feel the need for it to be daily.  I haven't quite decided where I come down on this, except that I already missed a few days.

With all of that said, I still find solace and comfort in putting my thoughts down, sending them out into the void to be read or ignored by anyone.  I will continue to do that until such time as I am unable to reflect upon my own practice.  I would hope to continue to receive feedback from those who choose to spend their time reading my words.  I welcome feedback and questions and I acknowledge that I am not perfect.

I am not a master teacher.  I am merely a man who teaches and wants to be better.  I will make mistakes and errors.  I believe in a growth mindset and am willing to learn from my errors.  I am deeply thankful to my readers for accompanying me on this journey for as long as you are able.

So, about that first week...

The students joined us for Wednesday, Thursday and Friday this week and I wanted to make those as positive as I could.  I know how much time is spent on the first day going over classroom rules and expectations.  I wanted no part of that.

Last year, I began my classes by asking a seemingly simple question: What is a sandwich?

I LOVE this question, as anyone who follows me on Twitter probably knows.  It is a question that everyone can answer, but with a strange twist: everyone knows what a sandwich is, until they are asked to define it.

And so on.  The students get deeply frustrated, but in a way that doesn't allow them to give up.  They argue about it for days and for the rest of the year, I'll be asked "yeah, but is it a sandwich?"

This activity is designed as a low-entry, high-ceiling thinking exercise.  It requires students to examine their own thinking and preconceptions, articulating them in a way that allows them to be understood by others.

Since 2014, I have had my students recite the Pledge to Improved Mathematics, a student-friendly version of the 8 Standards of Mathematical Practice as laid out by the National Council of Teachers of Mathematics.

This activity fits solidly into several of these goals and the kids seem to love it.

Last year, I taught 7th and 8th grade students.  This year, I teach the same.  This means that my current 8th grade already did this activity and the impact wouldn't be as a great.  I needed something else.

I began by asking them about mythology.  We talked for a bit about the various myths that they know and how ancient cultures impact modern ones.  Then, I asked: "Do any of you know what a centaur is?" 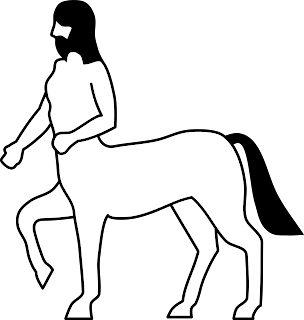 I passed around quarter sheets of paper with the above image.

"Draw pants on the centaur."

The ensuing argument/discussion raged for the remainder of the period and ran the gamut from "where are his no-no bits" to "the front ones are horse arms and should be covered by his shirt, not his pants." 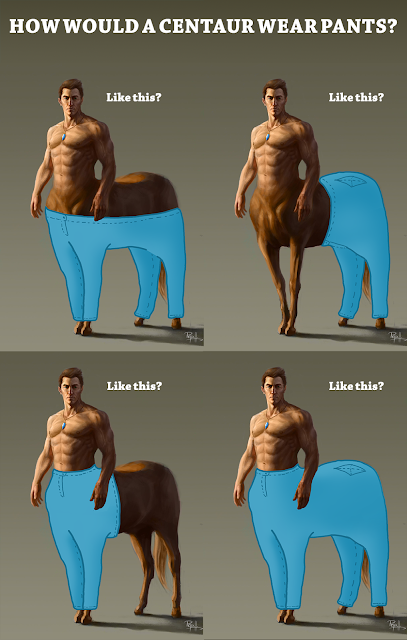 It was a tremendous activity and allowed us to talk about user experience, as well as purpose and goals.

How can you even begin to solve a problem if you don't understand the need for a solution?


On day 2, all of my classes did the same activity: Sara Van Der Werf's "100 Numbers to Get Students Talking."

You can read the basic activity on her page because she explains it MUCH better than I could, but I wanted to detail the order in which my kids worked through it.

Iteration 1: They completed the activity alone, circling the numbers from 1-100, or as many as possible in 2 minutes.

Iteration 2: They completed the activity in groups of 3 or 4, with each student only allowed to circle a number after a teammate had circled the previous number.

Iteration 3: Same as iteration 2, except each kid used a different color pen.  This allowed them to see the patterns and develop a strategy.

Iteration 4: The students could use whatever strategy they chose, but there were two changes.  First, they couldn't go in the same order than the previous iterations.  Whoever was circling number 1 before was now circling number 2.  The second change was that no one was allowed to talk.


In between each iteration, I walked around taking pictures and put them on the board when the timer went off.  (I would post them here, but there are lots of faces and I don't have photo consent.)

I asked them what they saw.

The pictures all showed the same thing: engaged students working together on a task.  Their heads were together and many were confused by the pictures because they were so into the activity, they didn't know I was walking around.  Ultimately, it was a pointless task since we recycled the papers after each round, but they didn't care.  They competed with themselves to do better each time and fought for every second of the clock.

We talked about group work and what it meant to be engaged in a task cooperatively.

I saved the clerical stuff for the last day.  I used Standards-Based Grading in my classes and I wanted to make sure I had plenty of time to explain how it worked and why I use it.  The 8th graders had it last year, but I made some tweaks and needed to be clear on those.

For the 7th graders, this was an entirely new experience on top of being in middle school, an entirely new experience.  I had them read the syllabus out loud to the class and talked about what I expect from them and what they should expect from me.  I have been checking my email all weekend in case any parents had questions.  As of this writing, I've had no calls or emails for clarification.


I think this is going to be a good year.  I refuse to stress about posting every day, but will post as often as I feel I need.  Every day brings something new.
Email ThisBlogThis!Share to TwitterShare to FacebookShare to Pinterest