Posted by Justin at 5:29 PM
I began today by getting handed a note from a student who is, arguably, one of the better kids in the school.  She is nice, smart, hardworking and fun.  This is the note: 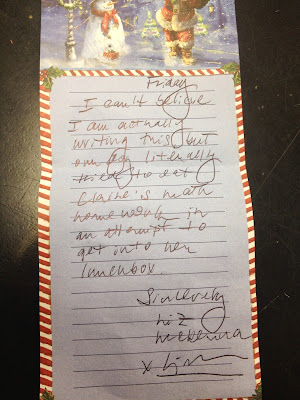 Started geometry with a great discussion about the finding the sum of a long list of consecutive numbers.  Several students came up with shortcuts that were valid and we eventually made our way to Gauss.  I was very impressed by the reasoning skills of many of the kids.  I have two or three that constantly look at me with disdain and I tried to bring them into the conversation but they were not interested.  I'm going to have to pull them aside at some point and have a discussion about body language and attitude.

After that, we had a 20 question test on concepts from Algebra.  I got to use my new GradeCam software and the item analysis reports are AMAZING!  I showed the class which items we were going to fly through, which ones we should discuss and which we need to spend a good amount of time working with.  They were genuinely interested in the data which made me giddy.  Afterwards, they got their textbooks and began front-loading vocabulary for the chapter.  I asked to the take some time this weekend looking at the questions they got wrong to determine if the problems were conceptual, or just carelessness.  Both will give valuable information and determine how we move forward.

I also gave a 10 question quiz in Math 8 on the concepts that we covered for the last few days.  The results were abysmal, but I maintained enthusiasm and emphasized that it was just a pretest to see where we were.  Their grades will not be affected by the score, but how hard they tried.  All of them tried very hard, so I was pleased.  There is a ton of work to do with these kids, but if they maintain the level of work ethic and energy that they've had so far, I think it will be good!  I also told them to try to figure out where they went wrong with each problem.

After class, a girl came up to me and asked me to call her grandmother to tell her what a good job the student is doing.  She said her grandmother didn't believe that she was being nice and doing well.  While the thought made me sad, I was very happy that I was able to say that yes, I would call.  The girl is a bit below grade level, but she tries hard and is very nice.  For those kids, I will do anything.

The last class itself went well.  I have good participation from most of the kids.  I say most because I have two who seem completely baffled as to why I don't want them sleeping in class.  Baffled to the point where I had to take their chairs away to keep them from putting their heads down.  It ended in a confrontation where the old me came out.  I wasn't pleased.  I'm clearly going to have a talk with them once my temper has cooled off.  I also plan to call home this weekend and have a chat with the parents.

I am exhausted.  My allergies are flaring up, I ran this week several times, although not as much as I should have, and I have ACTUALLY been doing work!  I've been getting to school 90 minutes before the students get here and I still just barely get everything done on time.  If you ask my own teachers, or my parents, they will tell you that I spent more time and energy in school avoiding doing work than it would take to just do it.  Much of my professional career has been the same way.  I've always done exactly as much work as I felt I needed to and not a single bit more.  I still feel the same, so I guess that means I think I need to do more work.

Next week will be another 4 day week, so hopefully I won't waste the long weekend.  I have a ton of things that I should do, like finding projects and activities for my classes.  Lots of time to fill and I don't want to waste it on worksheets.

Interestingly, the students in Math 8 would rather do hundreds of mindless problems than an activity that makes them think.

Goal for this year: Reverse that!
Email ThisBlogThis!Share to TwitterShare to FacebookShare to Pinterest