Posted by Justin at 3:59 PM
Over the last three days, all of my classes worked on the same activities.  Yesterday and Wednesday, the results were very similar.

Today, they were not.

As we progress, the current ability levels of my students are starting to become more apparent.  The activity for today was as follows:

Jack and Beth go to their grandfather's farm.  He raises ducks and sheep and currently has 9 total animals.  In the winter, he puts shoes on their cold little animal feet.  He has 26 shoes total.  How many of each animal does he have?

Work with your group to SHOW how you found your answer.


I explained to them that I was much less concerned about the answer than I was about the method and their ability to share it.  (I can explain my thinking and try to understand others.)

The first thing that I noticed was the differences in method.

The Math 7 students took to the problem like ducks to water.  They dove in and really enjoyed drawing pictures to illustrate their methods. 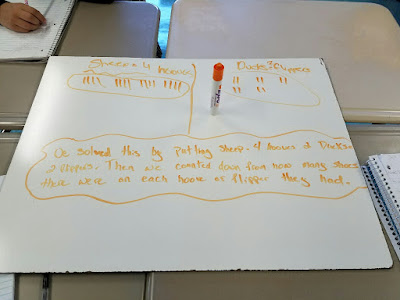 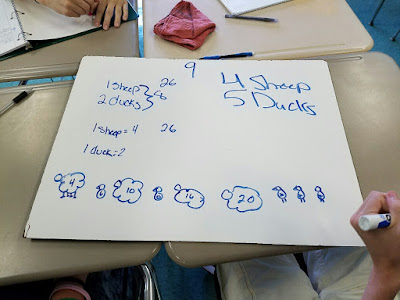 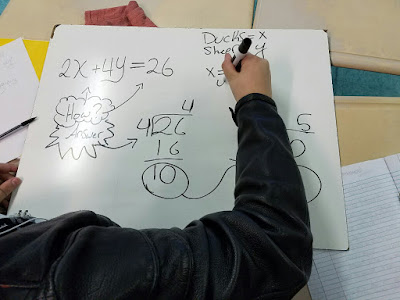 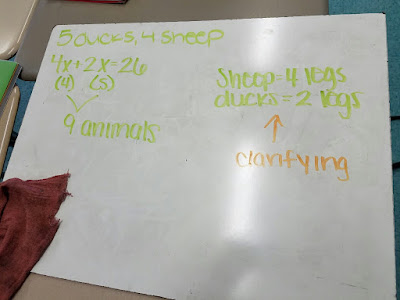 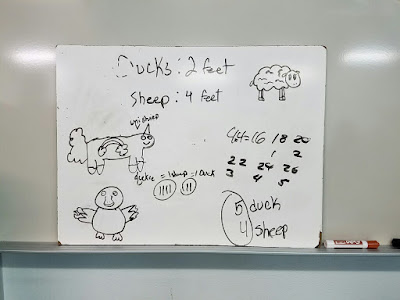 The students in Integrated started with equations.  They knew that in math you're supposed to use equations, but were unsure of how.  Several of the groups found the right answer "in their heads" but had difficulty explaining their thinking. Even if they couldn't explain how, all of the groups found the correct answer and were able to talk about the method that they used, even if it was in vague terms.

Them: "There were 5 ducks and 4 sheep."
Me: "How did you come up with those numbers?"
Them: "That's how many you need to have the right number of shoes."
Me: "I get that, but my question is how did you KNOW that those were the right numbers? How did you get to them?"
Them: "They are the ones that work."
Me: "How do you know that other ones don't? Did you try other combinations? Did you guess and check? Was 5 ducks and 4 sheep your first try?"
Them: "Those were the numbers that worked. We checked them and they worked."

This conversation occurred with several groups in several classes.  It seems fairly clear to me that they are not used to having to explain their answers or reasoning.  This is actually expected and helps me to focus were I need to put my energy this year.

Interestingly, the younger kids were better at explaining their reasoning than the older ones.  I'm not sure if this is because the older students have been conditioned that their answers are more important, or some other factor, but it doesn't really matter.

I have my work cut out for me if I want them to be explaining.  I wrote out my own explanation and method, modeling the kind of work I wanted to see.  I made it very clear that it wasn't my particular method that I was looking for, but rather the fact that it was clear, ordered and logical.

The mother of one of my students told me that her daughter LOVES my class.  She's been thinking about sandwiches for 2 days now.

One of the other faculty members told me that she just loved how positive and upbeat I was, how it was a breath of fresh air.

This year is off to a pretty good start.  I plan to take this weekend to sleep, plan, run, sleep and sleep.