Posted by Justin at 3:51 PM
Over the past 4 days, through the clever use of discussion, I've been avoiding what my students would refer to as "math."  Today I dove in.

My Math 7 and Pre-Algebra classes played the Zero Game from Julie.  It's a great way to help them review integer operations, absolute value as well as consider strategy.

Quick Rules:
Cards are dealt 1 up, 1 down to each player.
Black cards are positive, red are negative.
Players can either get another card (or 2) or stay were they are.
Player whose total is closest to zero at the end of each round is the winner.

After a couple of hiccups and false starts, the groups seemed to really enjoy the game.  Since my 2nd period only has 4 students in it, I played with them for the period. 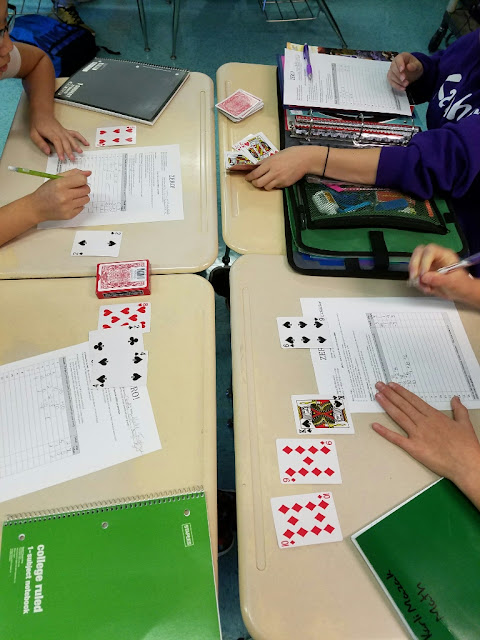 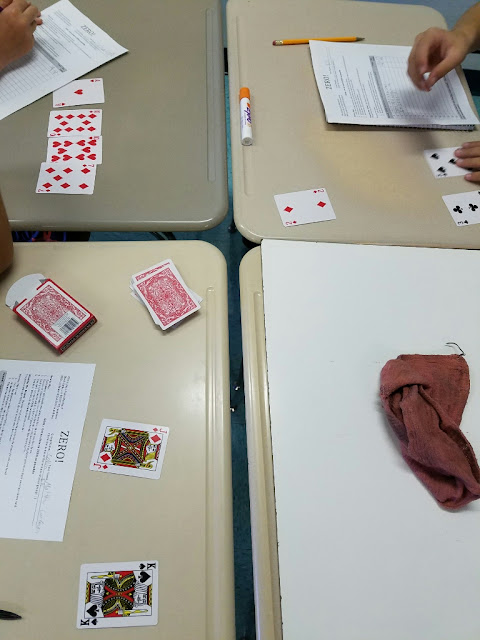 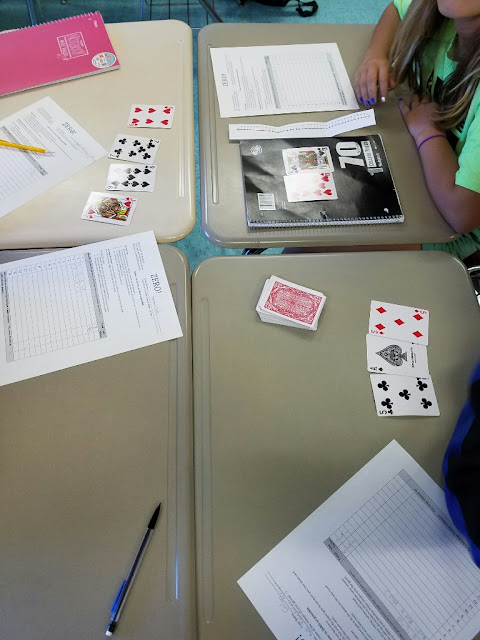 It became apparent fairly quickly that my 7th graders are a bit rusty when it comes to number operations.  Thankfully, some brilliant teacher had them attach number lines to their notebooks that were easily accessible. Even so, we have some work to do.  In the next few days, we will be covering Order of Operations and I have a pretty nice foldable for them to add to their notes.


In the Integrated Algebra class, I took a look at the textbook that they normally use and saw some good stuff and some...not so good.

They begin with a discussion of data interpretation, which I love.  They gave the following chart and question: 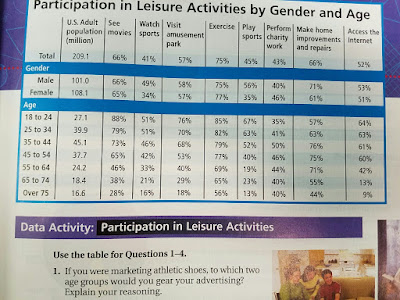 Before we got to that question, I asked them to just look at the data.  "What do you notice about it?"

A few kids noticed that the percentage of people using the internet during leisure time drops as age increases.  They noticed how women were more likely to exercise while men were more liked to play or watch sports.

When I asked them what they wondered about and what jumped out at them, a few commented on the slight uptick in playing sports for 65 to 74 year-olds from the previous group.  I asked them to speculate on why they thought that might happen and we talked a bit about retirement and golf.

Then I asked them the marketing question that was in the book.  The majority of students gave the answer that the book was expecting (18 to 24 and 25 to 34) because these groups had the highest percentage of users who exercise during their leisure time.

One girl asked if we could somehow include "Play Sports" in our calculations because those people would also use athletic shoes.  We had a brief conversation about whether or not we could and decided that there was probably overlap already and we didn't have enough information to do anything else.

One student made an interesting observation:

"The percentage of 18-24 year olds is higher, but there aren't as many of them as other groups."

Then the calculations began... 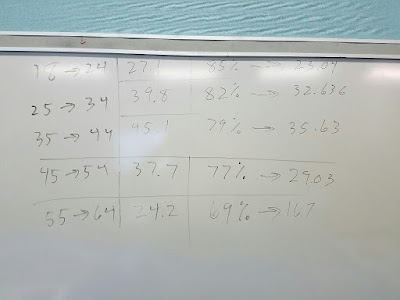 We had a fairly interesting discussion about the results and the implications.  "In addition to the fact that there are, numerically, more people in a different age bracket, why else would you might not want to market athletic shoes to the younger crowd?"

I think we are going to have interesting discussions in this class.
Email ThisBlogThis!Share to TwitterShare to FacebookShare to Pinterest