Posted by Justin at 2:44 PM
Yesterday, I had a couple of upperclassmen observe my Pre-Algebra class.  Following a discussion about their experience, I asked one of them to write up her thoughts for me.

The following is what she wrote without any edits by me.

Before I begin, I’d like to first and foremost state that I love learning. I truly do. There’s something valuable in everything, and no information is useless. There’s always something to learn, to improve upon, to be better at. Everything has a lesson. Even if the information is familiar, something new can be still be learned. There’s no reason not to listen, especially to a teacher. They deal with teenagers all day. The least I can do is listen to them and respect them. They have a lot to say and a lot to teach, and once again, all information is valuable. However, I think I underestimated just how much I’d learn within two days of observing Mr. Aion’s class.


I was grateful he’d even let me sit in his class while he was teaching to begin with. I really just wanted somewhere somewhat quiet to sit during my lunch period to read on my phone or just catch up on my homework. I’d had some good, thought provoking discussions during my study hall with him, so I was looking forward to the experience subtly. To be fair, though, I was on my phone, even if Mr. Aion was teaching. However, I still listened into the class discussion. Watching someone teach is a much different experience than being a student. It’s fascinating to see the students work through something and figure it out. I really enjoyed the questions Mr. Aion asked. When you’re not concentrating on figuring the concept out, it’s much easier to see where the questions are headed and why they’re being asked.  Although, I’m already very familiar with the material, so that definitely aided in knowing where the class was going. Even so, I couldn’t help but answer the questions he was asking mentally. They were probing, asking them to figure things out step by step. I personally quite like that approach to learning. People tend to understand better if you let them figure it out themselves, and that’s what the questions were doing. They were all building up to understanding the concept at hand.


That wasn’t all I learned listening in, though. There was an entirely new way to both solve and think about Pythagorean theorem and distance formula problems that both my friend (who joined me during my second day watching) and I had never learned or really considered. It was a way of relating the numbers back to the triangle. When my Pre-Algebra class (god, that was years ago) covered solving for the hypotenuse length, we always did it through the method of plugging the given variables into the formula. I didn’t even cover the distance formula until I was in Geometry, I always was aware that it was solving for the missing length, that I was using the other sides to do so. But I’d never really considered it the way that Mr. Aion explained it. I think that’s a problem in math classes -- kids are given formulas and are taught how to use them, but that’s it. I can manipulate the numbers, yeah. I know what they mean. But there’s not always this click, this connection, between the numbers and the application of those numbers. It’s almost as if you’re solving a puzzle, and you know how the pieces fit. You know how to complete it, but you can never really see the completed picture to know how all the pieces fit. The way that Mr. Aion explained this, though, made my friend and I see the big picture. It clicked. It was this entirely new way to solve the problem, and it was absolutely exciting. It was this moment of sheer joy, of ‘I get it’.  I don’t get moments like those a lot in my education. I tend to ‘get it’ pretty quickly, so the feeling doesn’t get me excited like it used to. Even when I research and learn in my spare time, it’s not as exciting, unless I decide to take up a particularly difficult topic. This was exciting. It was new. It was this entirely brand new way of solving and thinking and conceptualizing. Personally, I don’t think that happens a lot in classrooms. That might just be my experience, but I don’t see a lot of those ‘a-ha’ moments. This was revolutionary for both my friend and me. So revolutionary, in fact, that we started whispering about the next problem Mr. Aion was going to talk about with his students, attempting to figure it out. He called us out for talking, and let me tell you, that is an absolutely mortifying experience. Having the eyes of about 15 seventh graders and a teacher on you is fear inducing. I was extraordinarily relieved to that no one was upset and that we were really just making a good point. Quite frankly, I was disappointed that we had to leave to go to our assigned class. However, I’m looking forward to coming back to the class, and I sincerely hope I get to have more experience like I had today. 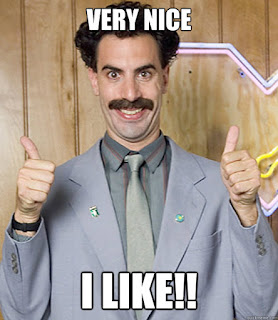