Posted by Justin at 6:09 PM
Warning: If you already know the basics of Standards-Based Grading and how I've been trying to work it into my class, or if you don't care about my exposition, skip down to the baby shark below.

At the beginning of the 2016 school year, I changed school districts. Over the previous few years, I had been reading quite a bit about Standards-Based Grading systems and the change of district seemed like the perfect time to implement a change in grading that I knew was going to be daunting and massive.

Under a standards-based system, students receive grades based on their progress and proficiency through a set of clearly defined standards and objectives.  Since I was going to be teaching 7th and 8th grade students, I was using the curriculum standards for those content areas as laid out by the National Council of Teachers of Mathematics and the Pennsylvania Department of Education. Then, I took each standard and converted it into an actionable statement in student friendly language, such as "I can solve linear equations that have rational coefficients."

During the first year that I worked with SBG, I used a 4 point scale, assessing student performance on tasks and assessments based on the approximate following rubric:

4: I GOT this! I can teach it to someone else!
3: I get this, but I need to be more careful with my work or explanations
2: I kind of get it, but we should go over it again
1: What are we talking about again?
0: I didn't assess this skill


Since I was teaching in a traditional grading system (one where all student grades and feedback are boiled down to a single number at the end of the semester/year), I needed a way to convert the 4-point scale into a 100-point scale.

Changing all of those to percentages was super fun!

Last summer, I attended a session on SBG at Twitter Math Camp and, after speaking with several other teachers, decided to switch from a 4-point scale to a 10-point scale!

This let me add a bit more subtlety to the grades and provide more accurate feedback to the students.

This past year, I implemented the new scale and my students seemed to like and appreciate the change.

My grade book this past year looked like this: 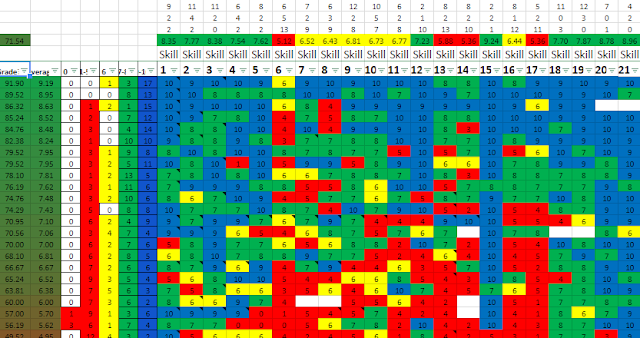 One of the philosophical components of SBG is that students are not assessed on their behavior or habits, but only on their progress and demonstration of the content standards.  This meant that I didn't have homework or participation grades.  Another important tenet of the system is the understanding that students learn at different paces.  Since we want growth and want students to learn from their mistakes, I offered reassessments on any skill in which a student felt they could do better.

In order to do the reassessment, however, students needed to show that they put in the effort to learn the material.  This meant doing practice problems and correcting their assessment errors.

After a conversation with my principal, I added homework and participation grades back into the mix, but I wasn't happy with how I did so.  I wanted/needed to make some changes, but wasn't sure how to do it.

I woke up this morning trying to figure out how to modify my system to maximize the benefit to my students while retaining emphasis on the things I wished to...emphasize. **looks for thesaurus**

I attended an afternoon session at Twitter Math Camp today that was run by the brilliant Bob Janes.  He has been doing this work for a few years and the conversations that we had as a group pushed on some of the issues that I wanted to fix. 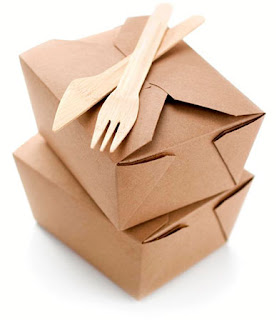 My first major take away (see what I did there? Take-away? Get it???) was another change in the scale. I had already been thinking about this after a conversation with the amazing Anna Vance, who happens to have a post about this exact idea at the top of her blog right now! (ANNA! Write more! The world needs your brilliance!)

I VERY much like these idea because it allows for the subtlety and differentiation in feedback, but lumps the varying degrees of what we traditionally call "failing grades" into the category of "not yet" while still giving them credit for their work and thinking.

The other huge piece with which I've been struggling for a while is about the Standards of Mathematical Practice and how to integrate them into the assessments. I also need to integrate homework and participation grades into the overall scores.  Bob talked to us about what he referred to as "Scholarship Standards."  These are the skills that are transferable to other learning environments and are not content based.

He writes it up MUCH better than I could, so you should read more about it on his blog.

My favorite part of this was the re-framing of homework, study skills, participation, preparation, etc. as Standards of Scholarship.

When I re-write my syllabi this fall, I will be changing the section on grading to talk about "Content Standards" and "Scholarship Standards." This reframing also gave me a way to work with my students on assessing their development of the Standards of Mathematical Practice.  They know what they are, but I don't spend enough time working with them in a formal way on what they should look like.

There is much to process.

In addition, I began this year's Twitter Math Camp by meeting someone with whom I've been interacting online for a few years.  She told me that my blog has made such a huge impact on her life (now that I think about it, I didn't ask if it was a positive impact...) and that reminded me of something important.

I began this blog to share my struggle and to help other teachers see that they are not alone.  In her keynote today, Julie spoke about how many of us look online, see the amazing things that other re doing and feel that we can't live up to those examples.

She was making the point that we are all amazing just by doing what we do.  She even gave out stickers to everyone (Oprah-style) that read "You are not an imposter. You are enough."

For me, I think the converse of her message is also true. Even those people online who are sharing amazing things and appear to be amazing teachers have days that are terrible.  When we only share the good, it can be scary to those of us who (frequently) have bad days.

There are lots of things that I don't do well, such as dance, plan lessons, eat healthy food, contact parents as much as I should, organize my desk, speak at a reasonable volume, dress myself, or finish a sentence without rambling incoherently about how much I like Doctor Who and Dungeons & Dragons and how I'd love if someone would make an RPG for Doctor Who and yes, I know there is one but it isn't very good and what was I talking about?

One of the things that I think I do fairly well is reflect on my teaching practice.

I plan to keep this blog again this year.  This profession is too important, and too hard, to do alone. We are in this together and I will share what I can.