Posted by Justin at 6:40 PM
Today was a good day!  I still feel woefully under-prepared for my classes, but it's getting better.  I find myself scrambling around to get ready when before I was perfectly fine to wing it.  I'm remembering how to fill 90 minutes without wasting it.  It has been a while.

My geometry class is filled with some really great kids who are bright and eager to learn.  Those who aren't as eager are being dragged along by the rest of the class.  The very BIG class in a very SMALL space.  This is the group whose parents will be showing up to back to school night and wondering why they can't fit in my class.  That night should be interesting, but it's a month off, so I'm not going to worry about it.

I have to say that, so far, I like this group of kids MUCH more than I liked the kids last year.  They seem nicer to each other and to adults and much more receptive to education.  They are more free with smiles and so, in turn, am I.

Last year, the percentage of students that I actually liked was very small.  It made me feel awful about coming to work and being a teacher at all.  I know that we will never like ALL of our students and that isn't necessarily part of our job requirements, but it certainly makes the job more enjoyable.  I also want to clarify that just because I don't like a student, it doesn't mean that I don't see their value as a person.  I just don't want to hang out with them.

This year, however, I really like a large portion of my students.  It's a very weird feeling for me.  It has been a long time since I've been able to look down the hall and not feel utter disappointment at the wasted potential that I see there.  Now, I'm starting to feel pride in the accomplishments of students, some are mine, some I don't even know.  It feels wonderful.

I know how dark and cynical the previous paragraph is.  Perhaps that will shed some light on why, before this year, I was planning to leave teaching altogether.


In any event, to the classes!! 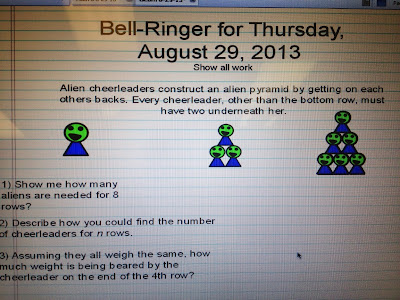 For the second question, one student actually came up with 1/2 n(n-1)! Holy crapamole! (That is a terrible taco topping, by the way.

My favorite part of today was that during the Bell-Ringer for geometry, I discovered that how I had been thinking about question 3 was completely wrong! In the middle of the discussion, I had to readjust my thinking because of an off hand comment that one student made to another.  It was a great moment!

According the geometry agenda from the high school teachers, I was supposed to be reviewing algebra equations.  I didn't want to just give them a sheet and ask them to solve, so we played Function Detectives!

In this game, I have functions under the black squares.  Students in the class will say a number and I will tell them what the output is.  They then need to figure out the function.  They LOVED it! I was expecting that it would take 4-6 guesses until they got the function, but in both cases here, they got it in two, the minimum possible for linear functions!

I asked if they wanted a harder one and they said...YES!  So I picked a quadratic, which they got in 3-4 guesses.  These kids are amazing.  It wasn't just one or two kids either.  I made sure to move around and ask quiet students for their input.  I used the game as a modeling exercise, broke the students into groups of four and had pairs made up a function to quiz each other, while I circulated and helped stuck groups with strategy.  It was a fantastic success.  There was only one group that needed constant attention and it was because two quiet people ended up with two chatty people.

I think I'll be able to let this class pick their own groups.  They are loud and talk a ton, but it's accountable talk.  This is WAY outside of my comfort zone.  I know that quiet doesn't always mean learning and noisy doesn't always mean not, but this level of volume associated with this level of learning is not something I'm used to.  I guess I'll be learning a ton as well. :-)

In the Math 8 classes, we worked on properties of integers.  I gave them examples and we had a discussion (not just lecture) about the properties and what they mean.  I got to use my Oprah analogy when talking about distribution, which is one of my favorites.

Me: "When Oprah decides she's going to give out an iPhone, does she give it to just one person?"
S: "No. She gives it to everyone."
Me: "Right! 'YOU get a new iPhone and YOU get a new iPhone! EVERY BODY GETS A NEW iPhone!' Now lets look back at the problem 3(x+2).  In this problem, the 3 is Oprah and the (x+2) is the studio audience.  You have to make sure that you're fair and give that three to everyone in the audience!"

It really resonates with the kids and it helps when the question of (x+2)*3 comes up.

Me: "If Oprah is on stage and gives out iPhones, who gets them?"
S: "Everyone!"
Me: "Good! Now, if Oprah is the back of the audience and gives out iPhones, who get them?"
S: "Everyone!"
Me: "So, does it matter if the 3 is in front or behind the parentheses?"
S: "No!"
Me: "Why not? What property tells us that?"
S: "Commutative property of multiplication."
Me: "AWESOME!! You guys RAWK!"

This was an actual conversation.

The kids did very well until I got to an activity about process that had no numbers.  They were asked to analyze a statement and say what they would do to solve it.  For example:
Beth knows how many miles she ran this week.  She also knows how many hours she ran.  How can she figure out her speed in miles per hour?

They had tremendous difficulty figuring out what was being asked.  I asked them why and they said there were no numbers.  What would you do if there were numbers? I guess I would divide the hours by the miles. To find 'miles per hour?' Yeah!

We tried putting numbers in, arbitrary ones, and they got it almost immediately, but on the next one, they weren't able to figure it out and didn't think to put numbers in there to try like we did with the previous one.  It was frustrating and confusing.  Clearly, I need to work on helping them make connections.

The best non-student part of my day was the after-school faculty meeting.  These are normally very dry and procedural, or run by yoga masters who want us to employ yoga in our classrooms.  This one, however, was AMAZING!

The fact that I presented was totally unrelated to my enthusiasm for the meeting.

I gave a Storify presentation about 4 apps and utilities that I will be using in my class this year, including Storify itself! (Very meta, I know!)  It started of a little slow, but I was able to walk around the room, gathering attention the way I do in class.  I prepared 6 scantron tests for random teachers to demonstrate GradeCam.  They were suitably impressed by the analytic reports generated.  I linked to my school web page to show that I could embed the feed from Remind101 for when I text my homework assignments to my students.  I gave participation points to faculty members, publicly rewarding them through Class Dojo, while chastising those who weren't paying attention.

The presentation was very well received and I had several people come up or text me afterwards wanting to know more.  I told them that I would be happy to help them set up any of the programs and help in any other way that I could.

I left work feeling tired and happy.  I could get used to this.

Now, what am I going to do tomorrow...
Email ThisBlogThis!Share to TwitterShare to FacebookShare to Pinterest