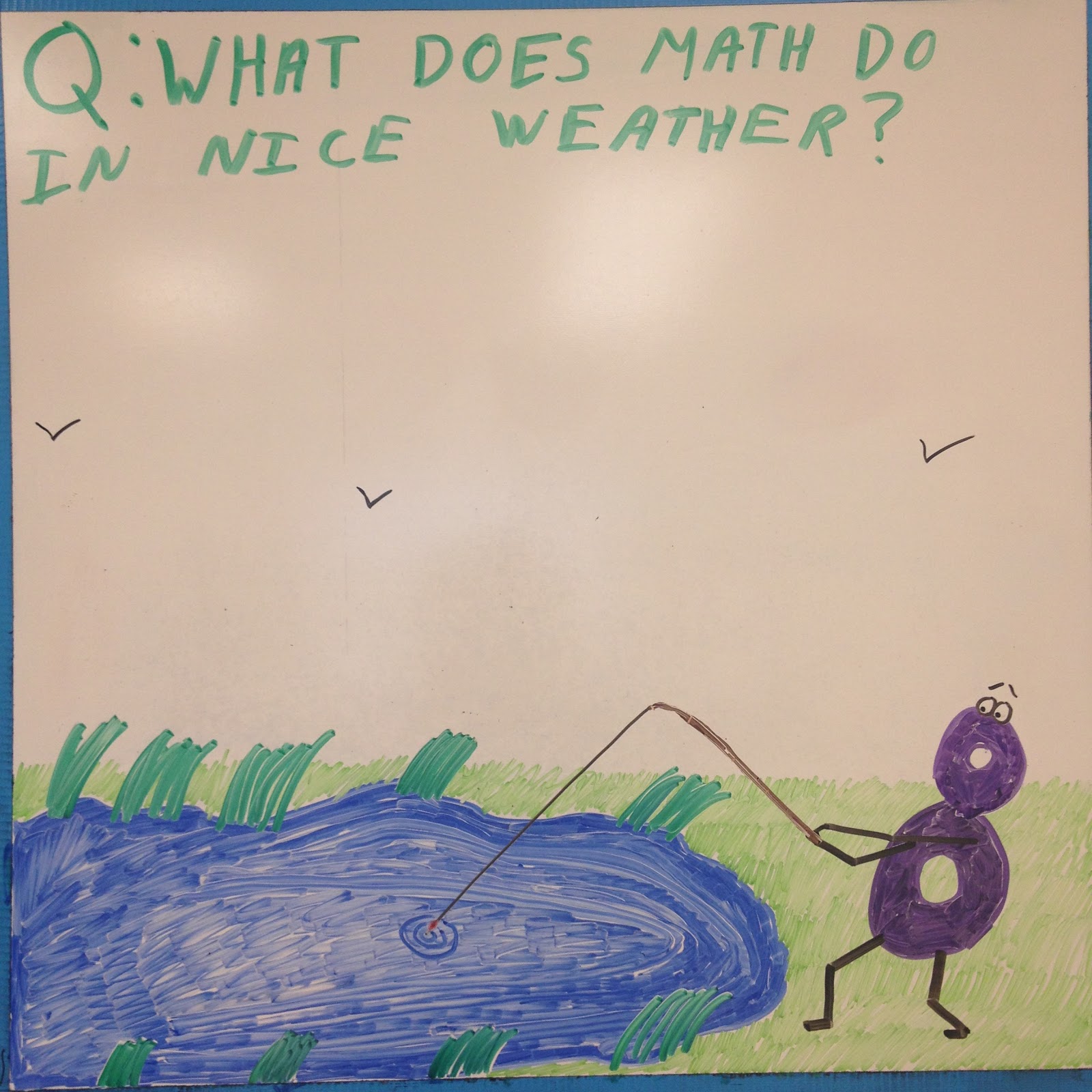 My geometry student have amazed me with their creativity and ingenuity.  They presented their finished (and almost finished) games to the class and I was incredibly impressed.  Allow me to present the games to you, my loyal readers, in no particular order. 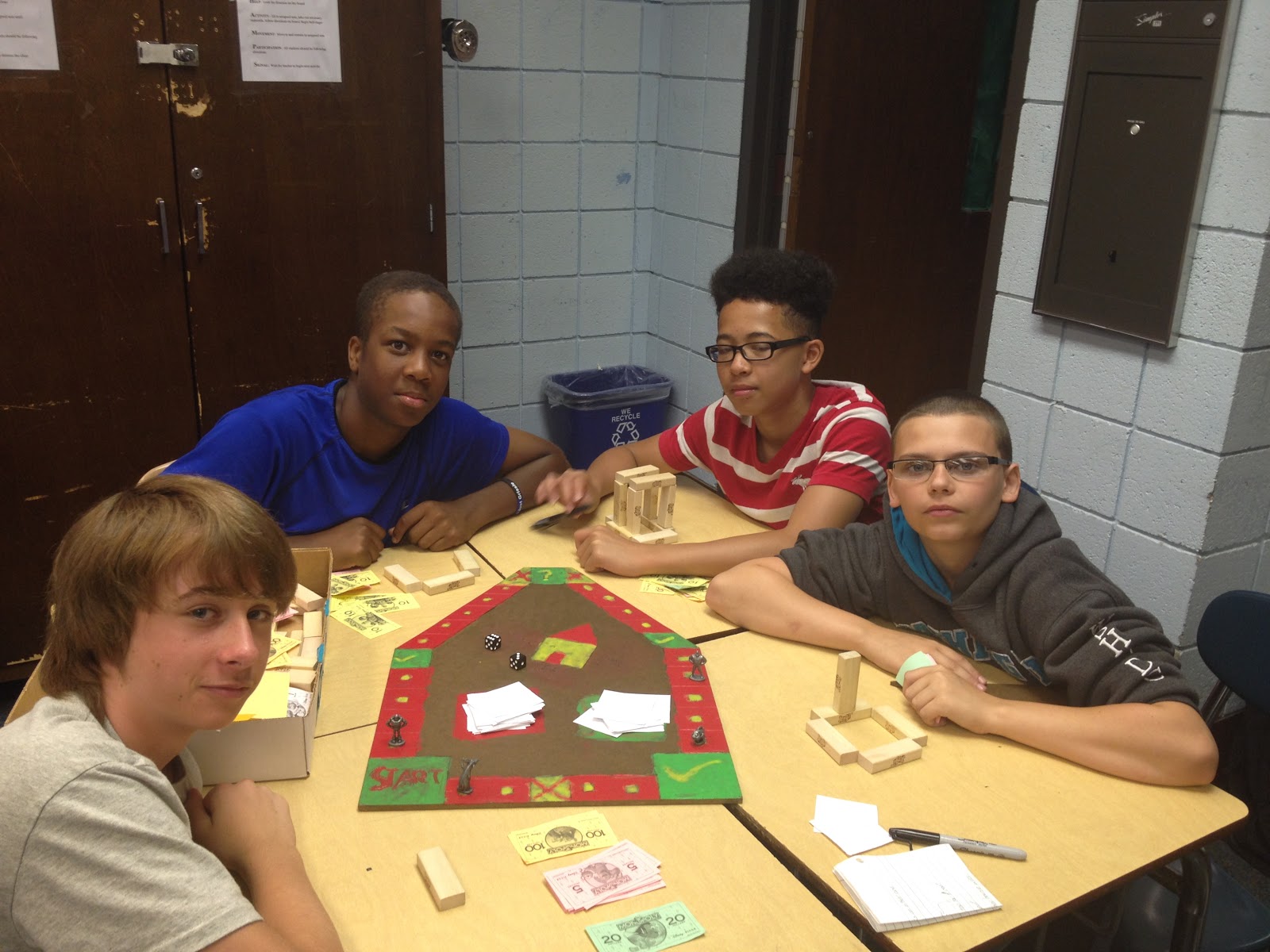 This is a game of resource management and construction.  Players move around the board according the role of dice, purchasing blocks to construct a house.  Across the board are spaces where players must draw cards that provide them with either positive or negative consequences. 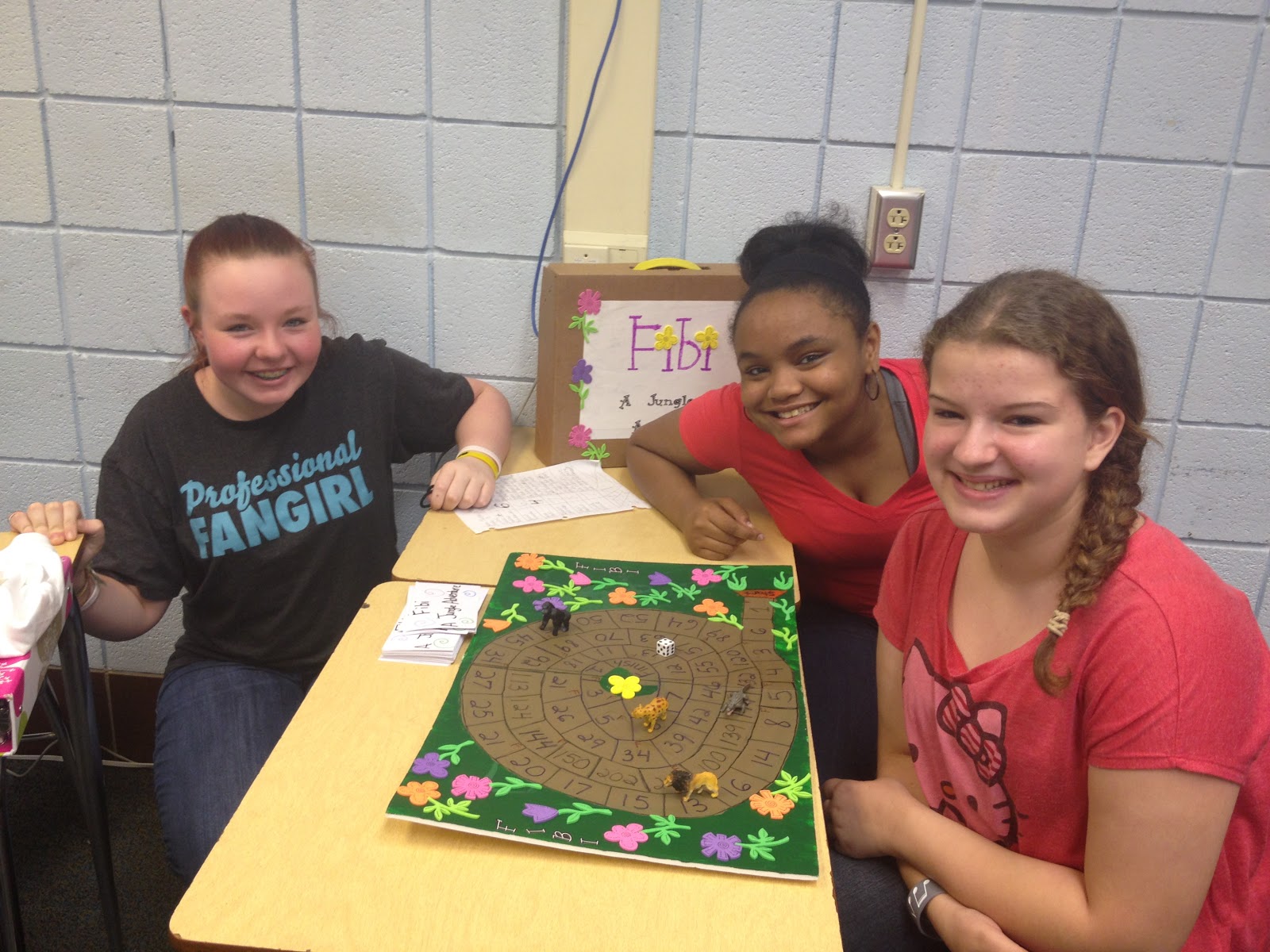 Designed to help younger children become familiar with the Fibonacci sequence and practice their basic addition and subtraction skills, this game has players traveling in an ever-tightening spiral in a race to save the jungle.  Players must land on a space numbered with a member of the Fibonacci sequence or go back several spaces.  They do, however, have the opportunity to use their integer cards to add or subtract to obtained a needed number. 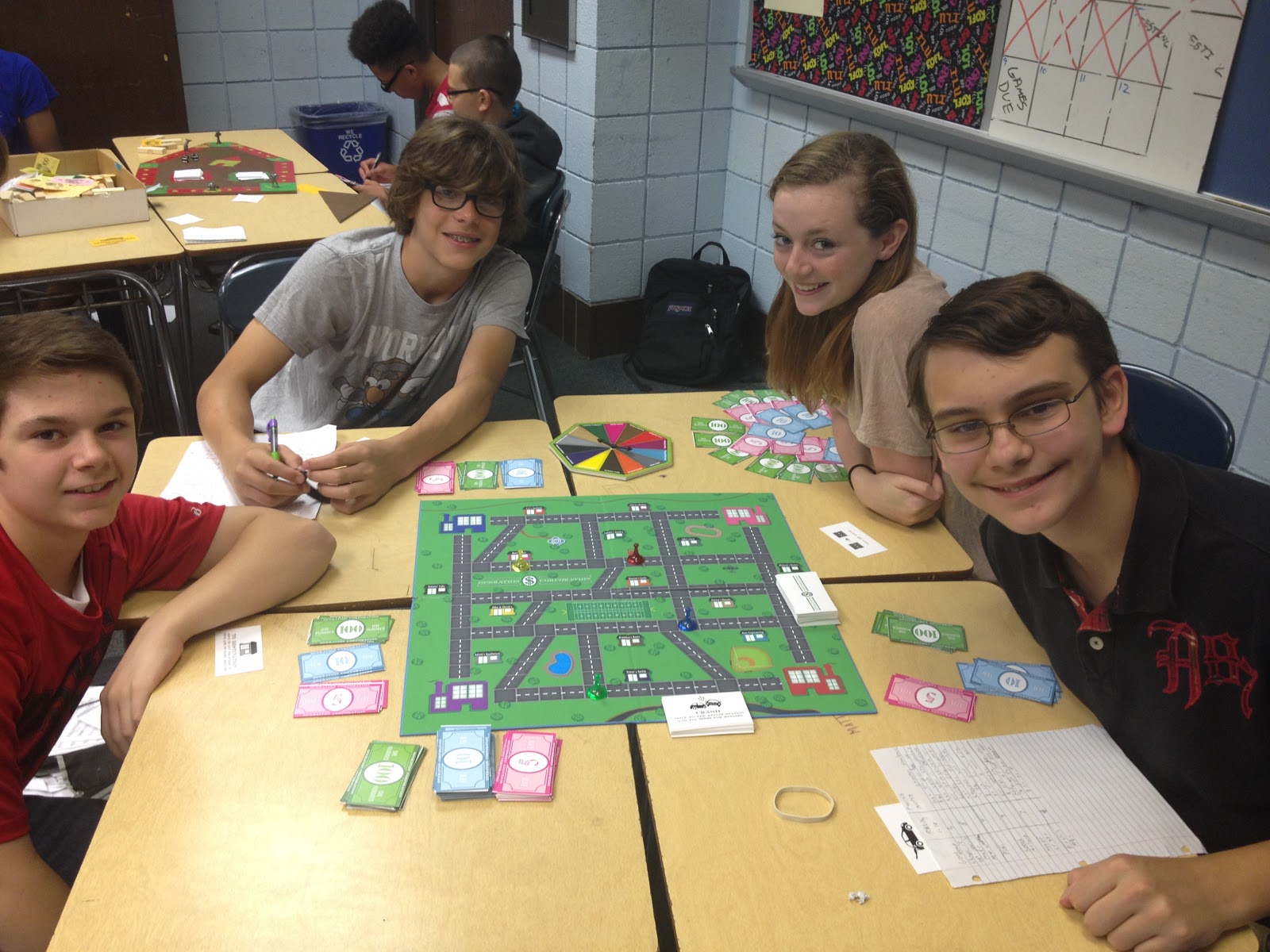 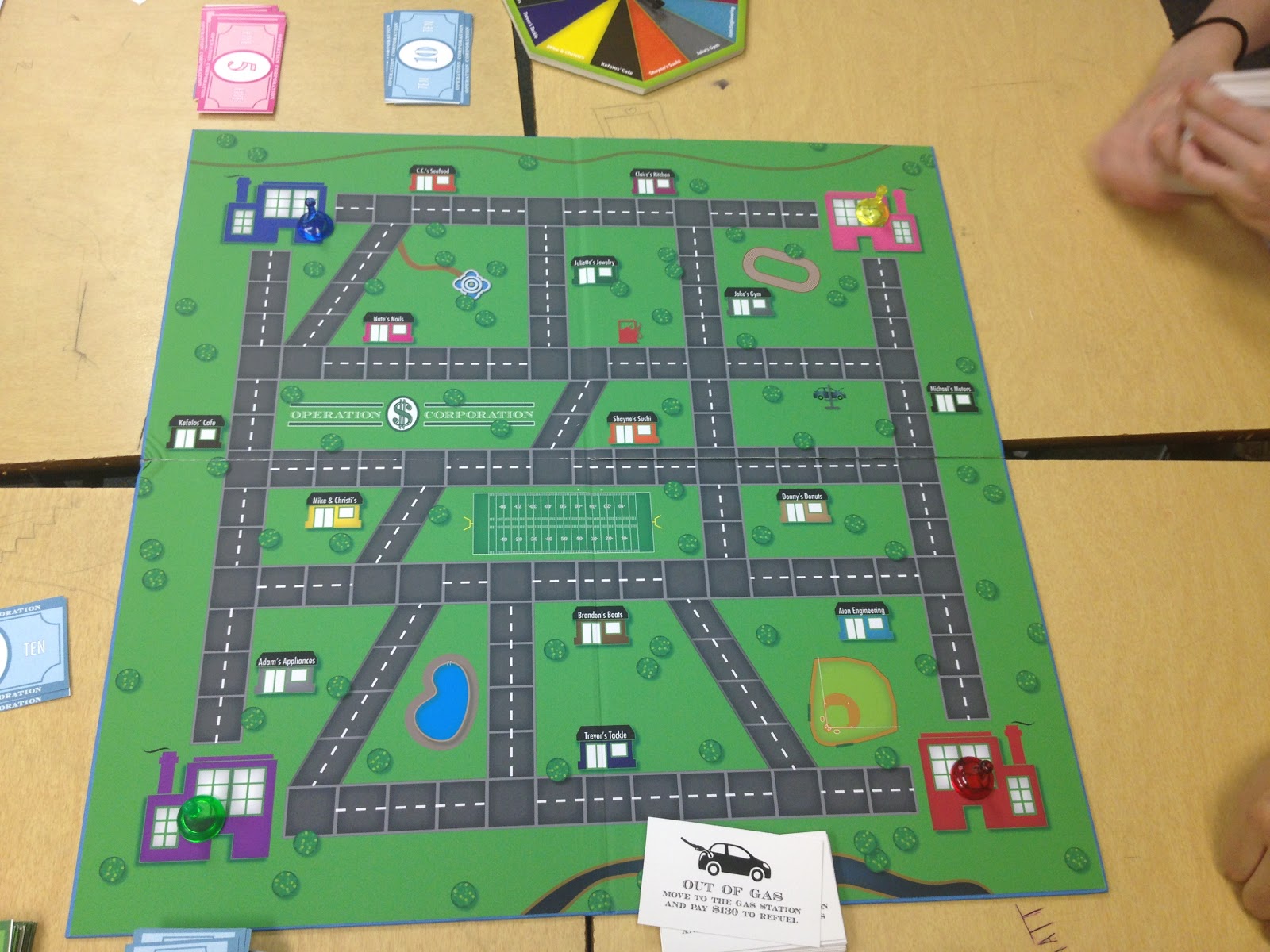 This game is a logistics primer for players looking for more involved gameplay.  Each player is the owner of a business that needs to deliver it's products to three franchises per round.  The player must calculate the shortest route to each delivery point because, while they make money for making a delivery, it costs them based on the distance traveled.  The player with the most money when another player goes bankrupt is the winner. 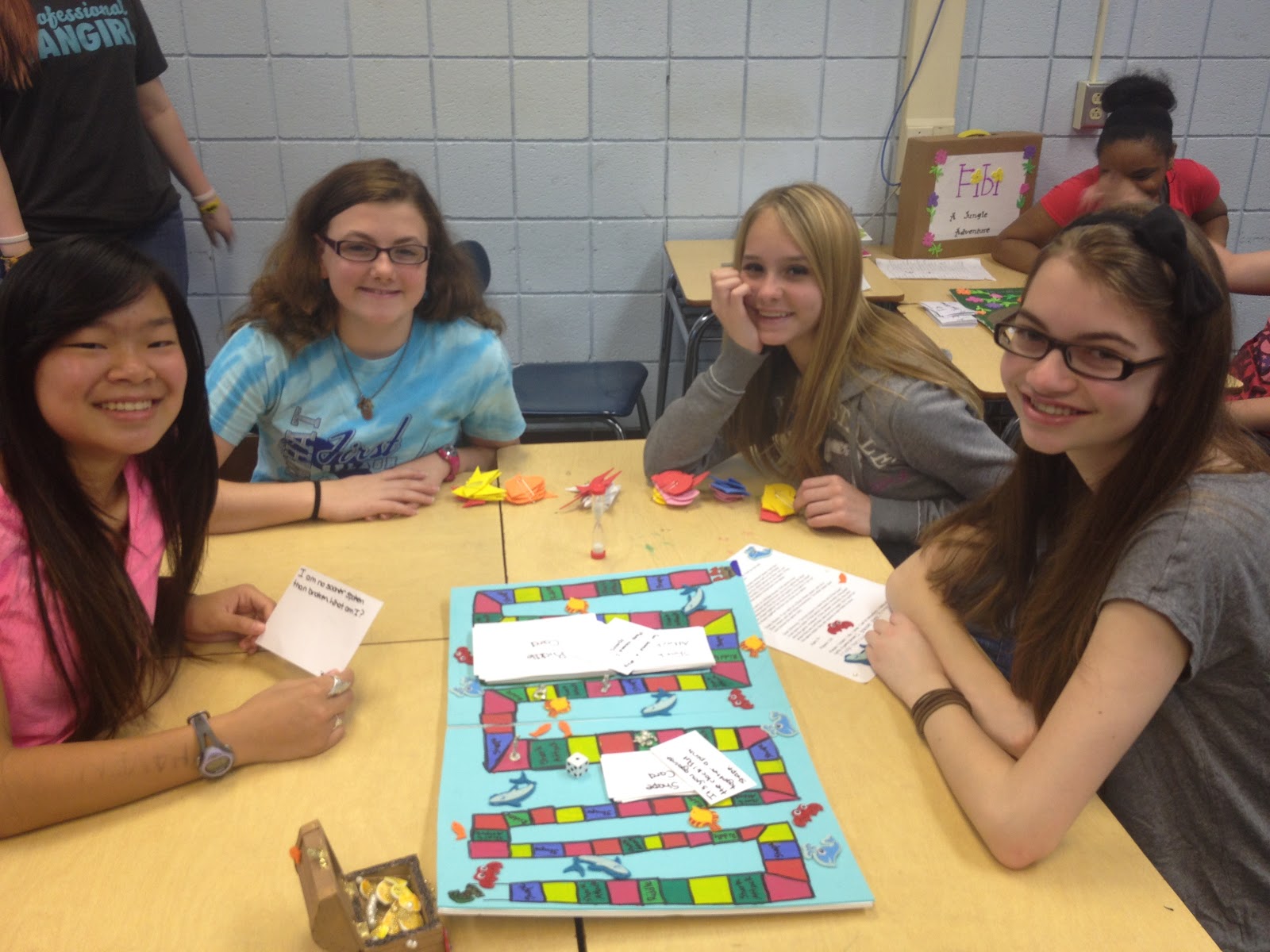 A game of visual and mental puzzles, players work their way across the board solving riddles in a battle of wits against their fellow players. 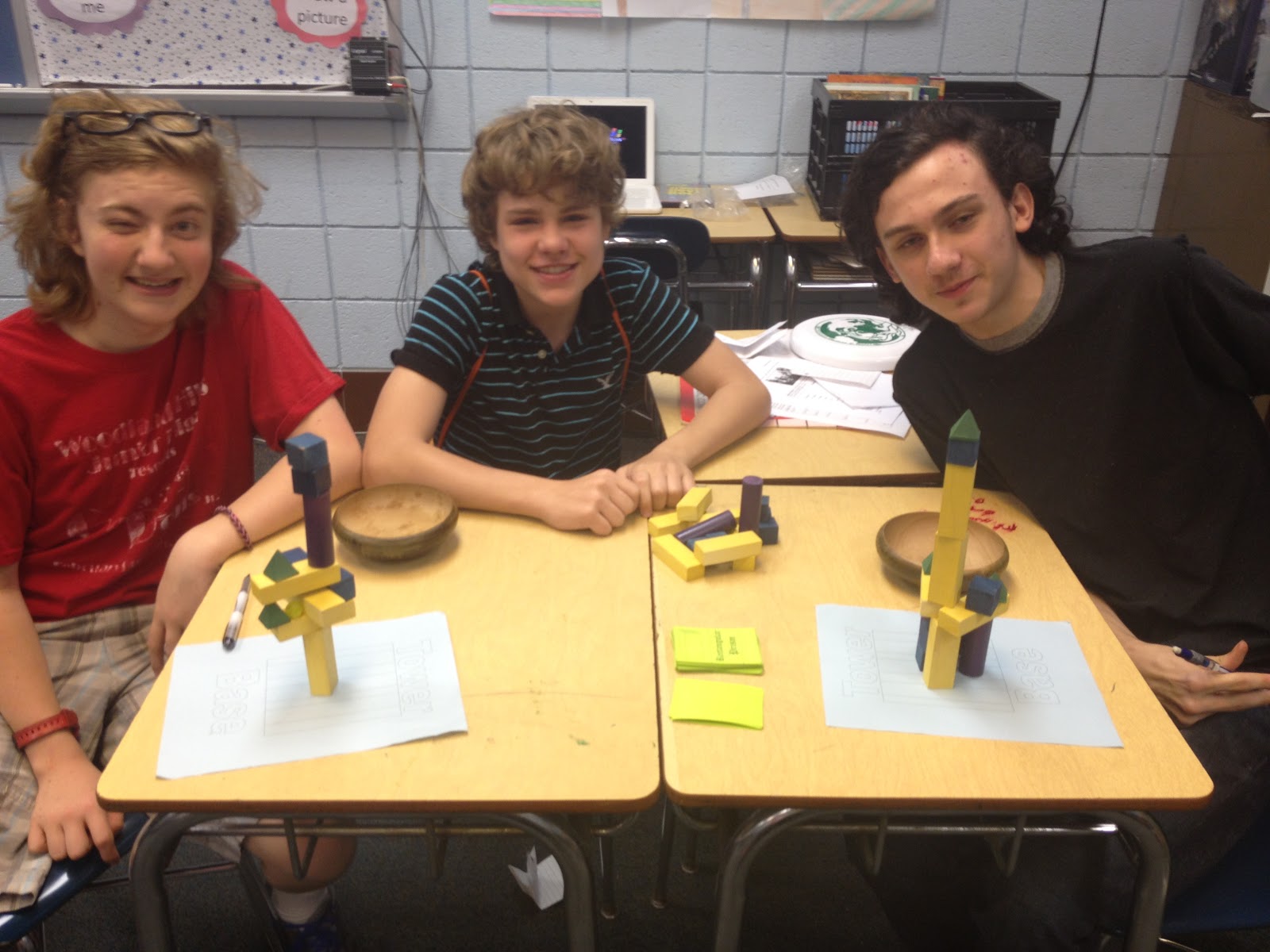 Aim and geometric construction reign in this game.  Players take turns drawing cards with geometric solids and throwing them into their opponents bowl.  When a piece lands in the bowl, the players uses that piece to construct the tallest free-standing tower they can while trying to sabotage their opponent with difficult pieces. 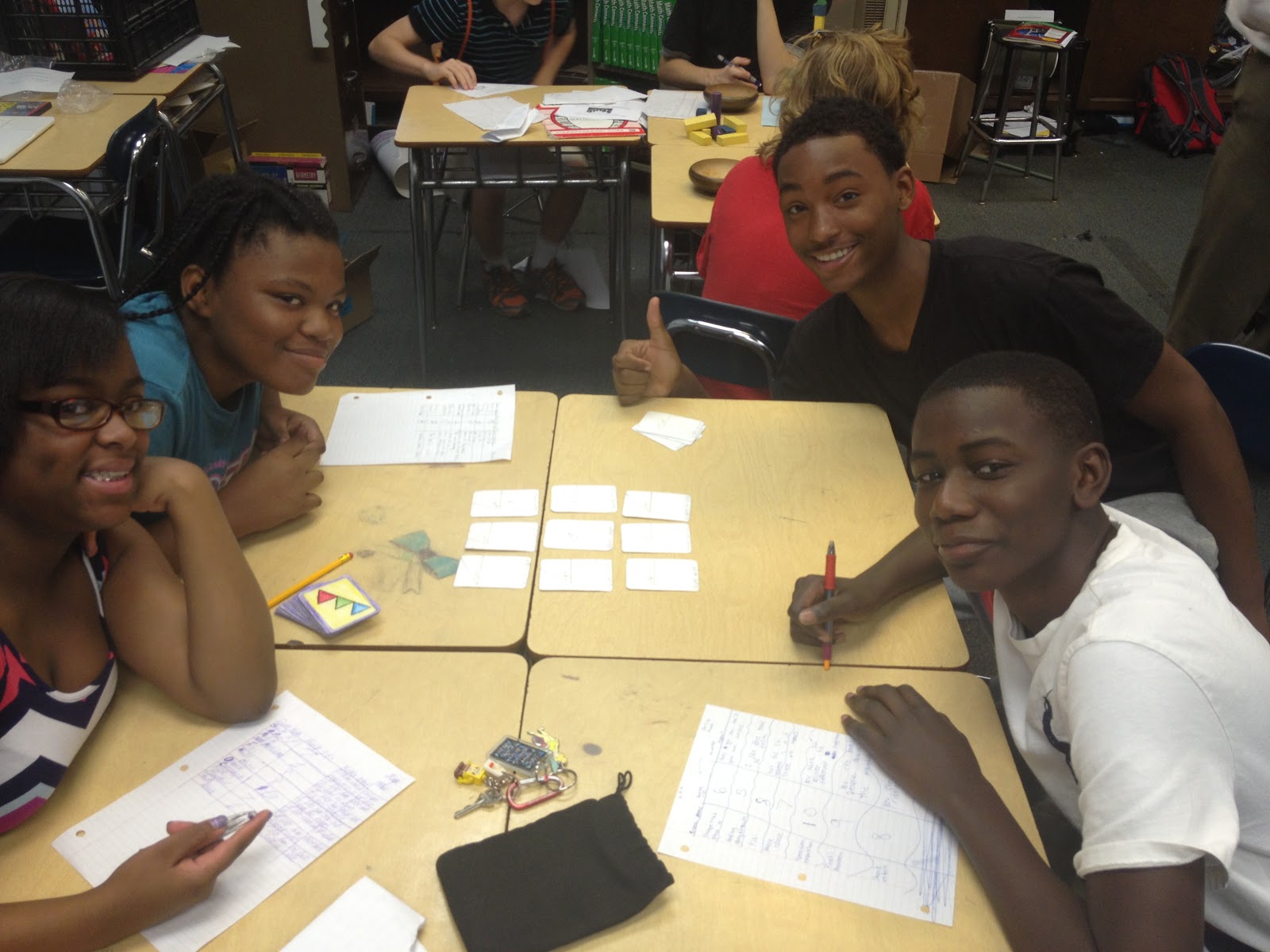 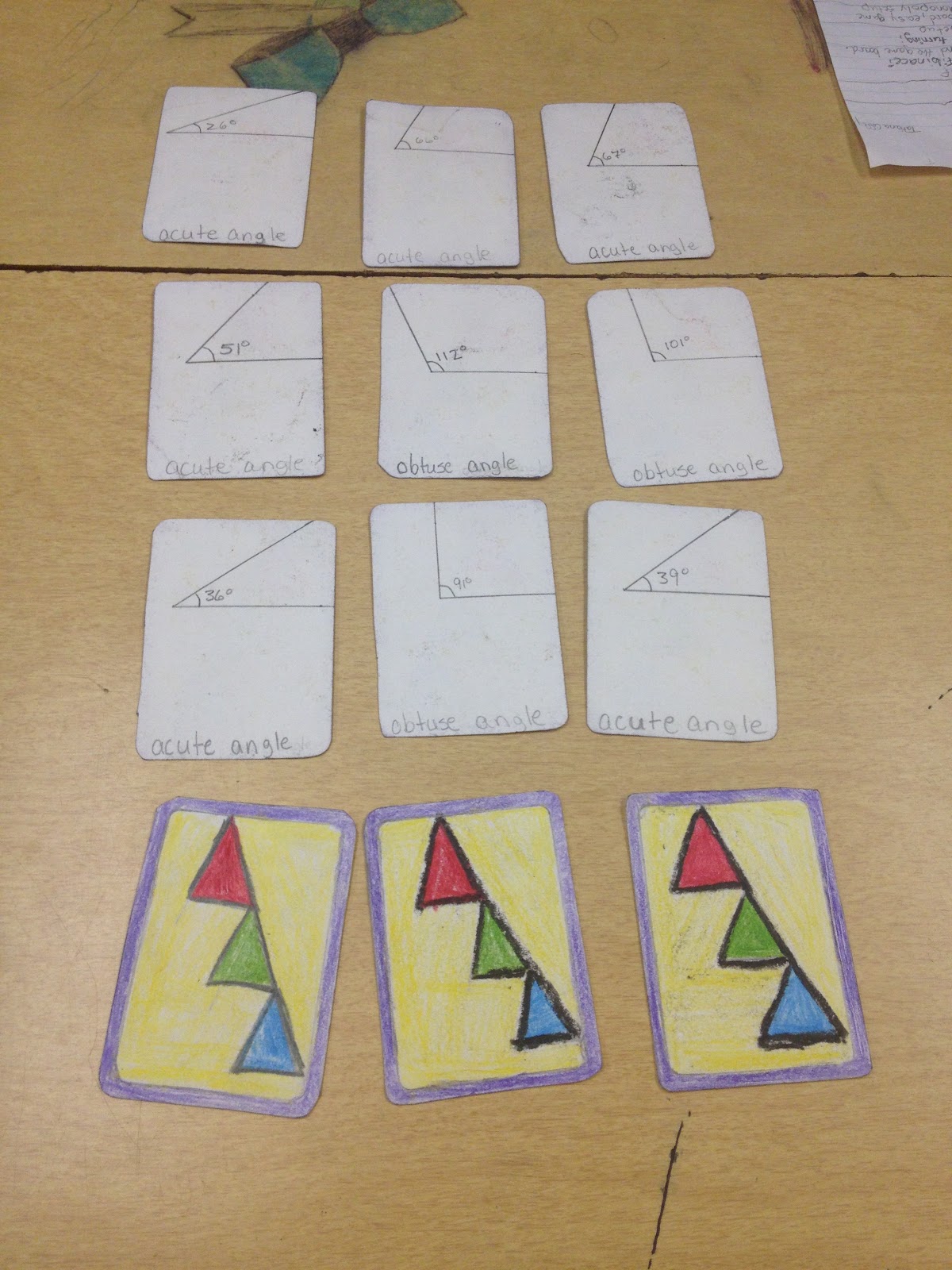 The only card game in the class, this has players racing to determine which set of angles can create a triangle.  Nine cards are placed face-up on the table while the players try to be first to find a working group of three cards.  The angle measures are also drawn on the cards for younger players to be able to visually prove that a triangle exists.  More advanced players can find groups that create quadrilaterals, pentagons, or larger polygons. 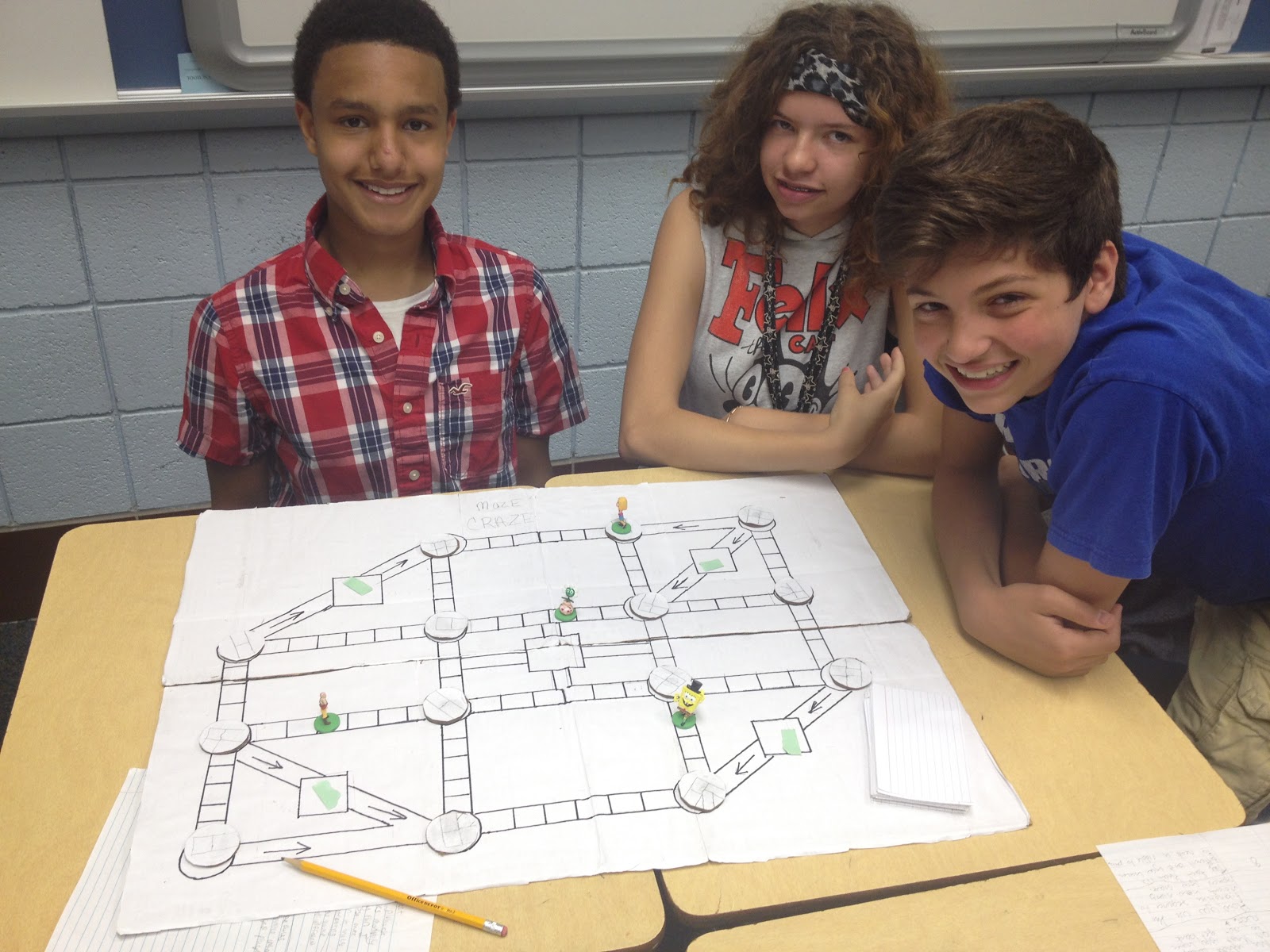 2-4 players are trapped in a temple and are seeking treasure.  They race to find a treasure and return to the main room, all the while sabotaging their opponents by rotating circular rooms to block certain paths, while opening others for themselves. 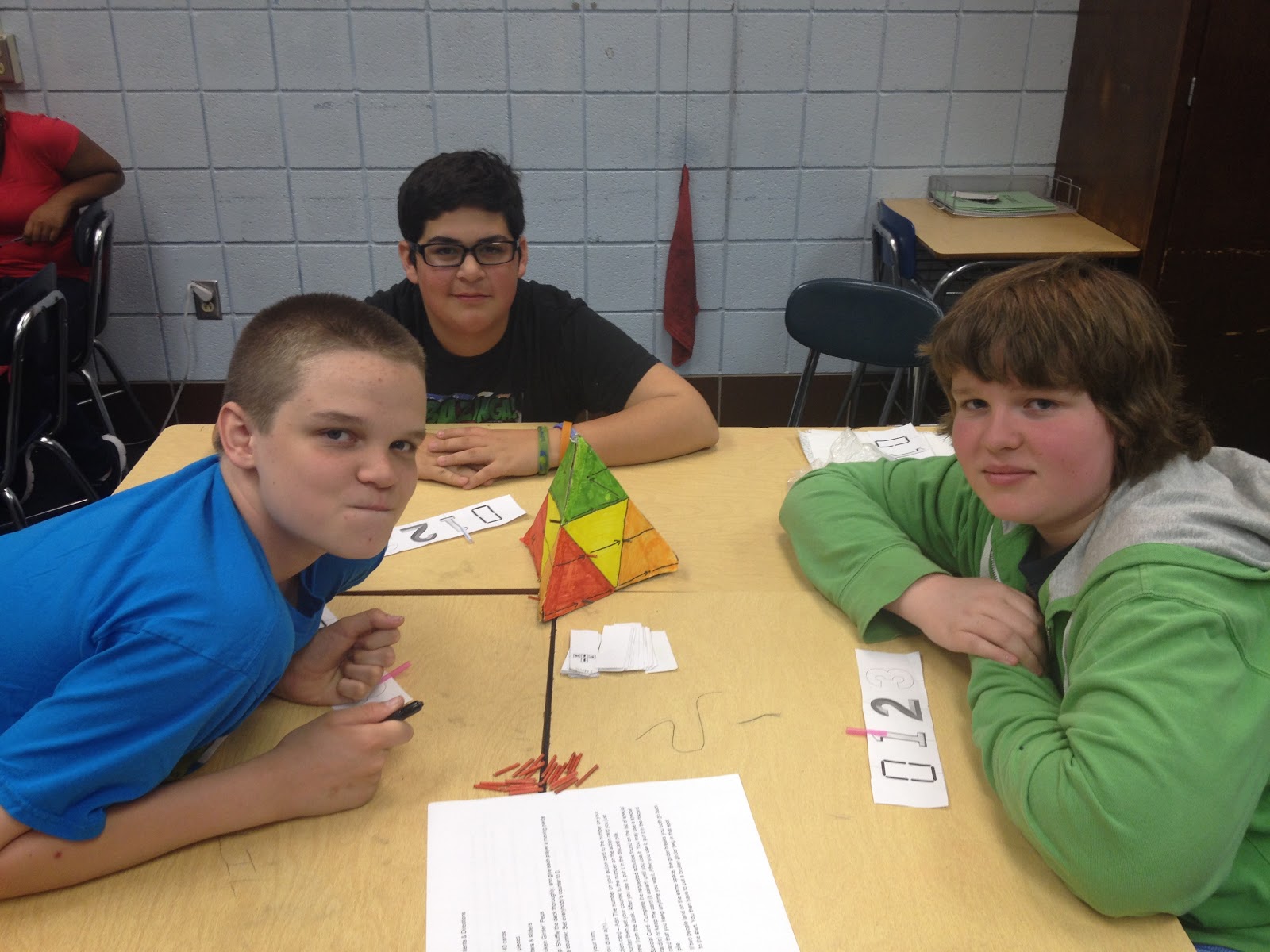 Players race to the top of this three-dimensional board inspired by Sierpinski's Triangle.  Cards require them to sing, dance and yodel while they try to knock each other back down the mountain.

These games are amazing!  The groups worked very hard on all of them and they are entirely the products of my students' minds.  I think this was an incredible project, considering it was the first time I've done anything like it.

The next time, I'll have a more detailed rubric to make sure that feedback is more systematic rather than random.  I'd also like to change the timetable slightly so that there is more time for peer review and feedback.

For the most part, the breakdown of dates and work that we created was excellent.  There was very little downtime for the groups, but adequate time for them to complete the assignment in class.  The groups that used their time wisely, came up with incredible finished products.

As the groups gave presentations, I had the rest of the students rate each game on a scale of 1-10.  At the end, the game with the highest student rating was Operation Corporation, with a 8.75 average, followed closely by Shark Attack at 8.04 and Fibi at 7.93.

Their grades were not determined by the student ratings, but I did think it was interesting that many of the scores surprised me.  I rated several groups higher than their peers and I think this may have been because I was looking at the potential of each game versus what was actually presented.


After they left, I filled out the Student Failure Reports for the 15 students who failed my class for the year.  My district has a board policy where all marking period grades must be raised to a 50% if they are lower.  For students in Special Education, the lowest grade they can receive on a report card is a 59%.  From my understanding, the purpose of this policy is to make sure that if a student has a very bad marking period, it can't ruin their entire year.

Even with this shift of grades, I still have 15 students who could not pass.  A few of these can be attributed to lack of attendance.  A few others to lack of response to interventions.  A few, I honestly have no idea.

I really need to start packing up my room, taking my things home.  It's a daunting task and one for which I may have to borrow my wife's car.

I have too much stuff and I don't know where to put it over the summer...
Email ThisBlogThis!Share to TwitterShare to FacebookShare to Pinterest