Posted by Justin at 4:57 PM
The 8th graders showed up today.

Or at least those 8th graders who weren't assigned to the bus that never arrived...

We sent the 7th graders to homeroom and the 8th graders to the auditorium where they were given the same speech as yesterday and last year about expectations for the school year, reminding them about dress code, acceptable hallway behavior, etc.

I sat in the auditorium feeling nauseated.  I don't know why the start of this year has felt different to me.  Perhaps it's because I was hoping to be in a different place, both mentally and physically, right now.  I sat there, not feeling the excited and rejuvenation of a new school year, but the drag of repetition. 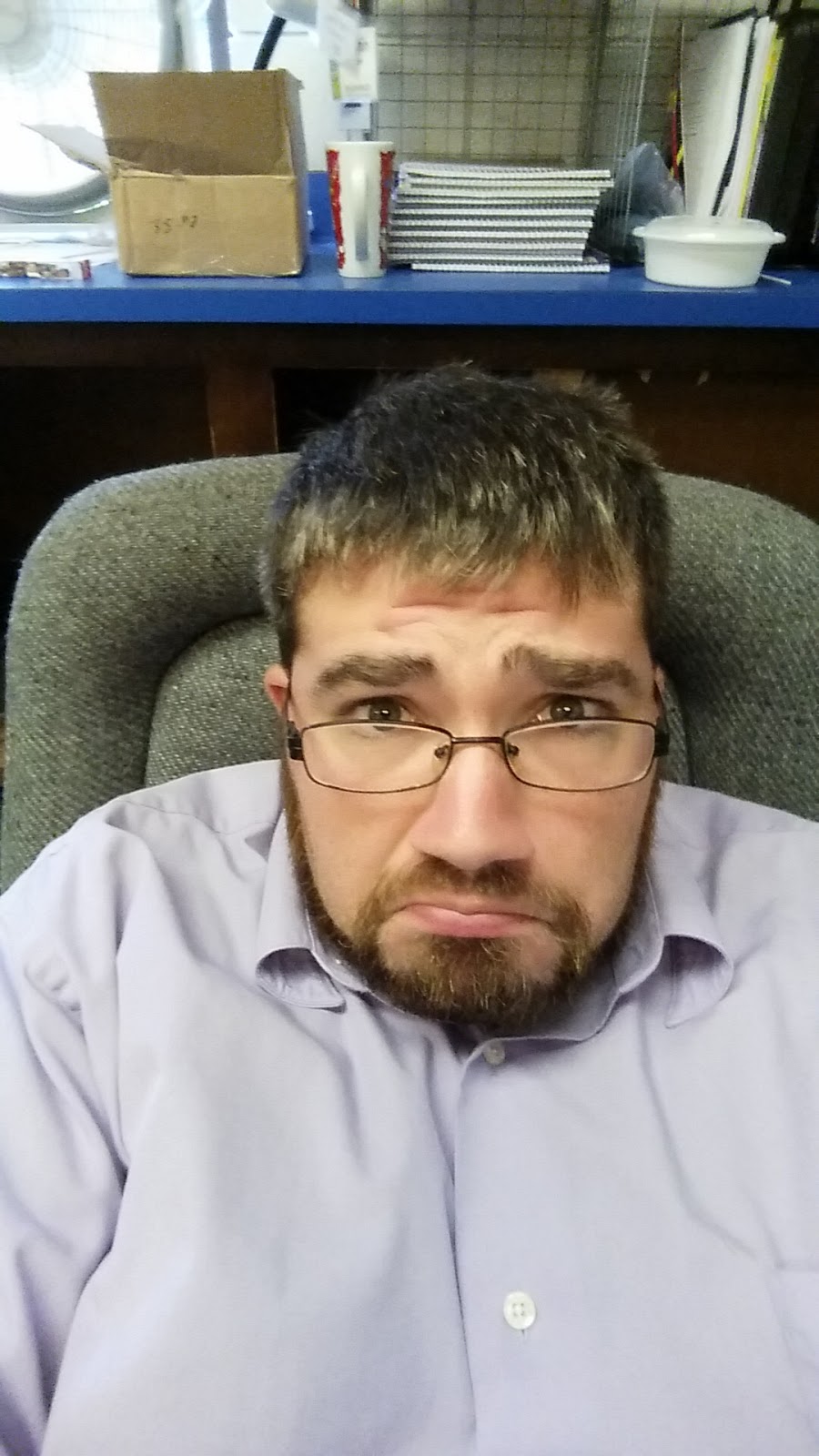 As I watched, a teacher pulled a student out of the main body and sat her to the side (right in front of me) for disruptive behavior.  The girl sat there, complaining and tapping and generally being a 13-year-old who feels that she's been wronged.

When it was time to separate the kids by homeroom, I called my group with a smile on my face, waiting patiently until they were ready.  The young woman who had been pulled aside was in my group.

I had planned to do the marshmallow challenge with them, but the shortened time and first day homeroom clerical stuff cut that out.  Rather than rush it, I decided to do it tomorrow.  Instead, I welcomed them to my class and started talking about the Zome Tools.

I was nervous and started rambling, but the kids seemed very interested.  We talked about geometric prefixes like tri-, oct-, and hex-, as well as the differences between -gon and -hedron.  I made sure to encourage the exploration and participation of the girl who started the day off poorly and by the end of class, she was my buddy. 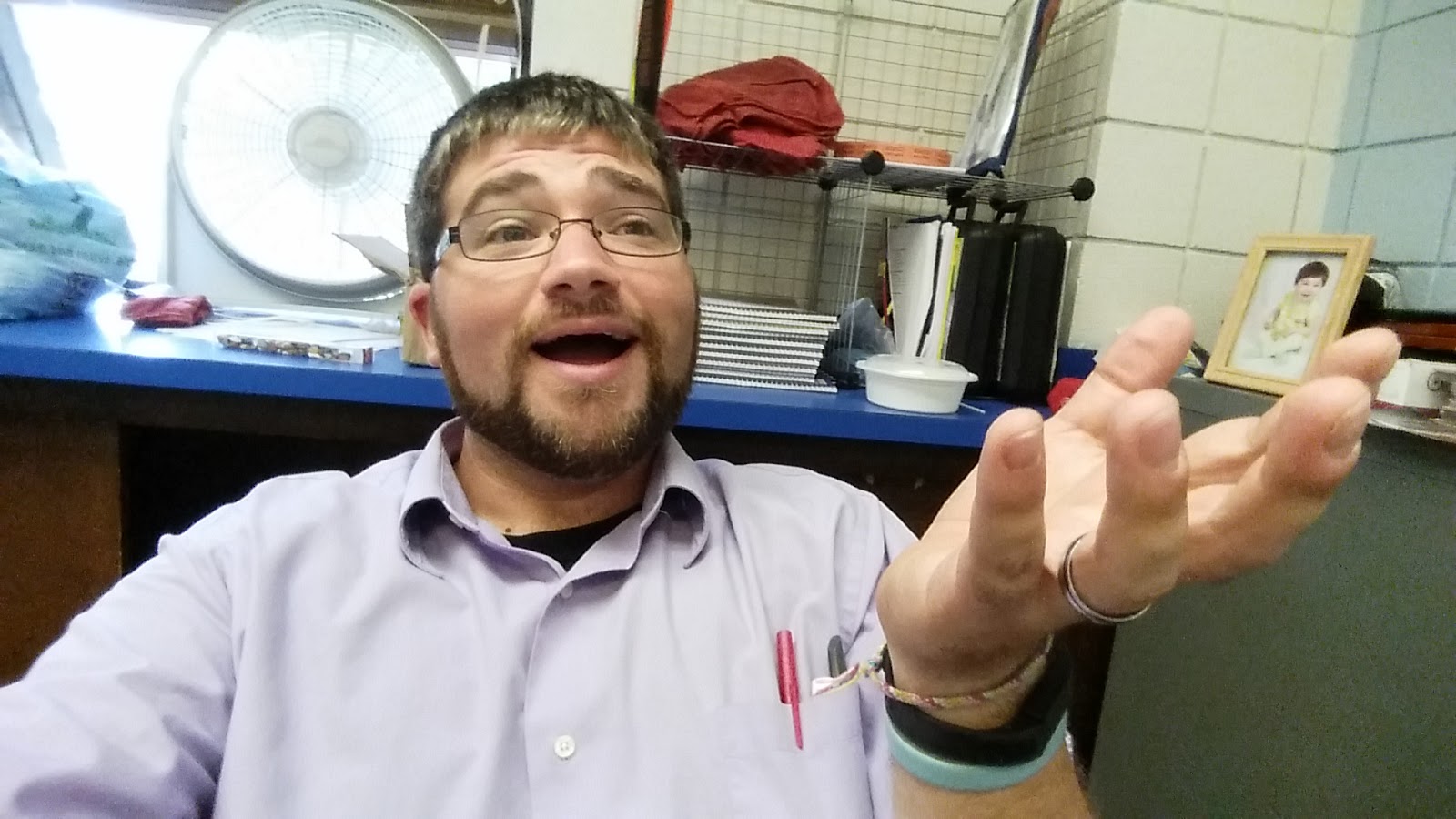 I know that most teachers spent their time going over the syllabus, but I didn't want to do that.  I handed it out so that I could talk about Remind, but that was it.  I channeled my friend Sebastian Speer and told them the following:

There are procedures on this paper, and you can read them, but they all boil down to the only two rules I have.
1) You will do your best to learn.
2) You will not make it harder for other people to learn.

If you are sitting at lunch and someone comes up to eat your cookie, how would you feel?  What if they didn't eat it, but just threw it on the floor because they didn't like cookies?

You would be pretty upset.  Don't eat someone else's cookie and don't throw it on the floor.  It works the same way in here.

The remainder of homeroom was taken up by clerical stuff, getting them into their lockers and figuring out the schedules.

The geometry class went about as I expected.  The students were eager and interested and very high energy.  We had a very long conversation about the hyper-dodecohedron and how it was a 4-dimensional object projected into 3-dimensional space.  We did the first two days of Estimation 180 and talked about number sense.

It's a smaller group than last year and with a VERY different social dynamic.  I look forward to figuring out how to utilize it to get them to push beyond their boundaries.

By the time 8th period rolled around for my second pre-algebra class, it was 86 degrees in my room.  Several of the students already had attitudes from their encounters with teachers earlier in the day and the rest were half asleep.  I need to spend some serious time thinking about my expectations for this class, especially in terms of size, willingness and time of day.  The social make-up scares me quite a bit since there are several students who play off of each other in destructive ways.

With so much going against this group, I know it's going to be a struggle to figure out how to reach them.  They seemed to really be into the Marshmallow Challenge, so (surprise surprise) projects may be the way to their heart.  Now I just need to find a ton of projects. 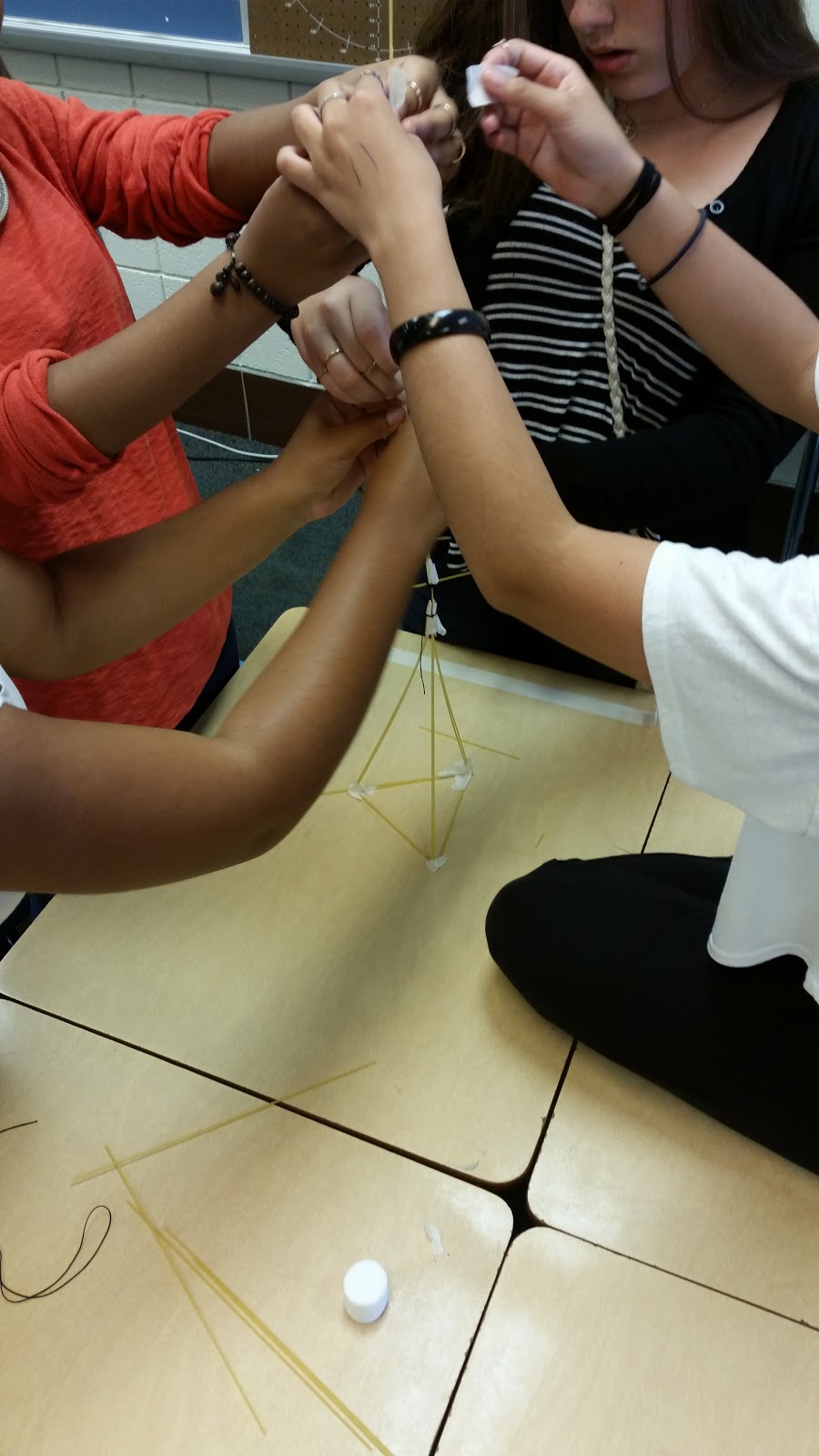 After creating marshmallow towers, I asked the groups to write a few lines reflecting on their work and strategies.  After we discussed it as a class, I gave them thicker noodles, better tape and another marshmallow and had them try again.

My major goal this year is to figure out how to keep that 10% from sabotaging the other 90%. 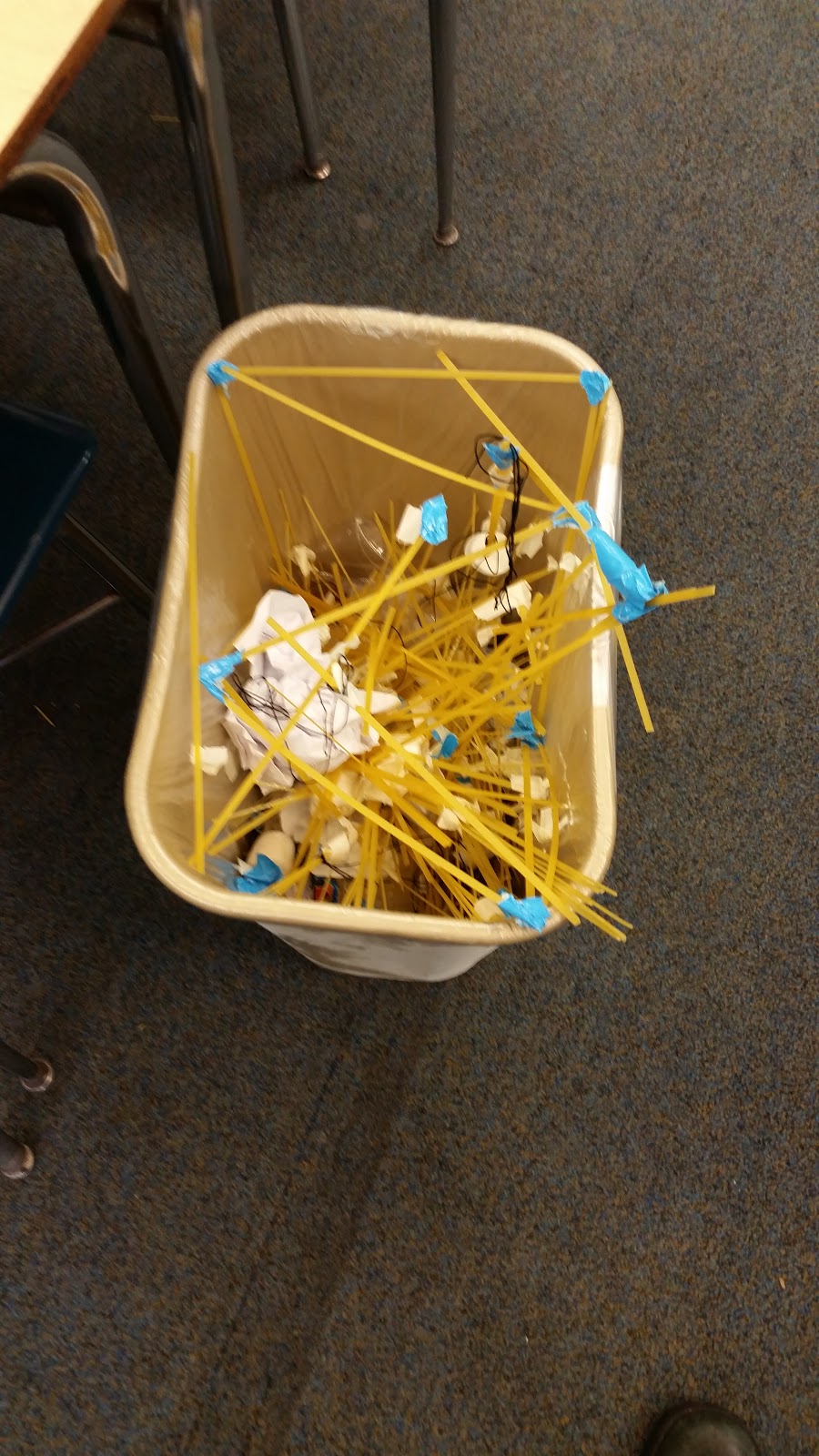 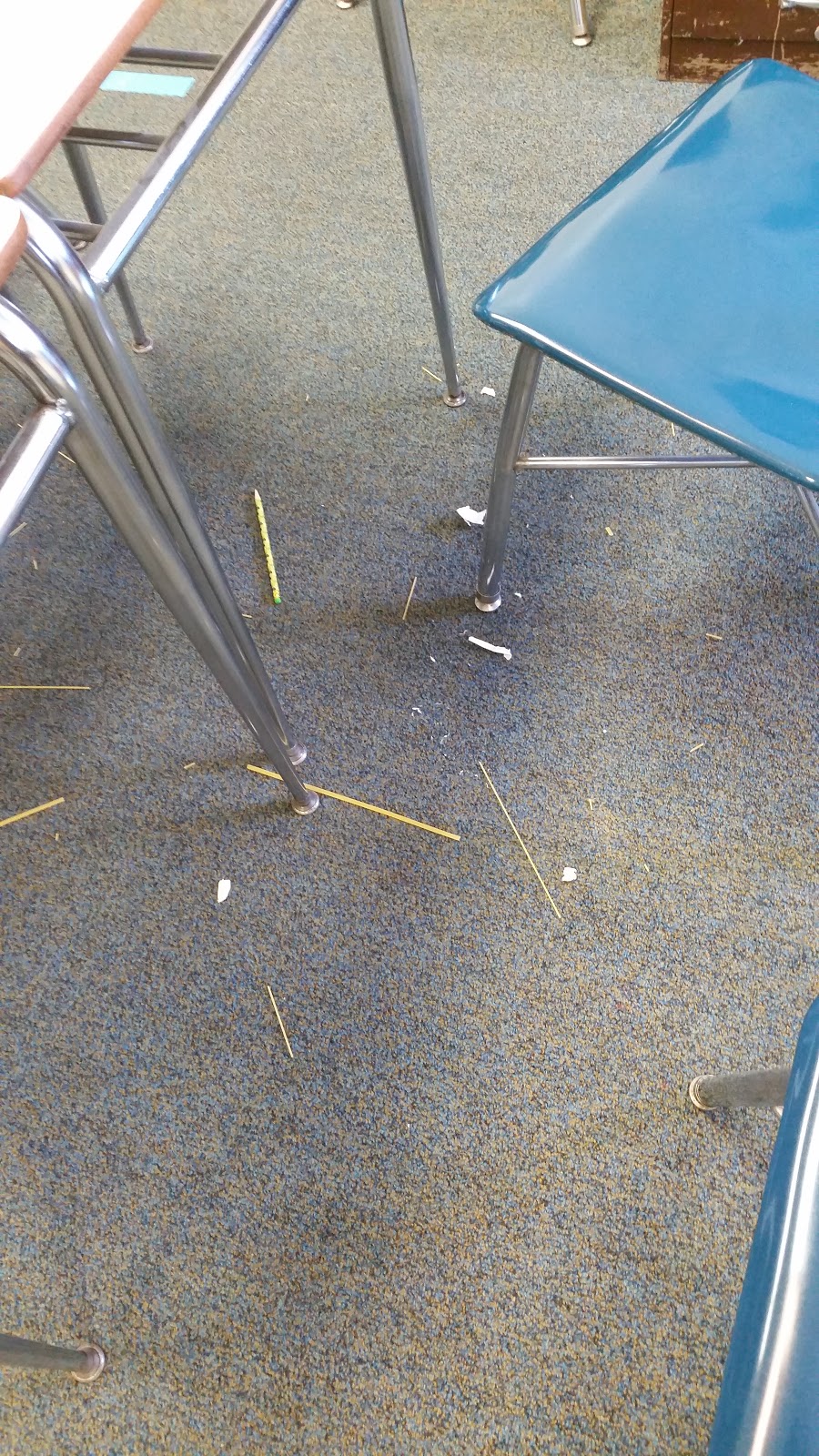 I know that last year I talked about Maslow's Hierarchy of Needs in terms of students productivity.  I don't see how anyone can be expected to learn when the room is 87 degrees.  I also know that the room above mine is closer to 90.

I will, as always, do the best I can do with what I have. 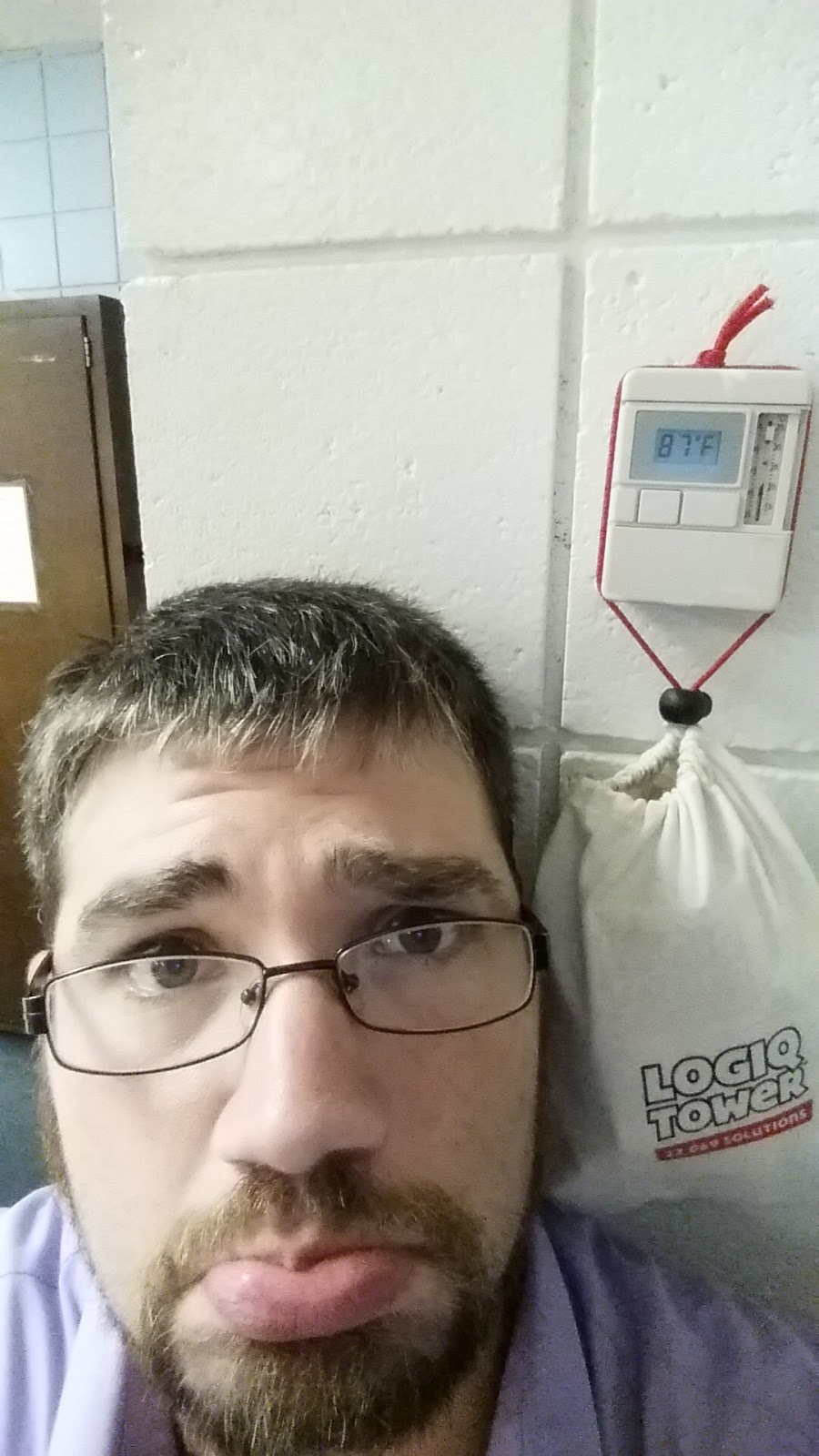