Posted by Justin at 4:12 PM
People were congratulating me on a great first day after yesterday's post, but I went home and felt awful.  I was feeling no energy or inspiration for this work and was very disheartened.  Things went smoothly, but I wasn't excited.  I talked about it with some colleagues from Twitter and with my wife, trying to get my head on straight.

My wife very helpfully reminded me that the start of the year is always rough for me.  I went to bed early last night, then got up to work out this morning, put on a clean shirt and came in to school with the hope of turning it around.

My first class went VERY well.  I introduced them to my friend Mr. Stadel and #Estimation180 and we talked about number sense and why it's helpful.  Then, since they didn't get to do it yesterday, they did the Marshmallow Challenge.

I started them with the basic challenge:

Using 20 pieces of spaghetti, 1 yard of string, 1 yard of tape and 1 marshmallow, build the tallest free-standing structure with the marshmallow at the top.

There was a ton of good work coming out of all of the groups, although a casual glance would not have seen that.  A casual glance would have seen kids goofing around and talking about shoes and singing songs.  But under that shell, there were good discussions about stability and utilization of resources.

After 18 minutes, we found that only 2 teams had been able to construct towers and I had them write about their strategies.  I put stickers in their notebooks when they were done and we talked about it as a group.

I won't spoil it by saying which group won, but there were MANY more viable towers the second time around.

This is a chatty group, but very nice and I'm looking forward to getting to know them.  I have almost all of their names memorized already. 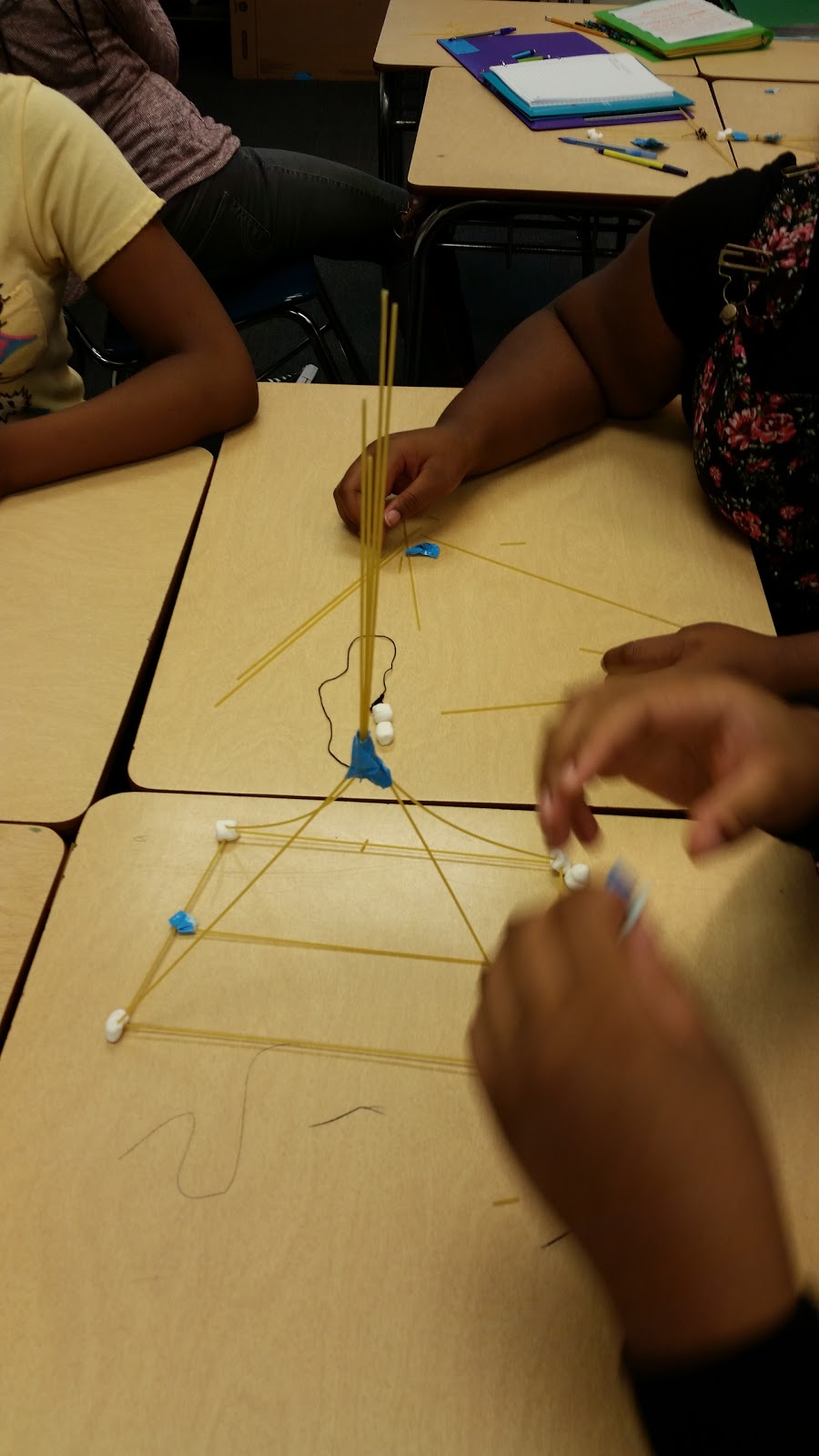 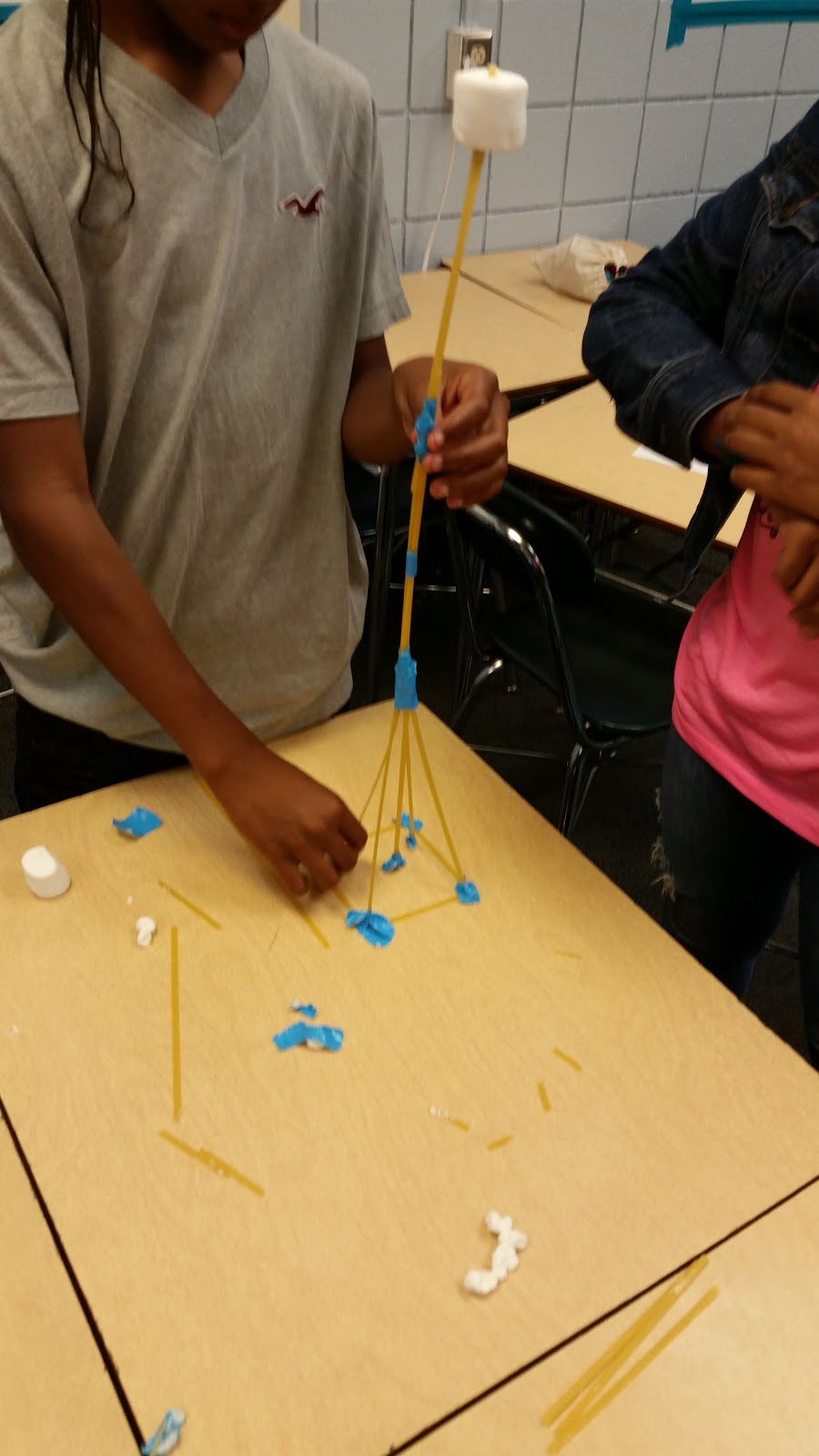 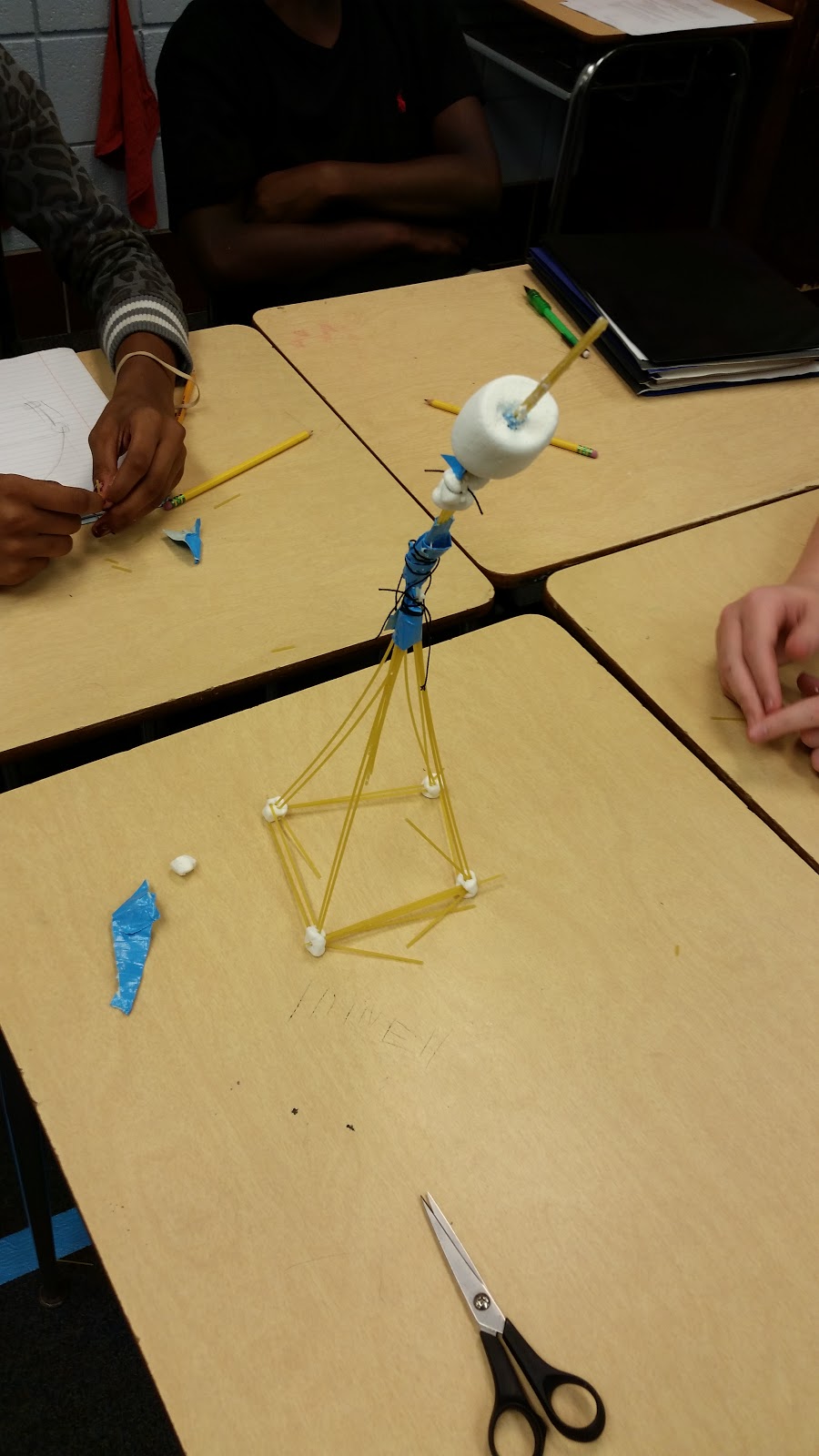 In geometry and the second class of pre-algebra, we worked on Fawn's Noah's Ark activity.  I started it the way I do with many of my activities: with a story.

I told them how I had made the mistake of watching Noah this summer and what a terrible movie it was.  This lead to a basic explanation of dry docks and why boats dip down into the water rather than being large rafts, like the ark in the movie was. We talked about the importance of the center of balance in a boat and how not to drown the animals. The geometry kids worked insanely hard for over an hour.  The discussions were excellent and heated.  The groups were eager to get the right answer and got frustrated with my replies. 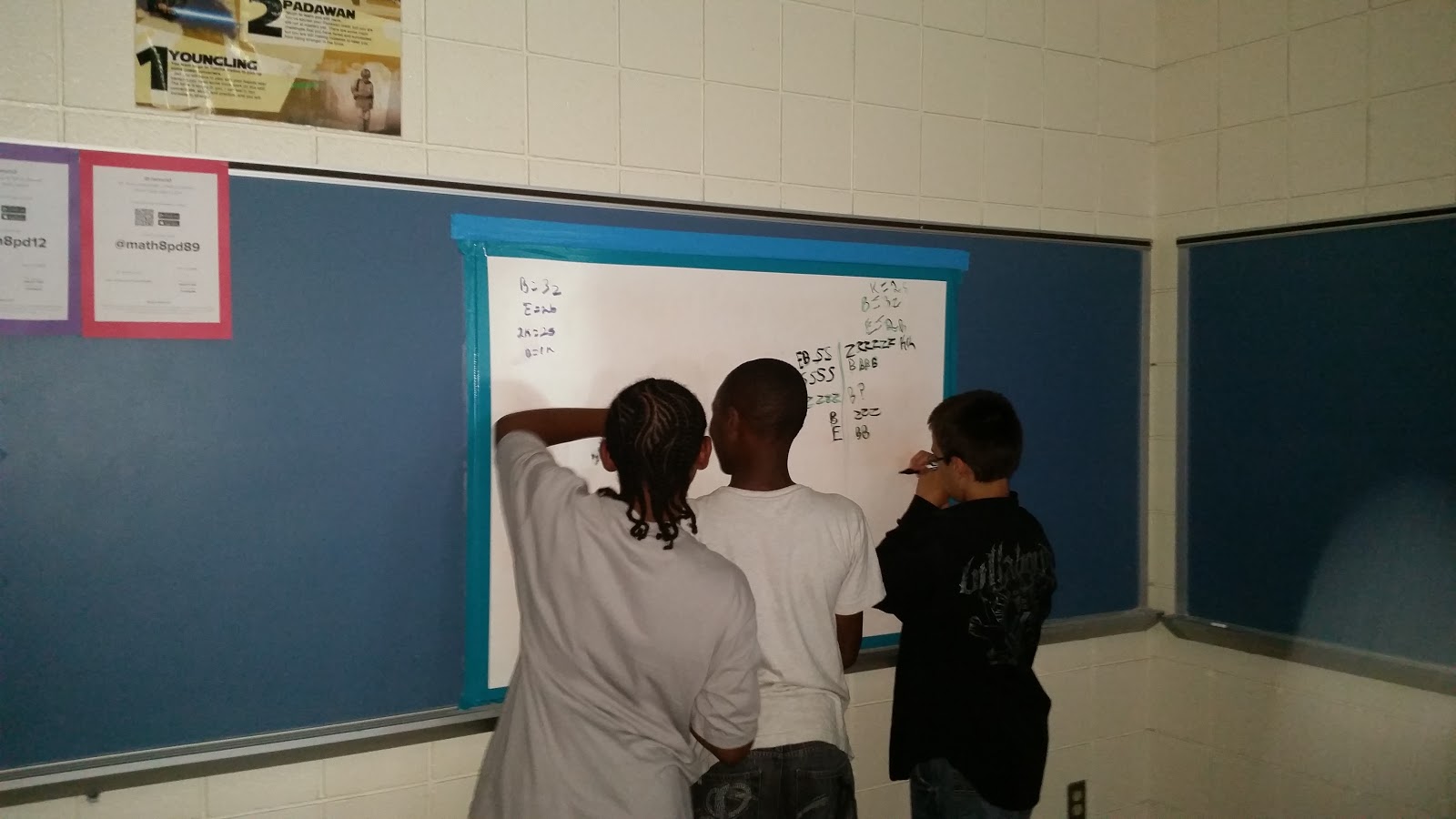 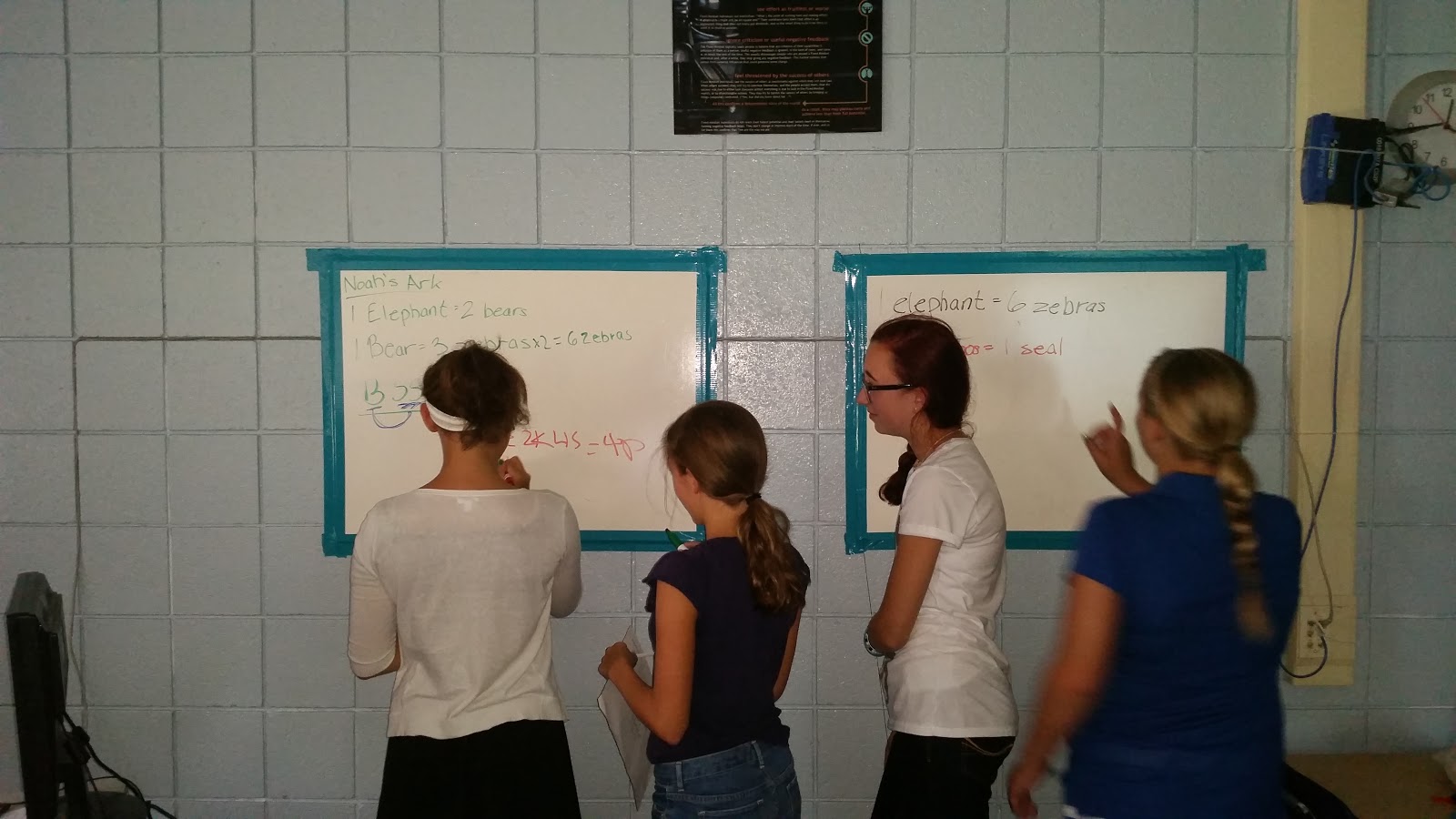 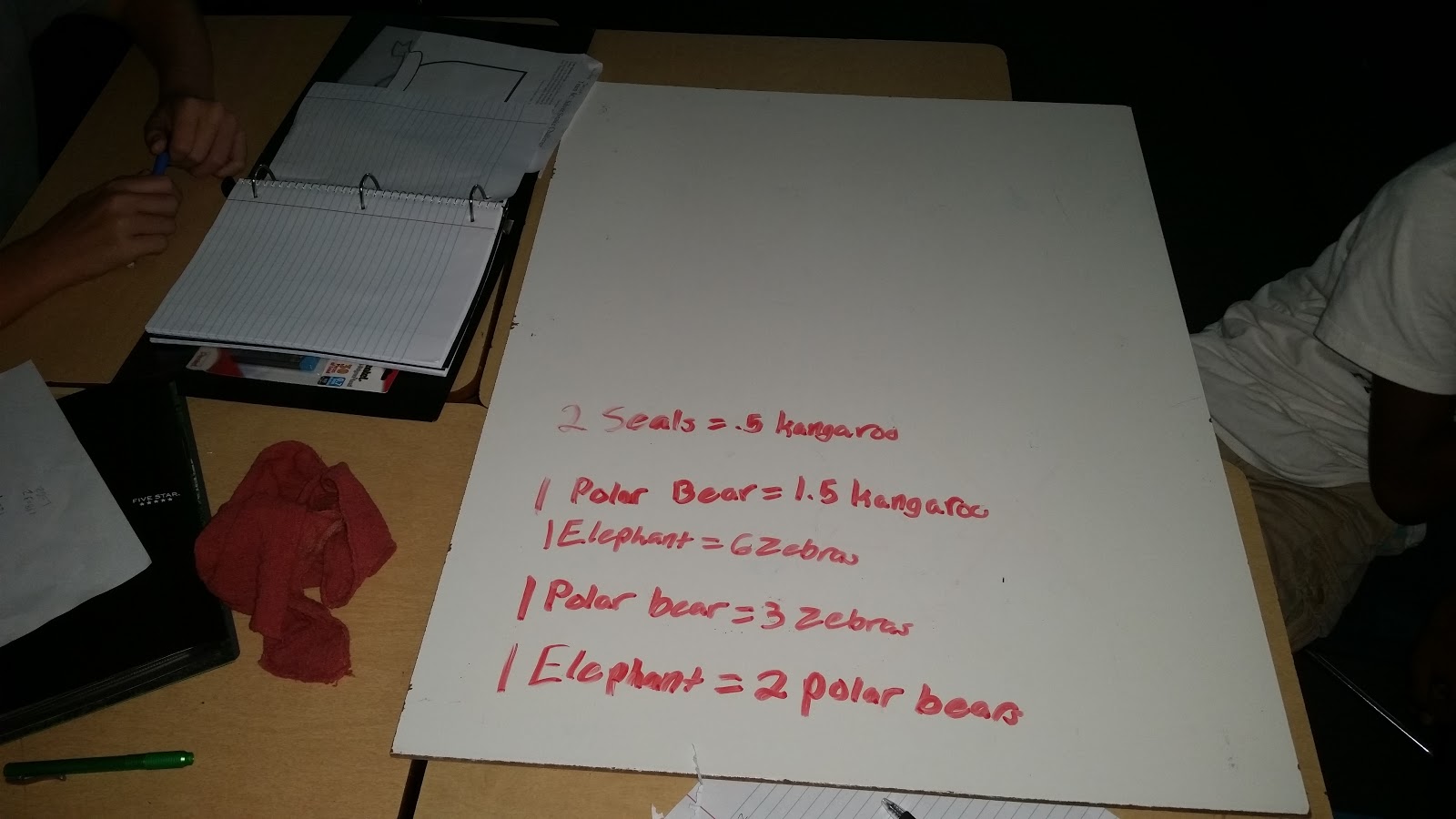 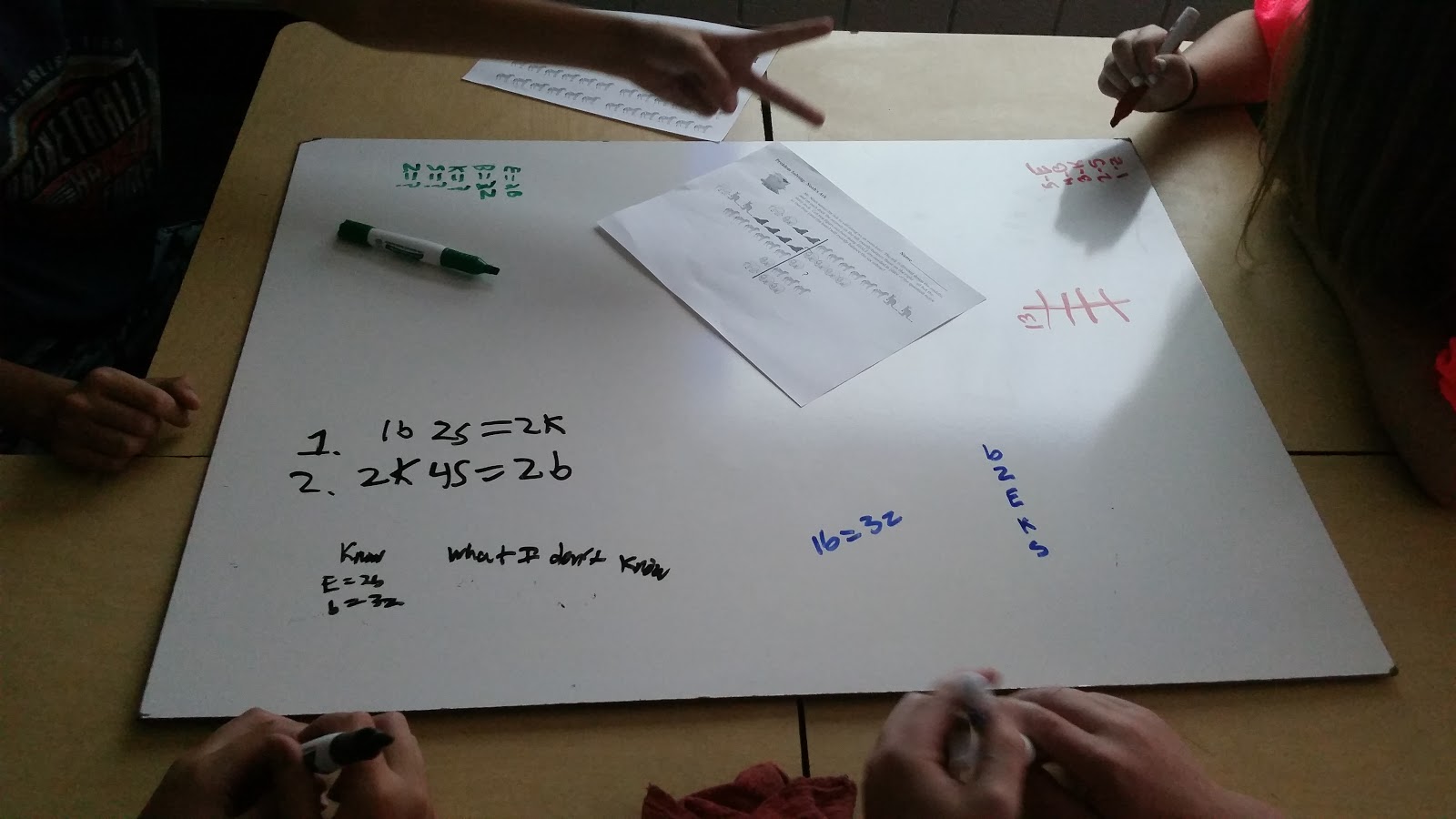 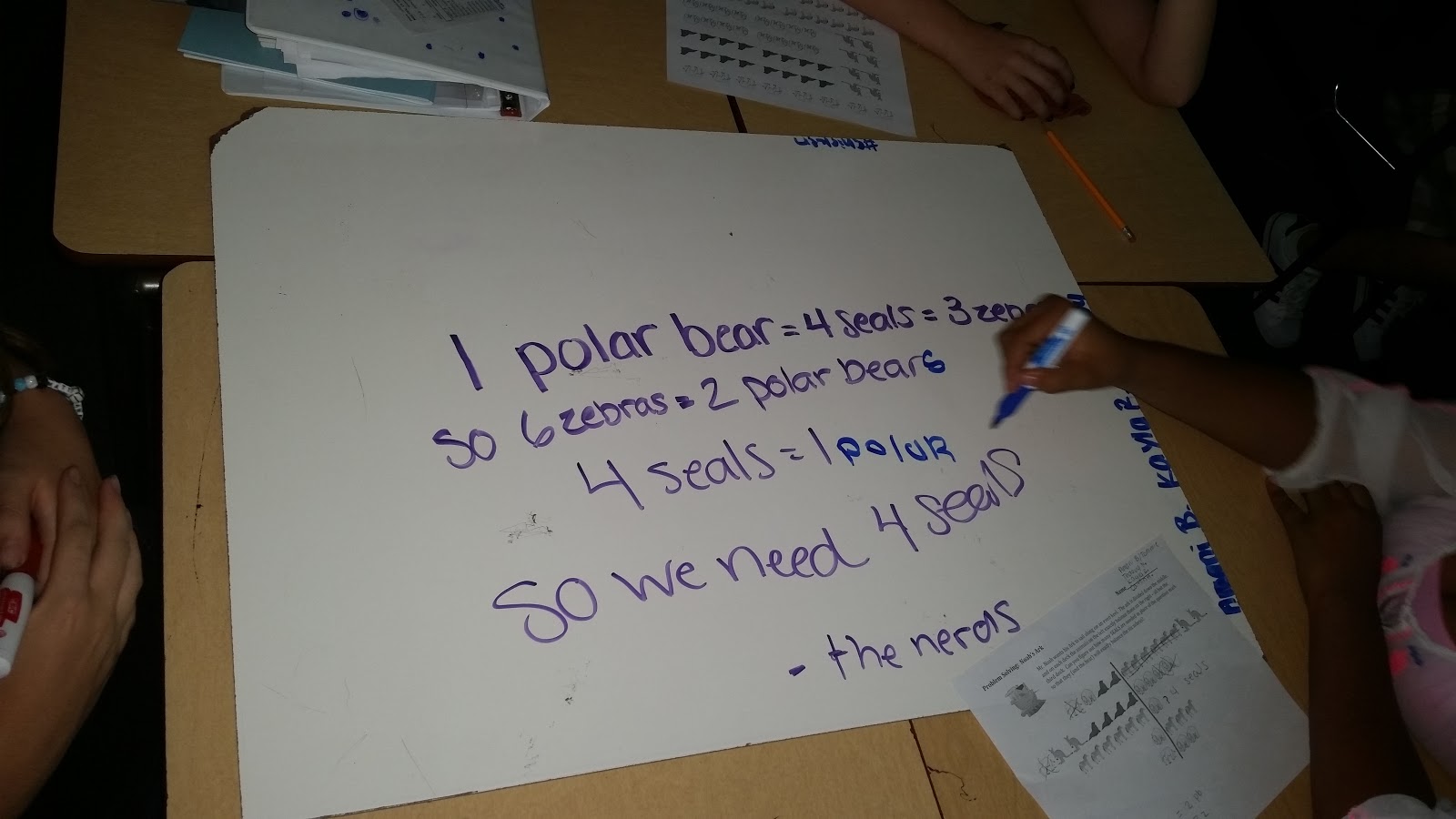 When the period ended, there had yet to be a satisfactory explanation.  Tomorrow, we will talk about the importance of the struggle versus the answer.  I am working on being less helpful.  This is a huge task for me since I love to show off my abilities.


The pre-algebra kids slid in and out of productivity on this task.  A few of the groups spaced out and refused to work, but got back into it with a bit of encouragement.  By the time they got to my room, it was 87 degrees again, so I was much more lenient with my on-task requirements.  As I sort of expected, they, as a group, were much more willing to give their explanations verbally than writing them down.  I will ease them into writing about math, but we will be doing it.  Lots of it.

When I sensed that they were about done, we discussed the problem as a class and I gave them some time to sit and chill (as much as they could in 87 degree heat).  I think I'm going to be much less strict about going bell-to-bell this year.  Down time will need to happen.


Overall, today was a much better day than yesterday.  I'm going to go home and enjoy that.