Posted by Justin at 4:07 PM
Add another entry to the Book of  Regrettable Sentences:

"I don't care how quickly you solve the problem as long as you understand what's going on and can explain it."


So much of my educational career has been spent swinging back and forth between sides of pedagogical theory that you'd think I would be used to it by now.

"Homework in vital in mathematics because it provides necessary practice" became "homework is awful because the kids don't do it and it only furthers their dislike of mathematics" before moving towards "homework should be limited to extensions of class material" and currently residing somewhere around "I don't usually assign homework because it doesn't fit into my grading scheme."

I think there is something valuable about speed in mathematics.  Being able to do calculations quickly provides a certain level of confidence in students, especially those who have trouble distinguishing between mathematics and calculation.  All too often, speed is equated to ease.  I think the reality is that speed is much more correlated with familiarity, which breeds comfort.  I want my students to be comfortable with the mathematics that we're doing in class.

Growing up, my mother frequently told me that if I had spent half as much effort working on something as I did trying to get out of it, I would be able to accomplish great things.  I didn't fully believe this until I became a teacher and had children of my own.

"Dad, I'm tired of cleaning!"
"If you would take more than one toy at a time, you would have been done by now and on to something else."

Today's class was a practice day.  There were 7 single-step inequalities for students to solve and graph and I let them use the whiteboards.

I was stunned by the amount of time that they spent copying the problem, erasing, recopying, changing marker colors, erasing again, perfecting the spacing of their number lines, modifying the arrows on the ends and recopying the problem, all before they even began to work on the task.

This was consistent throughout the classes, with very few exceptions.

I was concerned that this stemmed from lack of understanding about the problem, so I pulled the class back together, and had a student tell me what to write.  I offered no insights and only asked clarifying questions.  The student did an excellent job on the problem and the class followed it well and was able to explain what she was doing.

When I sent them back to the boards, however, they once again drifted off into the nether.  They know how to do the work and, when they focus, they do it well.

So here's the problem:

Letting them work at their own pace isn't working.  Their testudinal movement has the effect making them think that the problems and tasks are MUCH more complicated than they are.

"That one problem took us 5 minutes to do and we're supposed to do 10 of them! I'll never get done. I might as well not try."

When I set time limits, I frequently get students who don't even glance at the task, but instead wait patiently for someone else to do it.  Again, I see this not as lack of understanding, but lack of confidence.

"It's going to take me longer to get started than he's giving us to work on it."


A few years ago, I worked with a teacher who used 3rd and 4th grade speed math sheets as his warm-ups in 9th grade.  Students came into class, left them face down on their desks until he said go.  They then had to complete the page as quickly as possible.

I worried about this at the time, being concerned that kids who finished last would think they couldn't do it.  Now, I'm thinking that having these be low level problems, such as single digit multiplication, addition or subtraction, may help students practice fluency.

It's something I'll have to mull over. 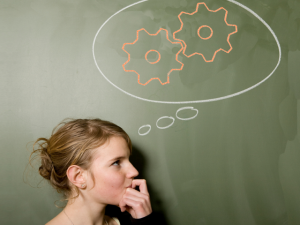