A few weeks ago, a company began marketing an app called PhotoMath. The claim was that taking a picture of a math problem will produce not only the answer, but the steps to get there. Mixed reviews have since come out about this app. Some state that it works best with a stationary camera.  Others talk about how when it scans something like "4.  3x+2=8" it will look at the problem as "4.3x+2=8."  The majority of the reviews agree that this is very close, but not quite a finished product.  I predict that in the next year, it will be.

When I wrote about cell phone use in my class, the statement that seemed to resonate with other educators was "If you are asking questions that can be Googled, you're asking the wrong questions."

PhotoMath is a perfect example of this statement.  As technology improves, the ability to do mental calculation will become less necessary.  As teachers, we need to recognize this and teach our students accordingly.  Researchers and statisticians have understood this for a long time.  Data can be put into a spreadsheet and crunched however you want.

The skills that we SHOULD be focusing on are interpretation and analysis.  Yes, Excel can find you the standard deviation of a data set, but it can't tell you what it means in the context of the exercise.  Yes, PhotoMath (once perfected) will be able to solve for X (or more) in equations, but it won't be able to interpret that value.

I preach this doctrine, but I'll admit that I don't follow it nearly enough.  It's hard work to get kids to interpret problems, especially when they have very rarely been asked to do so before.

I would like to do it more often, but for reasons of energy, creativity or (more likely) laziness, I don't.

The incredible Jami Packer came to observe my classes today!  I couldn't let her drive all the way up here just to watch my kids do worksheets.  In light of a successful activity that I did a few weeks ago in conjunction with my ultimate goals for my students, I decided to do another gallery walk.

This time, instead of basic calculation, I gave each group five word problems.  They were on a variety of applications and all five required different skills to complete.  They were allowed to work alone or in the group with which they were sitting.  They could work on the problems in whatever order they wanted.

With very few exceptions, they worked incredibly well for the entire class!  Almost no one got through all 5 problems, but what they did do was quite good and I was very proud of them.

During 8th period, a girl realized that she needed to subtract unlike fractions for the problem and couldn't remember how.

Instead of shutting down and giving up, or sitting there whining about how she needed help, she looked up a tutorial on YouTube.  She used her phone as a **gasp** LEARNING TOOL!!!
8th period worked very well on this task too.  An interesting side effect of doing it twice was that several kids used the problems taped up in 1st period as guides for their own work.  I didn't see anyone copying, but I did see several kids using strategies that were already posted.  My plan for next week is to use the posted work to talk about common errors and misconceptions. 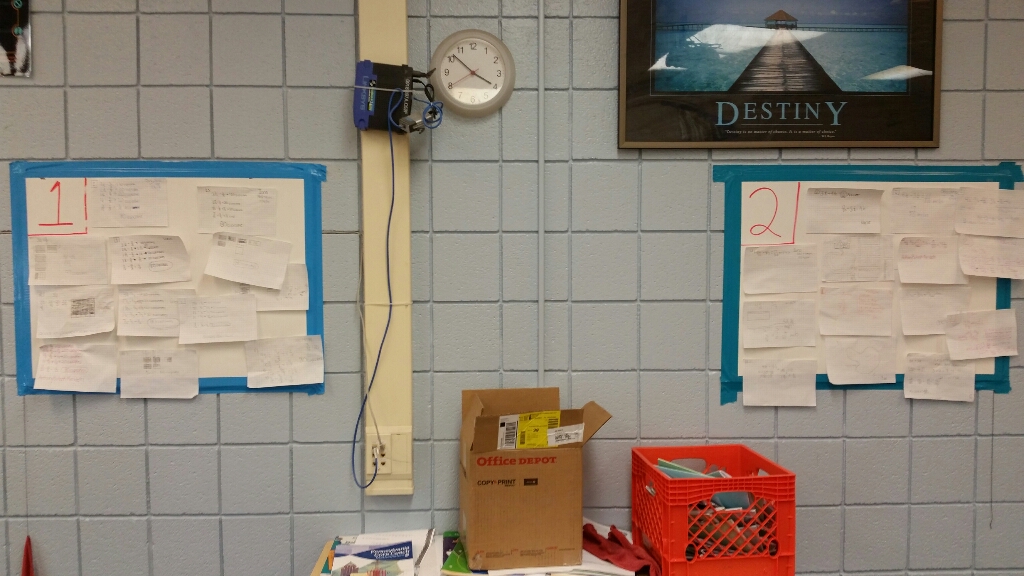 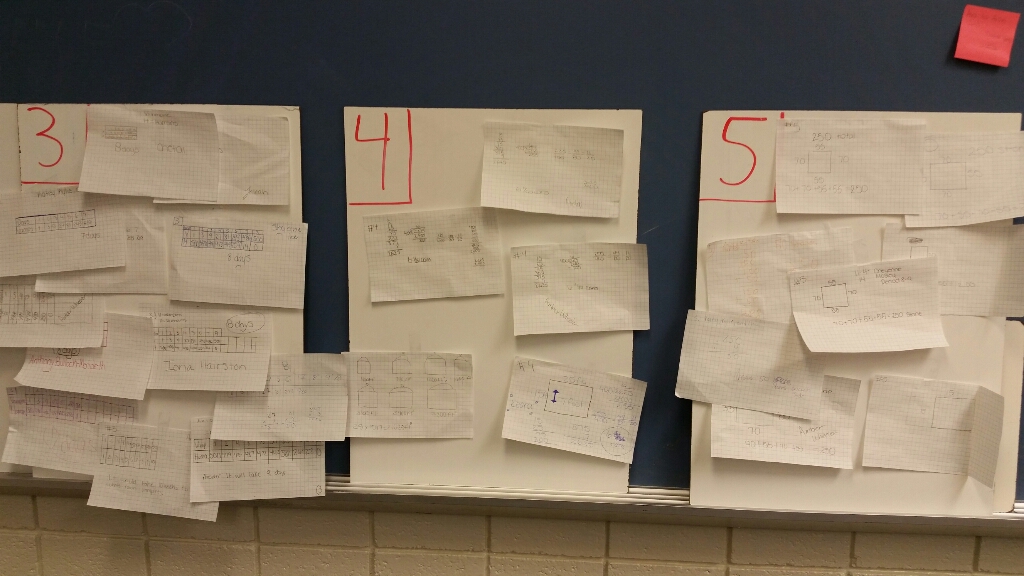