This was a tough week for multiple reasons, but I think it ended well.  My Astronomy students, the ones who had not completed some sort of alternative assessment, took the chapter test.  As I sadly expected, they did not do very well, but the nature of the science contract means that the test was worth, at most, 30% of their chapter grade.

A large portion of my students emailed assignments in late last night or early this morning.  Another large group handed in physical copies.  Overall, the classes together averaged about 50% for the chapter, which, considering where I was 3 days ago, isn't all that bad.  On top of this, I have at least 4 students who earned over 100%.

In addition, some of the work that I received was pretty great. 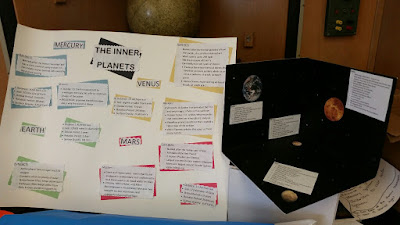 Also, I received an invitation from our curriculum director today asking me to be on the planning committee for an EdCamp during the district inservice next month.  I am incredibly excited about it!

This week ended well.
Email ThisBlogThis!Share to TwitterShare to FacebookShare to Pinterest