Posted by Justin at 3:04 PM
I'm making some changes during this marking period.  The first is that I will accept late work only 1 day late.  I will evaluate extenuating circumstances on a case-by-case basis.

The other major change is that the discussion questions which we have been doing weekly will be closed at midnight on the day they are due.  This past marking period I have allowed students to go back and answer the questions late, but I'm stopping this for two reasons.

First, the discussions are open for 7 days.  I post them on Sunday and will close them on the following Sunday.  Students have a week to answer the question and respond to their classmates.  The process takes literally 5 minutes.  I think it's important that I hold them to finding 5 minutes over the course of a week to have a meaningful and academic interaction with their classmates.

Second, the purpose of that assignment is to foster that academic interaction.  In order for that to happen in a meaningful way, there needs to be a timeliness to it.

In addition, I was deeply annoyed at receiving emails to review 250+ discussion board postings in the past 3 days from students who hadn't done it before.


These deadline enforcement choices were made after much internal and external debate.  I want my grade book to be open for students who are having difficulty grasping the concepts, allowing more time to master the material.  Unfortunately, over the past 90 days, I can't think of a single time when that was used as I intended.  The students who were having genuine difficulty came to speak to me and we worked through the issues.  Students who missed school due to extended illness did the same.

The students who were waiting until the end of the marking period to turn in assignments weren't doing so in an effort to perfect the highest quality work.

In short, they were using my flexible deadlines out of something other than necessity.

I consider the flexible deadlines to be a sociological experiment in educational practice.  It did not have the intended or desired results and so I am choosing to discontinue the experiment.

I expect that grades will take a hit, but hopefully that will have an effect on the attention to detail that my experiment did not.

Either way, I won't be spending hours at the end of the marking periods grading assignments that were thrown together the night before. 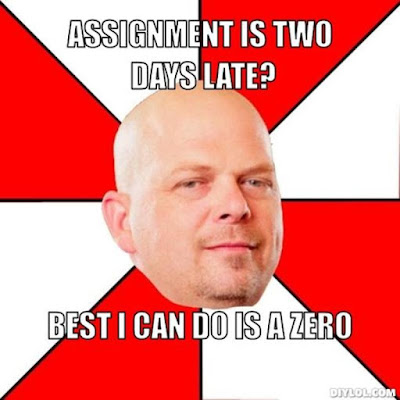