Posted by Justin at 9:50 PM
I've been thinking about prisons recently.

We, as a society, have decided that when someone breaks the law, it is necessary to house that person away from the rest of the population.  However, reasonable people often disagree about the purpose of prison.

Penitentiaries were designed to be the adult equivalent of "go to your room and think about what you've done" and comes from the same root as penitent, meaning one who repents for their wrong-doings.

By removing the offending person from society, modern prisons serve two purposes: to give the offender time to think about their crimes, and to protect the rest of society by removing the offender.  There are arguments to be made about the effectiveness of our current prison system to accomplish either of these goals, but that's not what has been in my mind.

I've been thinking about the responsibilities of prisoners.

Prisoners are compelled to be in prison.  If they refuse to go, they are forcibly taken.  Once there, they need to follow certain rules for the duration of their sentence.  Should they break those rules, there are various penalties, including placement in a more restricting environment or even an extension of the sentence.  If they follow those rules for many years, then just maybe their sentence will be shortened.

Once they are released, many have difficulty finding jobs as a direct result of having a criminal record.  Of those released, more than half are rearrested within a year, with the 3-year and 5-year rates of recidivism being 68% and 77% respectively.

Is it the responsibility of the prison to rehabilitate these people, or simply to remove them from society for a designated period of time?

What are the responsibilities of the prisoners in this system?


What about students?  What is the responsibility of the students in school?  We tell them that they are part of a community, but very often don't give them a meaningful voice for change.  Much of that lack of voice is due to state or federal regulations about what must happen in a school and by no means the fault of local districts.

But how often are students involved in discussions about graduation requirements or district policy?

Students are compelled by law to attend school.  For most, this means the district in which they live.  Yes, their parents get a say in policy by voting for or against members of the school board, but this seems like a remarkably small voice considering that students will spend up to 17,550 hours in school.

This is 2 full years of their lives.

There are, of course, those who can shorten this time period by excelling academically or, more likely, take extra classes during the year or over the summer, essentially trading childhood for early graduation.

For most students, this is not a possibility and schools are not designed for it to be.

There is, however, a much easier way to shorten the time that a student spends in school: break the rules.  According the United States Department of Education, 130,000 students are expelled from school each year.


The benefits to taking advantage of educational opportunities are often abstract and far in the future.  We tell students that if they work hard now, they will be able to work hard in college and then get a job.  Schools have elective courses to give students a modicum of choice when it comes to what they study, but many districts don't offer meaningful choices until junior or senior year.  Those choices are often usurped by schedule conflicts because of classes that need to be repeated.

Early choices and consequences have tremendous ripple effects that students can't begin to understand at the time when they are made.

What appear to be simple steps to outside observers can become insurmountable.


Even for students who stay on track with grade-level expectations, school can often feel like something to get through rather than something from which to benefit.

The education system is not the prison system, but to many students, it can feel that way.  I won't argue whether this is a valid analogy or not because I don't think it matters.

If students feel like prisoners, then that's what they are. 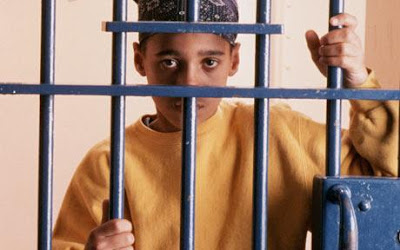 In the compulsory educational system, what are the responsibilities of the student?  If they don't fulfill those responsibilities, (or if we don't convince them that they should) who suffers besides them?

It seem to me as though it is the responsibility of the student to do well for the betterment of themselves on the small scale, but for society on the large scale.

Young Adult Fiction is chock full of stories of teenagers whose lives are determined by their choices on a single day.

"Work hard for the betterment of society" is an upsetting message to be foisting onto children.
Email ThisBlogThis!Share to TwitterShare to FacebookShare to Pinterest