Posted by Justin at 3:39 PM
My original plan for Astronomy today was to do the telescope lab where the students use 2 lenses and a meter stick to build a telescope.  It's an exercise in focal length and following directions.  I decided instead to save that for tomorrow.  Today we did an introduction to focal lengths and magnifications.

With very few of those kids, am I able to grab their attention just with the things I say.  To get them interested in focal length, I walked around the room with a few different lenses and focused the light from outside into an inverted image on a book. 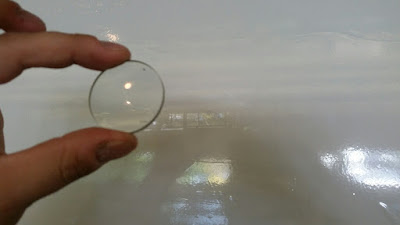 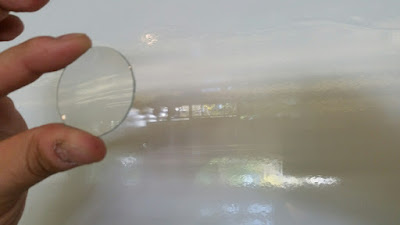 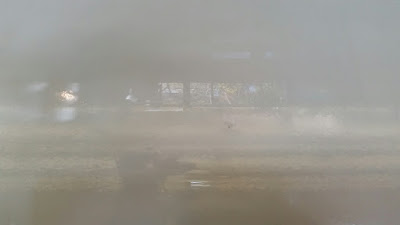 They were suitably impressed, as was indicated by cries of "hey yo! That's so hard!"

They worked (to varying degrees) practicing calculating magnification and answering questions about the best telescopes and eyepieces for magnification, increasing brightness, or clarity.

While they worked, I finished my gravity table! 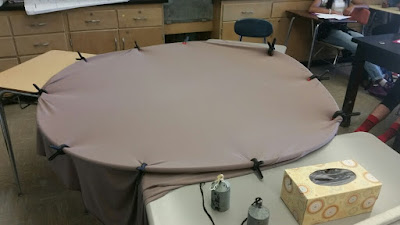 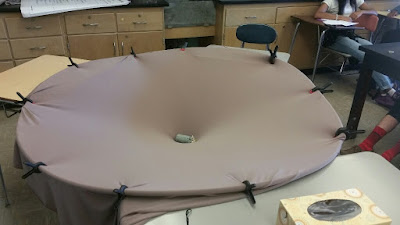 Every class that came in was fascinated by it and I got to talk about black holes and gravity!

The Physics kids spent the double period working on the Slow Drop Lab.  They were given a basic design for a paper helicopter and had to modify it to slow its fall as much as possible.  In watching and interacting with them, I noticed two very important things.

1) They are amazingly creative.  The ways that they developed to modify their helicopters were quite ingenious.  Some of the students added weight, some changed the length of the wings, some added flaps and one group built a parachute.  I loved/hated it so much that I put it on the board.

2) They need a little bit of work on identifying variables.  Several groups had great ideas but since this was supposed to be an experimental design activity, they had difficulty figuring out what their independent variables would be.  With some, the different wing size was that variable, but when you're talking about changing wing size AND adding weight AND cutting the bottom at a different angle, it muddles up control variables and makes it very hard to analyze.

Even in Honors Physics, there is a quite a large ability gap between the students.  Several have expressed a desire to drop the course because they already feel lost, while several are bored with the pace at which we are moving.  I am doing what I can to increase the rigor for the latter students while providing support for the former.

Unlike the students in astronomy, when these kids fall behind it's not from lack of effort.  Either way, I'm trying to support and encourage everyone.

My wife says that this is the happiest that she has ever seen me at the beginning of the year.  I think that's a good sign.
Email ThisBlogThis!Share to TwitterShare to FacebookShare to Pinterest