Posted by Justin at 3:12 PM
In all of the previous classes that I have taught, I have run into the problem of my tangents.  In order to hook the students, and in truth, to keep myself interested, I have a tendency to relate the content to something that interests me.  For the most part, this has been astronomy.

When I go off on these tangents, students would ask all sorts of questions to keep me going.  Sometimes this was because they were genuinely interested and sometimes it was just to derail the class.  I would indulge them (and myself) for a little while and then steer us back to the task at hand.

Now I'm TEACHING astronomy and my tangents aren't off topic, but rather out of sequence.  I found myself saying "I promise, we will get to it!"

Today, we continued our look at the sizes of planets and their distances from the sun.  I began by giving a brief history of astronomy, moved into constellations, the discovery of planets, the move from geocentric views to heliocentric views and tying everything to mythology.

I was taken aback by how familiar my students were with basic knowledge of Greek gods.  Then I asked a question and everything feel into place:

"How many of you know this stuff from reading mythology and how many know it from Percy Jackson?"

Most of the hands went up for the latter.

Admittedly, very few students knew the Roman names, but as soon as I gave the Greek analogs, they knew exactly who I was talking about.

I wove history and mythology into a story with facts and figures and used them as a review of scientific notation.

I also noticed another MAJOR difference between my 8th graders and these students.

They wrote stuff down.  Eyes were on me, but when I put something on the board, heads went down and they copied.  I don't care all that much about them taking notes, but their willingness to do so means I should be able to engage them in more routine tasks when we have to do those.

They were FULL of questions!  With the exception of the small group of gentlemen who kept talking over me, I felt as though I was just telling a story for 5 periods in a row.  It was wonderful!

In regards to those gentlemen, a student came up to me after class to ask if there was another section that she could transfer into.  She loves astronomy and enjoys my teaching style, but is worried that they are going to ruin the class.

The only rule that I really have is that no student is allowed to detract from the learning of any other.  I plan to pull those boys aside on Tuesday and have a long talk with them.


Today was also the first double period for Honors Physics.  I handed them the Noah's Ark activity from the admirable Fawn Nguyen and told them that any answer they found would have to be thoroughly justified and proven.

They went to town!  Some of the students worked alone and some in small groups.  As I watched, they argued, moved around, worked with different people and came up to me looking for validation.

I refused to give it.

I forced them to explain their reasoning and wouldn't agree or disagree with the answer. 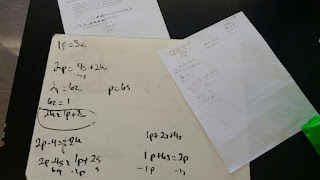 I am exhausted, but in the best possible way.
Email ThisBlogThis!Share to TwitterShare to FacebookShare to Pinterest