20 minutes had passed since class had started.  I've given my students 2 days in the library to work on their telescope presentations.  Even as juniors and seniors, I'm pretty amazed at their lack of research skills.  I know that they have had research projects in other courses before now.  This assignment isn't even very extensive.

In many cases, they have difficulty answering questions that are not spelled out explicitly for them.

They are being asked to find some basic information about a telescope or observatory of their choice.

It was fascinating to me to watch the differences in work throughout the day.

Period 1 has the lowest energy level of all of my classes. I attribute this to the fact that teenagers are not supposed to be awake at 7 in the morning, according to science.  The students worked well enough, but without enthusiasm.

Period 2 has an interesting mix of high energy and low energy students.  About half of each group worked very well while the other half spaced out.  The above question came from this class.

Period 3 also had a fair number of students working.

Period 4 rocked it!  They were loud and rambunctious, but they did great work! Without my showing them how, partners at different computers shared their Google Slides presentation with each other and worked on separate slides at the same time.  There was a fantastic level of collaboration and I was incredibly impressed.  This is the class that has, up to this point, given me the most frustration in terms of attention and behavioral issues. 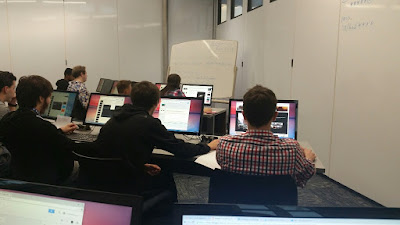 Today, however, they were great!  My favorite interaction from the class:

I missed a golden opportunity to retort with:
"That's not plagiarism, that's Pinterest."

Knowing your students is incredibly important.  Knowing their priorities helps you to know them.

Also in period 5, the student working at the computer next to me kept spouting off cool facts as he found them in his research.  He was so excited about it that he couldn't contain himself.  He was inspired.

No matter what else happens today, I got to witness an inspired student and was able to be a part of it.
Email ThisBlogThis!Share to TwitterShare to FacebookShare to Pinterest