Day 9: All Up In Your Grill

Posted by Justin at 2:51 PM
A major disadvantage to teaching 5 sections of Astronomy (or any class) right in a row is that I feel like I'm Bill Murray in Groundhog Day.
By the time the fifth section rolls around, I could do the class in my sleep, but I also forget what I told other classes, but didn't tell them.  This leads to me making jokes that reference prior classes that only I understand.

A major advantage, however, is that I have 5 tries to fix a lesson.

Today's lesson in astronomy dealt with wave motion.  We've solidly covered the difference between mechanical and electromagnetic waves, but I was struggling to illustrate the differences between transverse and compression waves.

The basic definitions (particle movement perpendicular versus parallel to the wave) are clear enough, but I like visuals, and I think they help to solidify the concepts.

Transverse visuals are easy.  I have a giant spring that runs the length of the room and I snap waves into it, demonstrating how the wave travels to the far side and back.

Compression waves are a little harder to see.  I can flick the spring, but the nature of the medium makes it less than clear.  Luckily, I had 5 classes to come up with a better way.

Period 1: Crappy visuals on the spring led me to add a few pieces of painters tape at regular intervals.  The students were able to see how transverse waves made the tape move up and down.  With the compression waves, they were able to see that the tape moved back and forth, but the visual wasn't great.

Period 2: I added the following scenario: "If you are in the hallway, you have a certain amount of room that you need.  If people get too close, you have two options.  You can either push them back, or you can move away.  The compression wave is you moving away and into someone else, who moves away."

Not a bad analogy, but not great.

Period 3: I did the same lesson as the two previous classes, but this time I had 2 students come up to the front and stand side by side with their hands up.  I took a step towards the first student and pushed on his hand.  Without my having to say anything, he stepped back and pushed on the second student, who stepped back.

Period 6: Same as previous, but with more kids and less physical pushing,  I just got close and they backed away.  The really cool thing about this was that students in their seats were able to see the wave as the delay of movement.  The last kid in line moved significantly later than I did as the compression of social discomfort and personal space violation moved down the line.

It was a pretty cool lesson and I think the students enjoyed it as well.

Who knew that violating personal space could be so educational!


After school, I opened my room up to have some students come in and play with the 3Doodlers.  I had an announcement yesterday and today and a few kids came and loved it! They had a great time playing around and I had a great time having happy kids in my room.  Hopefully, they will spread the word and the next time I can stay, there will be more kids. 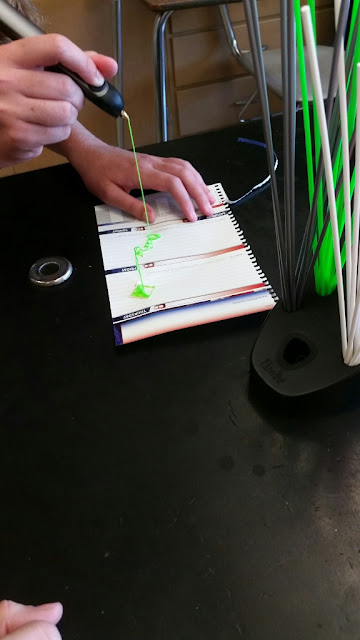 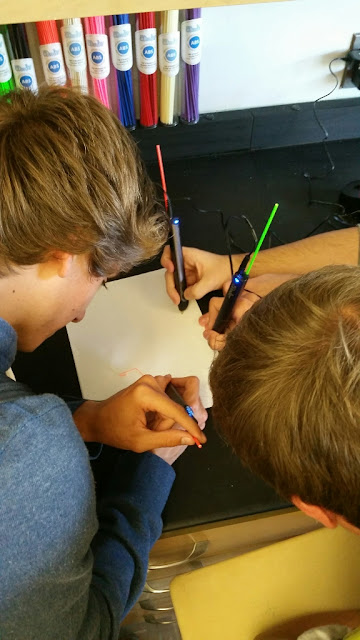 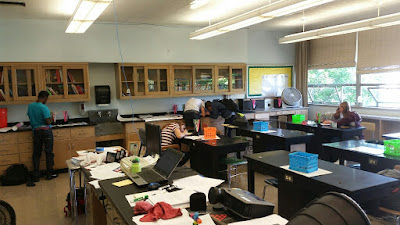