Posted by Justin at 3:21 PM
With my impending absence at the end of the week, I've been wracking my brain trying to come up with something for my students to do for 2 days.  What I decided on was 2 days of lecture and demonstrations and giving them guided practice on Thursday and Friday.

I'm using the Powerpoint that was developed by the Astronomy teacher in 2010.  I'm supplementing it with demos and videos to snag interest.  This means that a lesson on tides and the gravitation of the moon included a section where we watched videos of tsunami waves and discussed how they were NOT related to the moon.

I was having trouble conveying that the effects of the moon were caused by gravity and that, as such, did not change based on the phases of the moon.  No, the eclipse does not cause tidal waves.

I'm also having difficulty with how willing my students are to fill out notes.  I know that 90% of them will never look at them again, but the idea of "copying notes" off the board is so familiar to them, that they do it without complaint.  Kids who sleep during my class will sit up and copy down words from the board.

When I try to do demonstrations or tell stories, they talk over me, take naps, or generally don't care.  The idea that "learning" means copying from the board seems hardwired into them.

By the time 6th period came in, I was confident enough in the material that I decided to add a small demonstration.  Up to that point, I had talked about twirling a small child around in a circle and how doing so forces you to lean back.  You end up not spinning around your own axis, but one slightly in front of you.

In 6th period, I pulled a kid up and spin with her, showing how we were both leaning back, but the person with more mass (me) was leaning much less.

When she was dizzy and laughing, I left her on the floor and went back to my lesson.  Cause that's how I roll.

I did end up having to throw a kid out.  He's one of the brighter kids in the class, but he's developing an irritating habit of answering everything I say with "prove it."  After I asked him several times to stop, I had to toss him out.  After that, the rest of the class was pretty on the ball and we had a good class.

On top of everything else, since I believe in the strength and power of relationships (or something) I stood in the hallway between classes today, completely straight-faced, with my fist up waiting for kid to give me knucks.

Kids I didn't know pounded it as they walked by and were greeted by me changing my expression from silent and stoic to exuberance and smiles.

Yes, young man who looks like '80's Lionel Richie trapped in a Starbucks.  Yes I am. 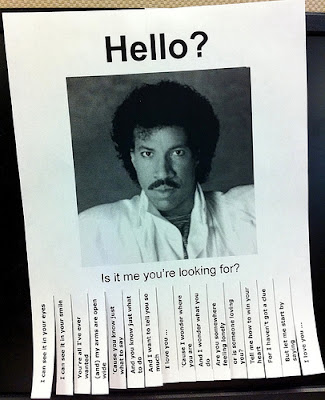 If you've read this far, thanks! If you haven't done so already, I would love if you would take 30 second and fill out my survey.  Thanks!