Posted by Justin at 3:13 PM
Standardized testing this morning.  8th, 9th, 10th and 11th grader took a statewide graduation test that will not be used for graduation, apparently.

I actively monitored the CRAP out of that test.  The kids in my testing group were awesome and worked very hard.

Due to the testing schedule, I only saw two of my classes today: one section of Astronomy and Physics.

In Astronomy, I'm taking a page from one of the other teachers and using a menu of options for assessment.  Students will get to pick whatever they want to do as long as they A) pick one assignment from each category and B) have a total assignment value of at least 50 points.

Science Contract - Inner Planets
Since I didn't want my one section to get too far ahead of the others, I used class time today to explain the concept to them and we had a discussion about what assignment options they should have.  Giving them a choice will, hopefully, increase buy-in and keep them from getting bored with the same types of assessments.

There some truly clever ideas from the students and several went onto the menu.  I'm looking forward to seeing what they come up with.


The physics class continued our discussion of Newton's First Law.  Yesterday, I gave them a worksheet with some scenarios, but no numbers.  They were to be thinking about inertia and force in a more conceptual way.

Some of the questions sparked some pretty fascinating discussions.  The one in particular that jumped out for us was based on Mini Golf.

A golf ball follows a circular metal rim through a 3/4 turn.  At the end of the rim, will the ball curve away from the turn, shoot straight out from the curve, or continue along the circular path?

We had advocates for each position and a very friendly debate among the students, each arguing their points.  The reasoning for all three was very sound, but we quickly discarded the "keeps moving in a circle" claim.

The students who said that it would curve away from the rim argued that throughout the journey, the ball is exerting a force against the metal.  When the metal stops pushing back, the ball would move outwards.

Thankfully, I have Hotwheels tracks in my room so we set up an experiment, got out a golf ball and tried it!  I was very impressed with their reasoning.  When they asked about whether speed was a factor, we tried it at different speeds.

I want them to be designing their own experiments and this was a great move in that direction.

Next up: THE SUPER LOOPER! 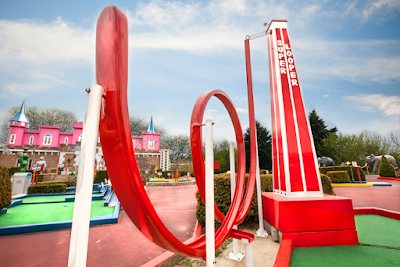