Posted by Justin at 4:24 PM
I think that this will be the last year that I keep this blog as daily reflections.  I hope (and plan) to keep writing when the spirit moves me, but I'm tired.

This year, my writing has received more scrutiny and has more concerns expressed about it than ever before and, while some of the complaints may be valid, it has made me feel as though I can't be as honest and open in my writing as I want to be or, more accurately, as I need to be in order to derive benefit from it.

I no longer feel safe.

I fully recognize that the majority of my discomfort and fear is entirely in my head.

My administration has been supportive of this blog since I started writing it.  I have been told that "I think your blog is awesome and it's good to reflect in writing."

No parents or administrators have complained to me about my writing.

But I still live in constant fear.


I will write that again because it's such a huge portion of my mental state and how I interact with my students.

I am afraid almost all the time.


I believe in what I do, in my goals, my methods, my outcomes.  I'm also not sure that I'm acting on them correctly.

The practical side of me says "yes, you have provided them with constant opportunity to demonstrate their knowledge and have tried to inspire them to be the best version of themselves."  It tells me that this small piles of notes and messages from students thanking me for being their teacher, for encouraging them to work harder, should help to uplift me and remind me that I'm doing good and right by my students.

The groups of students who come back to see me week after week, year after year, let me know that I am making an impact.

The student who failed my class for the year and still came to thank me for everything that I did for him and how much he appreciated it.

Perhaps that makes it worse.


I took my children to the playground this weekend.  In addition to the gaggles of young kids running around, there were 2 sisters and a friend of theirs, all between the ages of 11 and 14.  This older group was running around, playing, having a good time.  A woman stormed over the playground with a small flock of 5 year olds and began screaming at the teenagers for picking on her kids.

The teens immediately started apologizing, and claiming that they weren't picking on anyone.  I could see their defensive postures from 200 feet away.

When the woman finished screaming at them, they went back to playing, but the joy was gone.  It was obvious that they were done and just wanted to go home and, within 5 minutes, they left the playground, talking and walking slowly.

They had been yelled at, but they didn't get in trouble in any meaningful way.  There was nothing that the angry could or would do to them, and yet the adrenaline had been pumped, the nerves had been shot and the fun was ruined.  No matter how much fun the rest of the day had been, they were only going to remember being yelled at.

Each time I get an email from a parent or administrator, a stab of fear goes through me.  This is COMPLETELY irrational, but it happens nonetheless.

The camouflage of positive confidence keeps me from looking like the shivering mouse that huddles just below the surface.


I recognize that teachers receive more scrutiny than many other professions.  On one hand, we are shaping the future for society and for individual students, but on the other hand, we are people.  It seems as though teachers are not allowed to make mistakes, that we are expected to be experts from the day we graduate from college.

No one explicitly says this, but the expectation is there.

Every teacher knows another teacher, either personally or by anecdote, whose career was ruined by a single bad interaction with a student, parent or administrator.  Every teacher also knows hundreds of teachers for whom that in't the case at all.


I have seen teachers who are horrifically ineffective with both content and behavior management.  They go about their days (seemingly) without a care in the world.

Each time a student earns a grade lower than what they feel they deserve, I am terrified that it will spiral into administrative meetings and the end of my teaching career.

One of my graduating seniors has asked me to jump the cumulative year grade from 78% to 80% because it effects scholarship options.  I don't feel comfortable doing this but I fear that refusal to do so will have lasting repercussions for me.

I have no evidence to this end, but the fear is there, warring with the argument of integrity stating that said student, even knowing what was resting on the final grade, didn't do everything possible to get there.


Even without including students names, or even genders in most cases, I struggle writing about my negative interactions with my students.  Even though the goal of my writing is, and always has been to help me think through the situations and improve my own teaching practice.  Even though I have put Herculean effort into NOT allowing this blog to be a place where I complain, but rather analyze my own actions so as to improve.


I can't derive the benefits that I need from this blog if I feel as though I'm surrounded by Tommy DeVito. 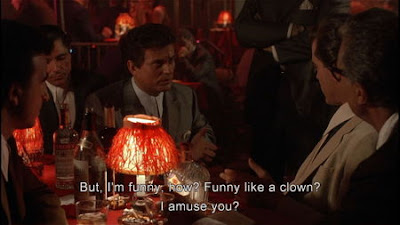 The whole point of having this blog be public, having my Twitter feed, be public is to keep me in check, but I'm starting to feel as though there is no longer balance.

At the same time, writing as much as I do (almost one million words since August 2013) is both physically and mentally exhausting.

There are 6 days left.
Email ThisBlogThis!Share to TwitterShare to FacebookShare to Pinterest