Posted by Justin at 4:40 PM
For the last 84 days, and for all of the 2014-2015 school year, I've had my students recite the Pledge to Improved Mathematics to start class.  It's used to ground the class in the principals that drive instruction and learning and give students a better understanding of what I'm looking for in their work. 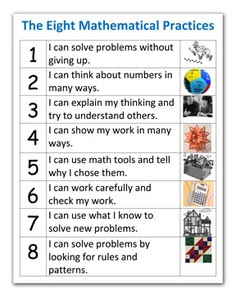 I often refer to these in class, asking a student to read a specific practice so that I can make a point about goals and purpose.


In Math 7 today, I put a series of problems up on the boards scattered around the room and had students complete them, either alone or with a partner.  They were to use algebra tiles to represent the numbers and variables, displaying them in  way that made their work clear to the rest of the class.  Students selected which problems they wanted to work on and went to it.

Some of them did an excellent job and some needed a bit of guidance, but all of them worked incredibly well. 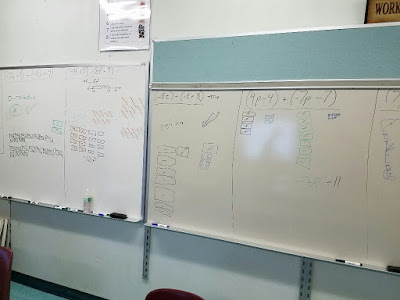 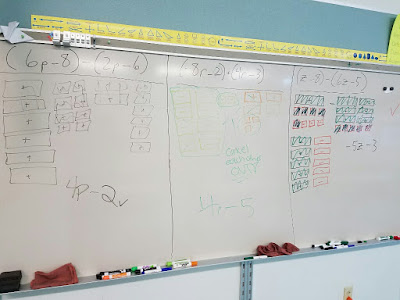 When we began going over the problems as a group, there was one student who hadn't finished.  Indeed, that student had barely gotten started.

Except that wasn't exactly true.  During the work time, I watched as that student started the problem, then erased it and started over several times.  That student stood, looking at the work, counting tiles and thinking before trying again from the beginning.

By the time the rest of us were ready to go over the problems, this student had only just completed the diagram of the set-up.  When it was time for them to present, they said they hadn't finished and I praised them to roof.

"What I absolutely love is that even though you didn't finish the problem, you worked on it the entire time.  I watched you check your work and start over several times.  You may have been confused and frustrated, but you never gave up one it.  Read me Number 1, please."
"I can solve problems without giving up."
"Exactly! The 'solve problems' part is MUCH less important that the 'without giving up' problem.  Anyone can keep working if the work is going well, but it takes much more effort to keep working when it's going poorly.  I can't even express how proud I am of you!"


This is a student who is very distant in class and frequently expresses negative self-talk, using words like "stupid" and "dumb."  I address this talk whenever I hear it, but it's much more difficult to get inside a student head and make corrections there.  This praise was authentic and important.  I wanted to make it incredibly clear to this student, as well as everyone else in the class, that the first Standard of Mathematical Practice is, by far, the most important factor to success.

In Pre-Algebra, we continued our work on the angles associated with triangles, both interior and exterior.  Today's activity involved the students using a protractor to measure those angles.

I made a smart choice to give a brief tutorial in how to use a protractor and saved myself incredible frustration in teaching them individually. 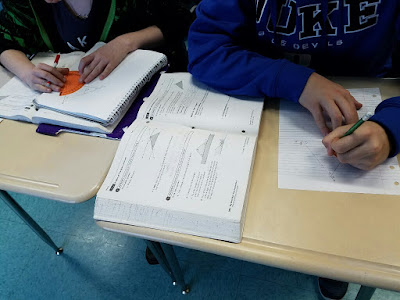 I may actually be learning something about how to teach!
Email ThisBlogThis!Share to TwitterShare to FacebookShare to Pinterest