Posted by Justin at 4:29 PM
It was, overall, a pretty good day. I handed back assessments, showed my colorful grade book to the students and had them Notice/Wonder about it.  They identified which skills we needed to readdress as a class, and which needed to be covered on an individual basis.

I reminded them again how reassessments would work and what they needed to do in order to take them.

I also talked about importance of showing their work using one of the examples on the assessment. 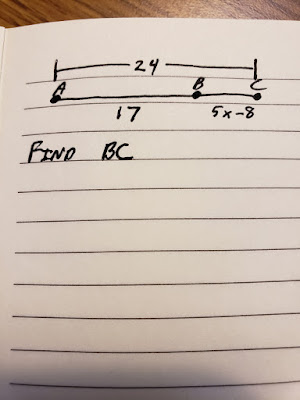 There were a large number of students who gave the answer to this question as "3."  With no context, this could have a been a random number, conjured from the ether by sacrificing a protractor, inscribing a ouija board on a coordinate place and asking the spirit of Pythagoras for the answer.

This wrong answer provides me with no clue as to the thinking or understanding of the student.  Under the current grading system, this answer would earn a 5. It shows an acknowledgement of the problem, but with no demonstration of the concepts that were covered in class.

Unless, they showed me how they arrived at this wrong answer.  This would make the answer any less wrong 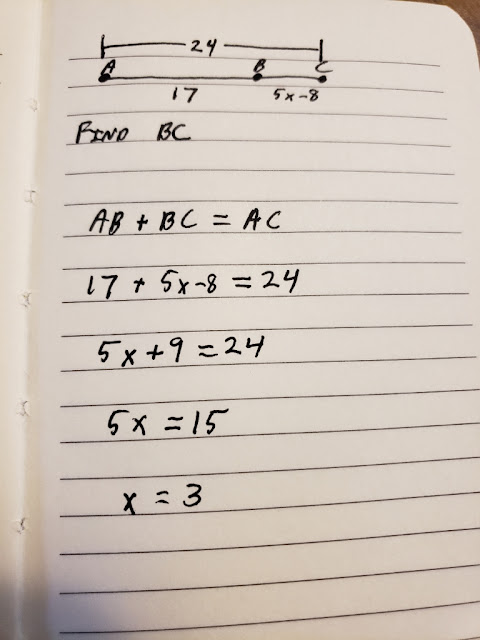 Unless it DOES make it less wrong.  While 3 isn't the answer the question I asked, it IS the answer to an intermediary question, that being "what is the value of x?"

Showing how they arrived at the answer of "3" tells me two VERY crucial pieces of information:

1) Whether the kid actually knew what was going on, or if they had stumbled upon the number.

2) That I need to make sure I address the issue of answering the question that I'm asking.


While the original answer would have received a score of "5," the second answer, with the demonstration of thinking would receive an 8 or 9, indicating mastery of the skill for which I was testing (I can use the Segment Addition Postulate to describe how segment lengths relate to each other) but also recognizing that the work wasn't perfect yet.

With this being the first exposure to Standards Based Assessments for many of my students, I wanted to take the time to demonstrate what I am looking for and explain why I'm being picky about what I want.


All too often, we hear complaints from students claiming that they studied, but what they studied wasn't on the test.  There aren't "tests" like these in real life (except in academia, which is, arguably, not real life). So if we are going to insist on testing in this fashion, rather than having practical exams, then we need to make sure that we are assessing the skills and habits that we are teaching and emphasizing in class.

School is confusing enough without having arbitrary goals going unexamined and unexplained.

I may be wrong, but I don't think it's too much trouble to explain to students not only what we want and expect from them, but why we expect it.
Email ThisBlogThis!Share to TwitterShare to FacebookShare to Pinterest