Posted by Justin at 4:07 PM
Yesterday was not a great day.

I chalk it up to a combination of spending time with my children, talking with other teachers who are immensely supportive, and spending a few hours sailing around the Caribbean waters of the 1600's as a privateer hunting down British and Spanish merchant ships for plunder.

I cannot adequately convey the therapeutic benefits of chasing a merchant vessel around Nassau and firing heavy shot cannons into their hull.

All in all, I came in this morning feeling much better.

I had a tense interaction with a student before first period even started and had to remove her from the room.  After she and I had both calmed down, she came back in of her own volition and we had a very good conversation about the lesson.  I sat with a group that, up to this point, has been the most disruptive and the least productive.  With me sitting there, they worked very well and asked good questions.

I pulled her aside later in the day to let her know how much I appreciated that she came back in and helped to make the class productive.  I need to do a better job of taking steps like that more often.  Students need to know that they are allowed to mess up and it won't make you hate them.

We've been entered the topic of square roots and I have framed it in a way that it different from what they're used to.

Traditionally, we teach students that the square root symbol asks the question "What number multiplied by itself gives us the number under the symbol?"

However, since we have been talking about fractions in terms of rectangles, I framed the discussion in a different way.

I started by asking them, since we've been talking about using blocks, to write down all of the ways that they could represent the number 6 using multiplication.  They gave me exactly what I wanted: 1x6, 2x3, 3x2, 1x6.

For each representation that they gave, I made a cluster on the board with those dimensions.  I asked them to do the same thing for 12.  I put those up too.  "What do you notice?"

"The ones with 12 are bigger because we had more blocks
"Each one is doubled, it has the same shape, but flipped on it's side. Like 1x6 has 6x1."
"They are all rectangles"

Then, I asked them to do the same thing for 16.  With all of the representations visually on the board, I asked them what they noticed.  Eventually, we got where I wanted: 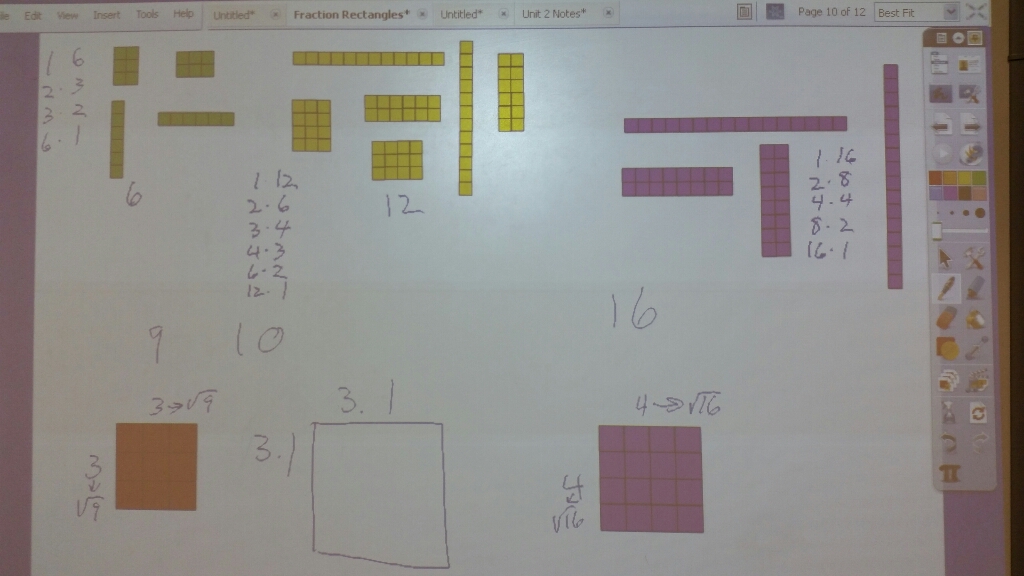 The discussion proceeded  to talk about shaded squares and how the square of 16 (or 9 or 25) blocks was related to the number 4 (or 3 or 5).

We got around to the main idea:

We did several examples of how this worked, including how to use it for the square root of fractions. 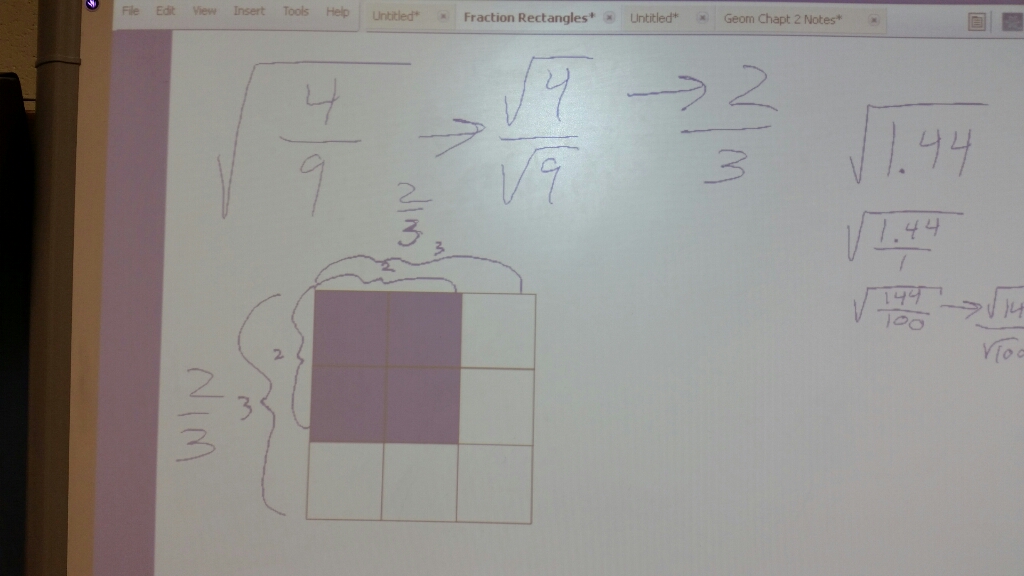 The students seemed to really grasp this and, when we spent the second half of the class working on practice, they did VERY well.

I was able to sit with different groups, helping to guide them towards success.  As I saw my students using their phones, I confiscated them, signed them up for my Remind class and gave them back.

It was really nice to have the majority of the students working well so that I could spend time with those who needed me the most.

It doesn't happen often, so I'm very pleased when it does.

It was a good day.
Email ThisBlogThis!Share to TwitterShare to FacebookShare to Pinterest