Posted by Justin at 4:09 PM
I was out yesterday (hence no post) and when I returned, was greeted by a lengthy note about the inappropriate behavior of one of my classes.  My other two did fine work, according to the sub.  According to other teachers, however, several students who normally present me with challenges were out providing that service to others around the building.

I arrived back today feeling disappointed.

Some of it was in the students, but mostly, I am disappointed in myself.  I thought that I had set up my expectations in a way that would increase success in my absence.  That was the case in 2 of my classes and I made a special point to thank them for it.

In honor of Halloween and the fact that we've been working on exponents, I decided that today would be a perfect day to do Pandemic.  This is a lesson about exponential growth from Mathalicious.  In last years class, this was wildly successful.

When I began it in period 1, the students were very excited and interested.  One girl asked why we couldn't do lessons like this all the time.

As the class progressed, I became increasingly frustrated with the amount of time I had to wait for them to stop yelling about Twilight.  Each new idea sparked a new round of yelling.  It was on topic in that it was about vampires, but that was all.

"I really appreciate your enthusiasm, but maybe lunch would be a better time to talk about Bella and Edward.  Right now, the discussion is about this little town infested with vampires."

I did appreciate their enthusiasm.  What I did NOT appreciate was their unwillingness to stop yelling out.  For the most part, it was the same small group of students with whom I am frequently addressing their outbursts.


It occurs to me that our system has done such a wonderful job of crushing participation and enthusiasm that students often don't know how to participate productively or appropriately.  We don't have a system in place for the difference between time to talk and time to listen.

I didn't get to finish the lesson.  I gave up.  I just didn't have the patience to constantly be talking over students or asking them to be respectful of me and their peers.  A handful of kids got REALLY angry at their peers for ruining what could have been a cool lesson.  I did my best to apologize to them individually for being unable to maintain a learning environment in my class.

I addressed the girl from the beginning of class. "This is why, my dear.  This is why we can't do more activities like these."

After I sat down, a young woman came up and asked me to grade one of her late assignments.  She was a major perpetrator of the disruption in the class.  She has spent the period working on late work for my class as well as for history.  She was talking and laughing loudly with students on the other side of the room and consistently yelling out off topic questions for the entire period.

I did not react the way I should have.

"I'm sorry.  I'm very disappointed in your behavior in your behavior today.  You were constantly disruptive and made it impossible for me to teach the rest of the students who were interested.  Now, you are asking me to do you the favor of accepting late work and grading it now, when I should be working with your peers on this lesson.  These are the actions of someone who thinks that what they are doing is more important than everyone else."

This is close to what I should have said.

"You were rude to me and your classmates for the last hour and now you want me to do something for you? The marking period is closed and I will not be accepting that work."

This is closer to what I did say.

I am pleased that I refrained from screaming at her, but my anger has a tendency to come with quiet rather than volume.

Plus, getting into a shouting match with a teenager is always a mistake.

I began typing this entry by talking about the flaws in the system and what behaviors we should be punishing versus what we ARE punishing.  I typed out about 2 paragraphs before I deleted it.  This blog is supposed to be about me and what I can do to improve my practice.  Complaining about the system won't help me become better.

I need to talk to someone about how to accomplish the goals I've set for myself and my students in the current environment.  Every school in every district has its challenges.  The good teachers are the ones who find ways to overcome those challenges.

The rest of the day went VERY well.  The students were interested and engaged and we had excellent discussions.  They displayed enthusiasm, but brought it back together when it was time to move on.

The best discussion happened when we began to discuss immunity.  The question came about whether a person who is immune to a disease could expose others to it.  One of my geometry students came up with a great analogy that gave me a great idea for a demonstration/activity.

The idea was that everyone is wearing velcro suits.  One person is covered in fuzzy balls and begins to throw them at other people.  Anyone who gets stuck with a ball is now infected.  People who are immune don't get velcro suits and the balls just fall to the ground.  No matter how many balls are thrown at that person, they will never stick and so that person couldn't spread it to others. 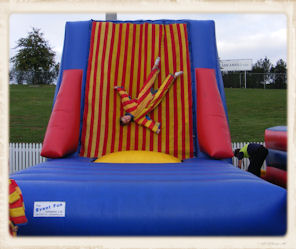 This was much less morbid than my analogy, which was that I had 5 puppies to give away.  One of those puppies died and couldn't have more puppies.

I liked the student idea better.
Email ThisBlogThis!Share to TwitterShare to FacebookShare to Pinterest