Posted by Justin at 7:05 PM
Quiz day provided some interesting opportunities.  As the first real grade of the new marking period, the students seemed to put more effort in than previously.  We also spent several days doing practice problems so their confidence may have been boosted as well.

After a few of the students finished, I sat down with them and we played Swish.  This game is fantastic for many reasons, not the least of which being that it helps players to develop the visual manipulation skills that promote understanding of geometric transformations.

During the second half of class, we went into the computer lab so the students could work on the computer-based academic intervention that the district has purchased for them.  A few of the students, however, played On The Dot for the period. 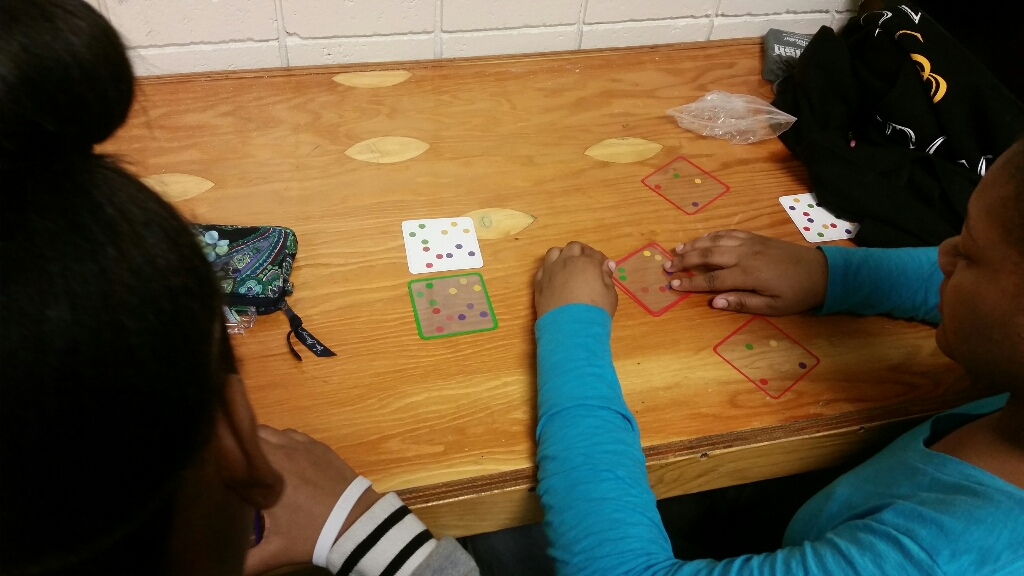 I'm always in favor of educational games when the kids don't know that they are educational.


The Geometry kids were given a Number Theory task today:

If I give you an integer, I want you to give me a base Pythagorean Triple that contains that integer.

I started off by thinking of a quality and talking about examples and non-examples to get them to figure out what that quality was.
"Marquise has it.  Reilly has it.  Dawon doesn't.  Kayla doesn't."

Every time they guessed a quality (blond, long hair, glasses) I would pick someone else who didn't fall into that quality, but into mine.

Eventually, someone realized that I was talking about long sleeves.  I started over with a  new quality. (hair parted on the left)

We had an interesting discussion and I need to come up with some qualities to continue play it tomorrow.

I am, however, starting to become concerned with that class.  I'm noticing a trend towards bad decision making.  Students who have never been rude before are starting to be.  I had parental complaints, and student complaints, that we were not doing enough practice problems in class, not taking enough notes.

So for the past week, I've been doing more problems, giving more notes.

The students who complained are still not engaged.  I clearly need to find something else there.


The quiz at the end of the day didn't go nearly as well.  It took them much longer and I had to remove several students who wouldn't be quiet.  By the end of class, I had my students split between 4 different locations, including 1 student who was isolated in an empty room..  I called 2 different parents during class and had to move multiple seats.

It's hard to figure out when to simply give up and throw kids out and how I can help them.

I'm not sure than I can...
Email ThisBlogThis!Share to TwitterShare to FacebookShare to Pinterest