Posted by Justin at 4:21 PM
This Saturday, I was lucky enough to be able to attend EdCamp PGH.  This is the 4th time that the conference has been held and the 3rd time that I was honored to be on the planning committee.  The conference went VERY well.  We received a ton of great feedback and I was able to have excellent conversations with teachers and students.

The discussions covered race, gender, providing a safe space for students, how we teach and being connected educators.  There were other session about augmented reality, gamification, badging and Maker Ed, but with limited time, I had to forgo some of the sessions.

As usual, I left Edcamp feeling lively and energized.  I met some fascinating people who challenged my way of thinking and helped me to clarify my own beliefs.  I was able to speak with people from diverse backgrounds, both personally and educationally, and hopefully helped them to grow as much as they helped me.

Now the trick will be to maintain that energy through the next 14 school days where students will spend almost 30 hours taking standardized tests.

No amount of teeth-gnashing and eye-rolling will change the situation.  So now I'm asking myself this:

What do I do on testing days?

The answer that I know I should give is "it is still an instructional day, albeit a modified one.  Why should it be different?"

But it is different.

The schedule is moved around to ensure that student don't miss their morning classes for all 9 testing days.  The classes that we DO have will be truncated to accommodate the lunches.  Since I have double period classes, there are a few days when I will have single period and a some where my students will leave me and come back a few period later. The entire routine is disrupted.

I don't feel right trying to continue my classes as normal, knowing how the adolescent brain works.  They will be burned out and exhausted, both physically and mentally.

So I think we will be playing educational games and exploring math more than trying to cover new content in the structured manner in which we have been working.

I think I finally have enough hexagons for a class set.

Today, the geometry class discussed the spider/fly problem from Friday.  I was disappointed at how few students had attempted the problem over the weekend, so it ended up being a discussion rather than a presentation from the students about their strategies.

The discussion however, was quite good.  The first question was fairly easy and involved use Pythagorean Theorem through the middle of the room.  It seemed as though everyone got that.

The second question, however, required students to have more visual and spacial understanding rather than calculation.  One of the students asked "What if that line went along the bottom and the back wall instead of through the room?  Wouldn't that be the shortest route?"

I had been waiting for this and wanted them to work on this independently to find the length, but it quickly became clear that they were having tremendous trouble visualizing where on the back wall they should go.  It looked like the midpoint, but was there a way to prove that?

It took almost the entire period to get the suggestion that we should break up the cube.  After some clarification of language we got to our version of this great image from Spiked Math. 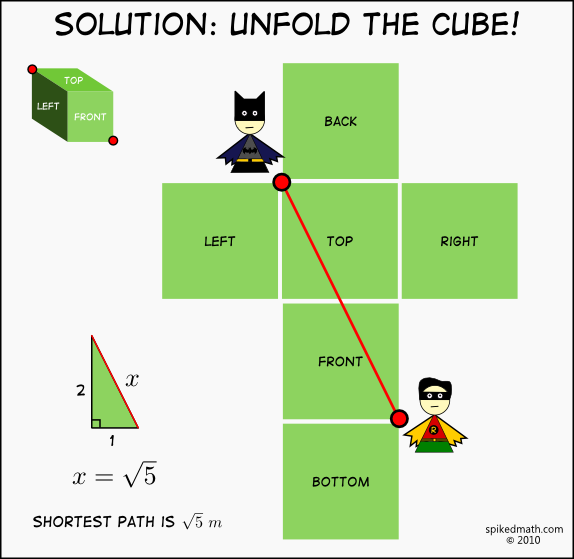 Without this thought to unfold the cube, this problem is insanely complicated.  I want them to be thinking "outside the box."

I'm ashamed of that one...
Email ThisBlogThis!Share to TwitterShare to FacebookShare to Pinterest