Posted by Justin at 4:00 PM
The school firewall has finally (re)blocked Pandora.  So, like any well-adjusted person who has lived with internet for most of their life, I pulled up YouTube to see what playlists I could find for good music.  I stumbled on the Top Alternative Rock Tracks list with 50+ from the early '90's to the mid '00's.

After some Red Hot Chili Peppers and 4 Non Blondes, I was feeling ok about the fact that my room was in the 80's at 6:30am.

Perhaps that's been my problem this year.  Perhaps I haven't been starting my days with the right music.  As a result, I cry sometimes when I'm lying in bed, just to get it all out, what's in my head.

The Math 8 kids turned in their Day Care Projects today (or didn't) and the Geometry kids either turned in their Pythagorean Theorem models or took the unit test.  I think the kids who took the test are regretting not making a model.

The test was hard.  Several of the students didn't finish, which doesn't really surprise me.  More than previous groups, this group of students seems to have difficulty completed tasks in an appropriate amount of time.  It's hard to tell if it has to do with lack of understanding, lack of time management skills, or lack of confidence in their answers.  Either way, it translates to them taking an extraordinary amount of time to complete basic tasks.

As poor as the results of the test are, the results of the 3D Pythagorean Theorem problems are pretty great.  The problems themselves were fairly basic, but that's fine.  The models were VERY cool and it was obvious that some of these kids put a ton of work into them. 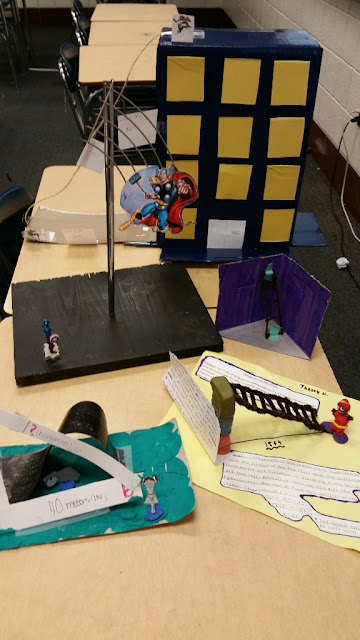 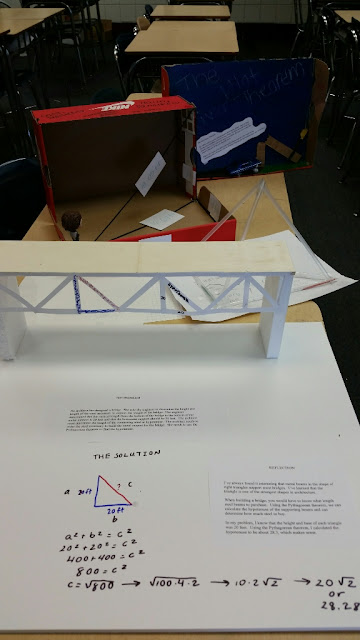 It seems as though several students in my 8th period are intentionally trying to get under my skin.  I've been doing a fairly good job of not letting them, but they came close today.  I ended up having to call a few parents when the defiance and obstinate behavior became too much for me to deal with.

As the year ends and I look back on the progress that they have made, or that I have made with them, there are clear successes and clear failures.  There will always be both of these.  The trick is to learn from the failures and celebrate the successes.

I'm working on that.

As if to underscore this point, my day ended with a former student coming to visit me.  It made my day and reminded me that I am making a difference, even if I don't always realize it.
Email ThisBlogThis!Share to TwitterShare to FacebookShare to Pinterest