Posted by Justin at 4:00 PM
Which One Doesn't Belong? 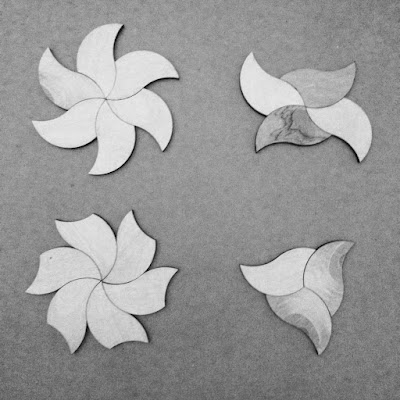 Our Monday warm-ups have been images like this.  The students are asked to justify why each of the four objects/shapes wouldn't belong in the group.  Sometimes the differences are easy.

Some, not so much.

Today's warm-up took us to some interesting discussions of symmetry, color and optical illusion.

It looks to me as though the shape in the bottom right corner is three-dimensional, folded together like the top of a box.  The bottom left corner is the only shape where the most distance point of the shape is facing in, instead of out..

The discussions went well until I had 4 students in a row give me the exact same reasoning.  This wasn't because they cheated off of each other, but rather because they weren't paying enough attention to notice that 3 other students had said the same thing.

This happens repeatedly.  It's the Inception of answers.

I spoke with another teacher at length about this and she said she sees it in other classes as well.

I think I need spend more time asking students to "put her answer in your own words.  What did she say?"

Kids have learned bad habits. Is it better to move them on knowing they aren't ready, or hold them back and make them hate school, thinking they are stupid.

It's almost like grouping kids by manufacturers date is tremendously detrimental.
Email ThisBlogThis!Share to TwitterShare to FacebookShare to Pinterest