I'm a numbers guy, and I screwed up the numbers!

One of the more difficult aspects of doing Standards-Based Grading inside of a traditional grading system is the conversation.  How do you equitably convert a 4 point scale to a 100 point scale?  In SBG, a 2 isn't failing, but means basic understanding of the concepts.  In a traditional system, this usually means a C (70-80%).  A straight conversion would put the 2 at a 50%, which doesn't accurately represent the level of understanding in the course.

When I set up my scale, I set the conversions as follows:

With this scale, my classes were averaging 73% overall.  This is a little lower than I would like, but well within reasonable parameters.

Except for the mistake that I made.

This isn't a major difference, but it meant that my points didn't correspond to the appropriate grade.

This change brings the class averages back into line with the appropriate letter grades.  This was entirely my mistake and it didn't occur to me to do this until today.

I accepted responsibility for it and asked my students for forgiveness of the oversight.

In 8th period, something incredible happened.

At the end of the day, a kid came up with an odd strategy:

I looked at him skeptically.

When students develop their own strategies and algorithms, they may stumble on the right answer without having a valid mathematical reason.  This happened with a few other strategies that students offered.  When I tried the previous ideas using different numbers (24*26) it fell through. 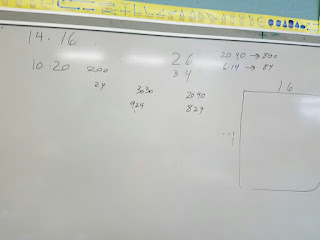 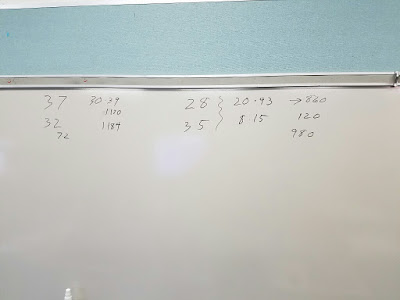 What was that about?? Does it work with any pair of 2 digit numbers?  Like a good mathematician, I realized that I needed to do a general proof.

I started by setting up general terms for 2 two-digit numbers (10x1+x2 and 10y1+y2) and multiplied them.  Then I went through the process that the student described with the general terms and, lo and behold, it works in general! 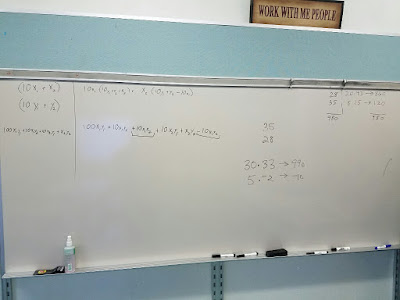 My favorite part of this was that I was doing this proof and exploration while students watched, letting them see my excitement, my methods.  The pre-algebra students saw the algebra I put on the board and, while they found it a bit intimidating, many of them were interested and wanted to me to explain what I was doing.

Math isn't magic.  It's the language with which we describe reality.
Email ThisBlogThis!Share to TwitterShare to FacebookShare to Pinterest