Posted by Justin at 4:17 PM
Several factors of frustration built up this morning before the students even came into the building.  There were a few that were school related and a few that weren't.  The end result was that I was already irritated and short-tempered by the time my homeroom got into my class.

This has happened before, so why was today different?

For whatever reason, it was just too much to swallow.  Normally, I'm able to force it to the back of my mind and be present for my students, but no matter how I tried, I couldn't separate them from my frustration.

I responded to several students in ways that were not how I wanted.

They used to tell teachers that you shouldn't smile until after Thanksgiving.  I suppose this was to establish the seriousness of education, or remind students that you are the authority in the room.  I don't believe this.  I believe firmly that relationships are what build education.

Students will work for a teacher they like, even in a class that they hate.  I want my students to learn from me and they won't learn as much as they could if they hate or fear me.

So I talked to them about it.  I told them that for reasons unrelated to them, I wasn't feeling great.  I was annoyed and irritated, but it was by no means anything that they had done.

"I am feeling off today.  I wanted to tell you so that you know it has nothing to do with you.  There are other things going on that have me a little upset.  I'm trying to keep it separated from here so that I can be the best teacher I can be, but if it leaks through and I seem upset, I wanted you to know ahead of time that it's not about you at all  You guys are doing what I've asked and I greatly appreciate it.

"With that said, I would appreciate if you would be your normal charming selves and not pretend to be jerks."

My homeroom REALLY stepped up!

I want to be incorporating more presentations and explanations into my lessons, so I tried something new today.  I broke the class into groups of 4 and assigned each group one problem from the homework.  Each group got some whiteboards and markers and were told they would be presenting their problems.  Each group used a different method to present, but all did a great job! I had the students applaud afterwards and will be emphasizing the importance of supporting each other. 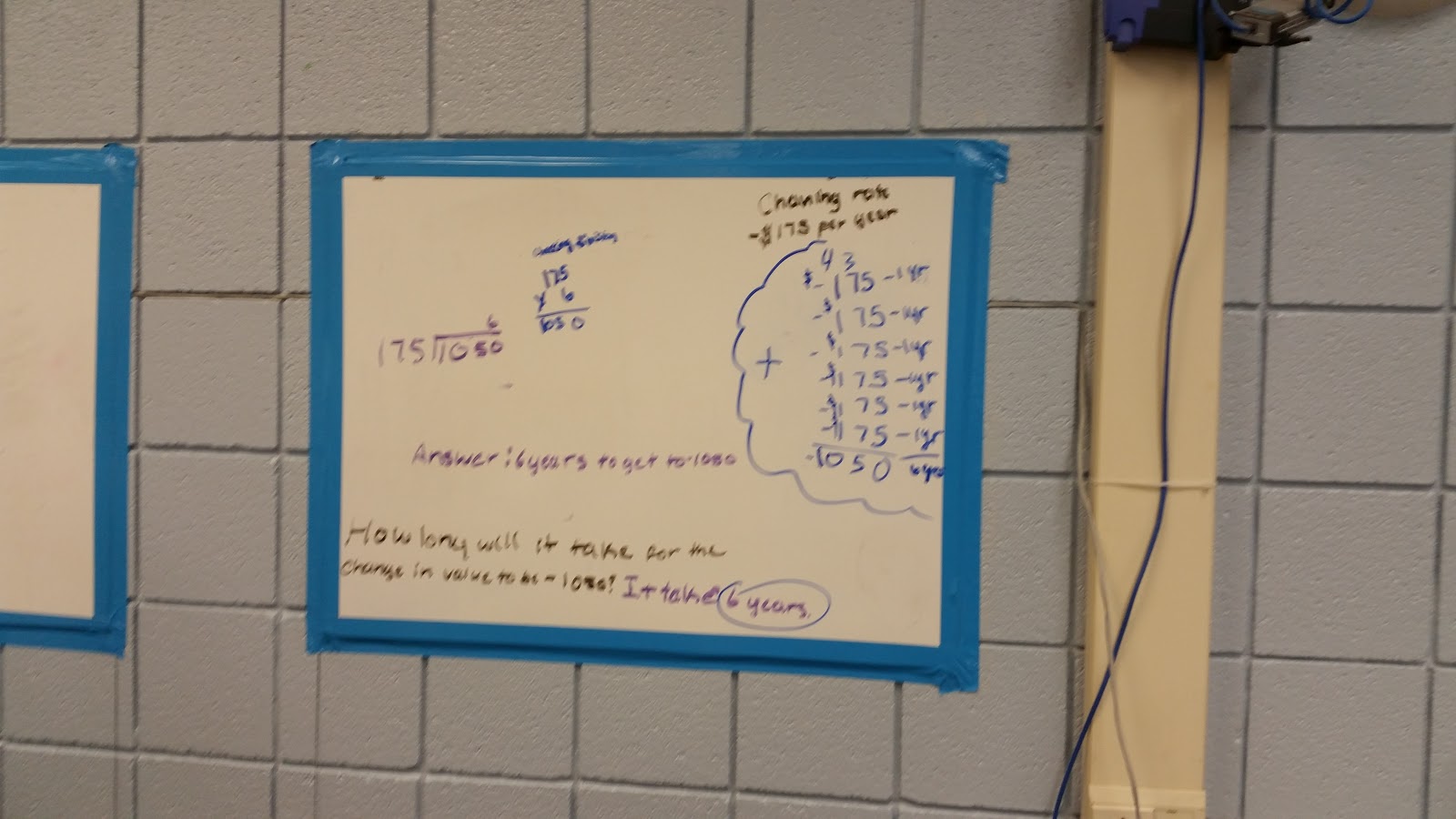 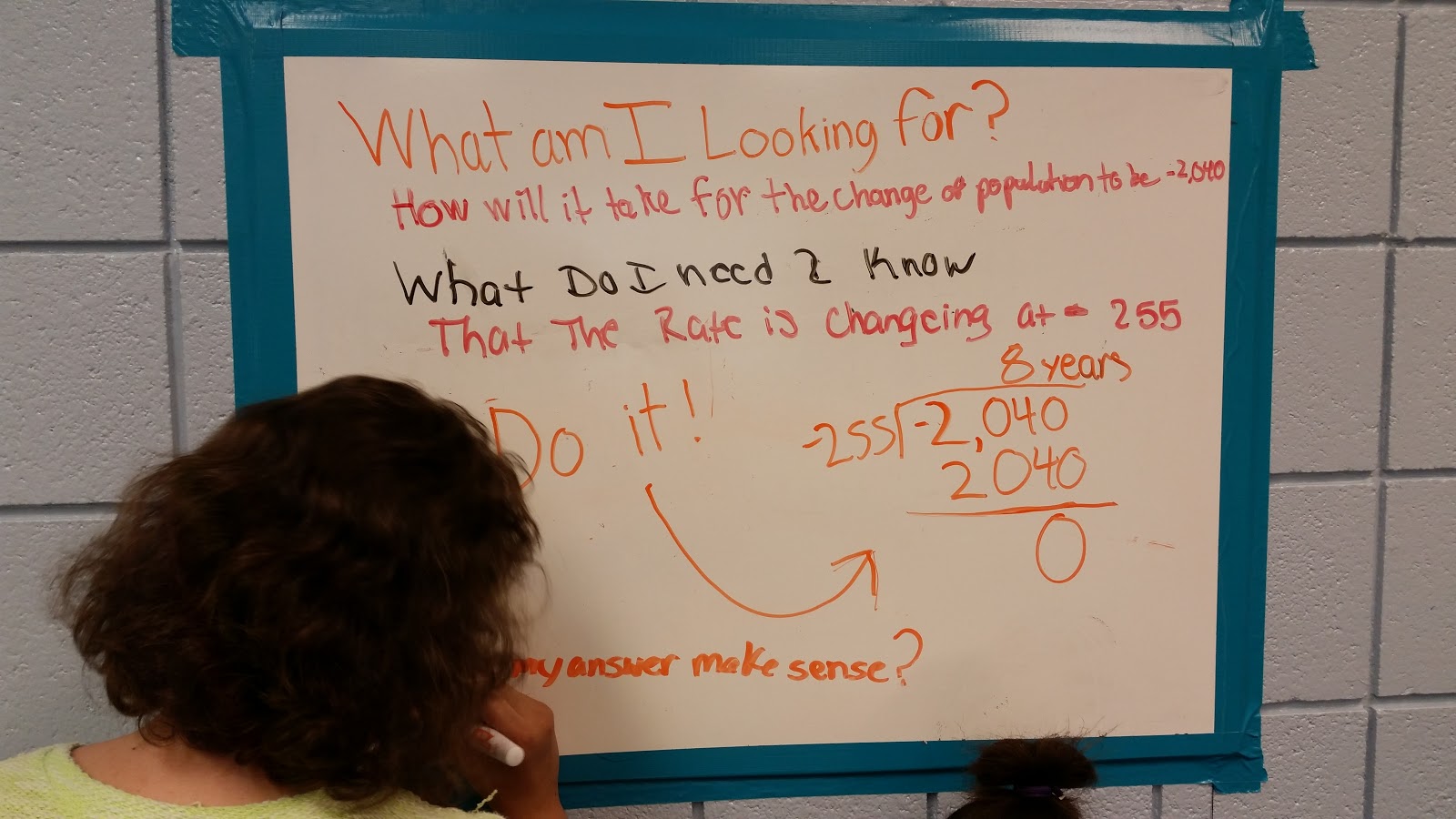 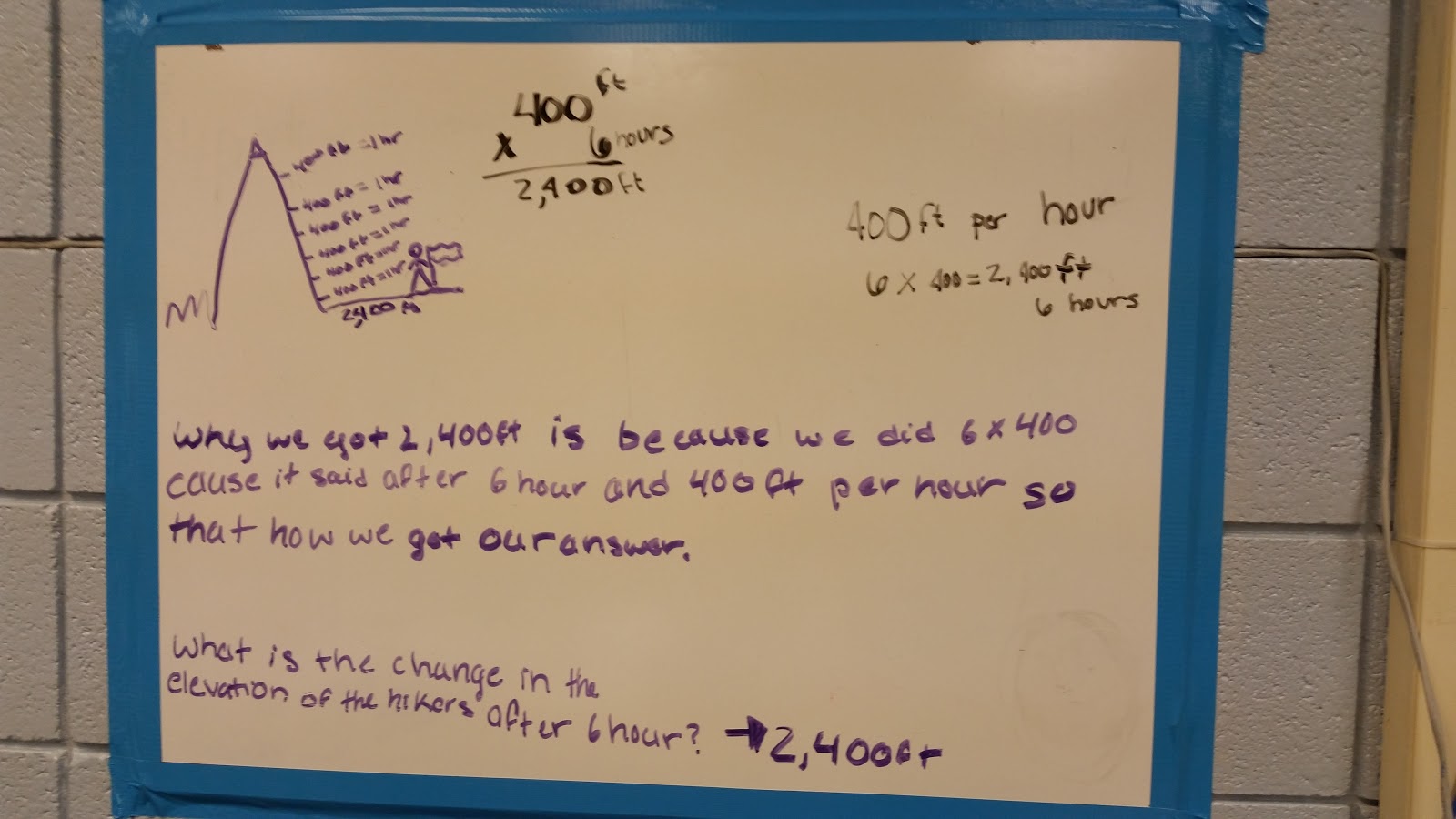 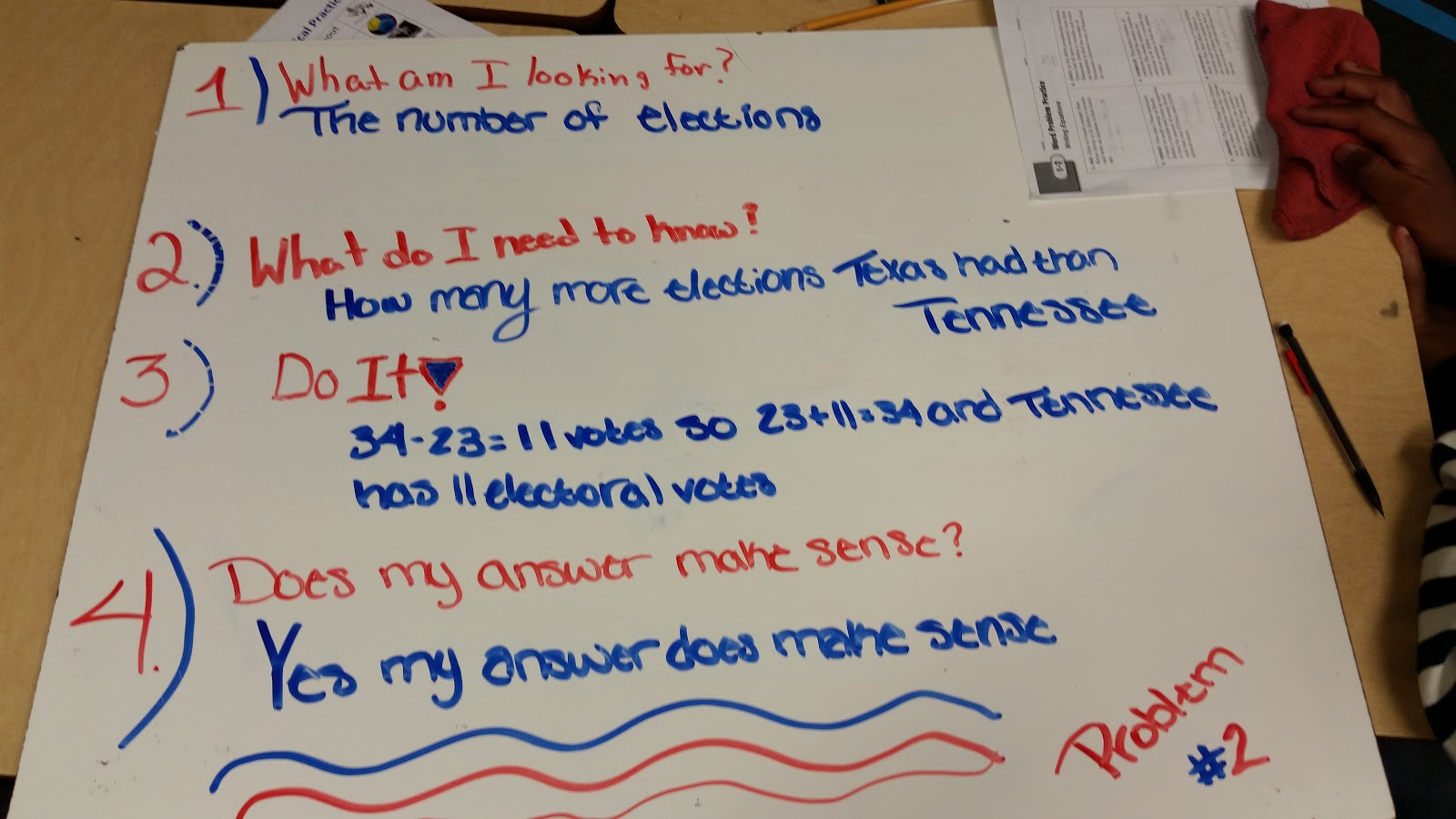 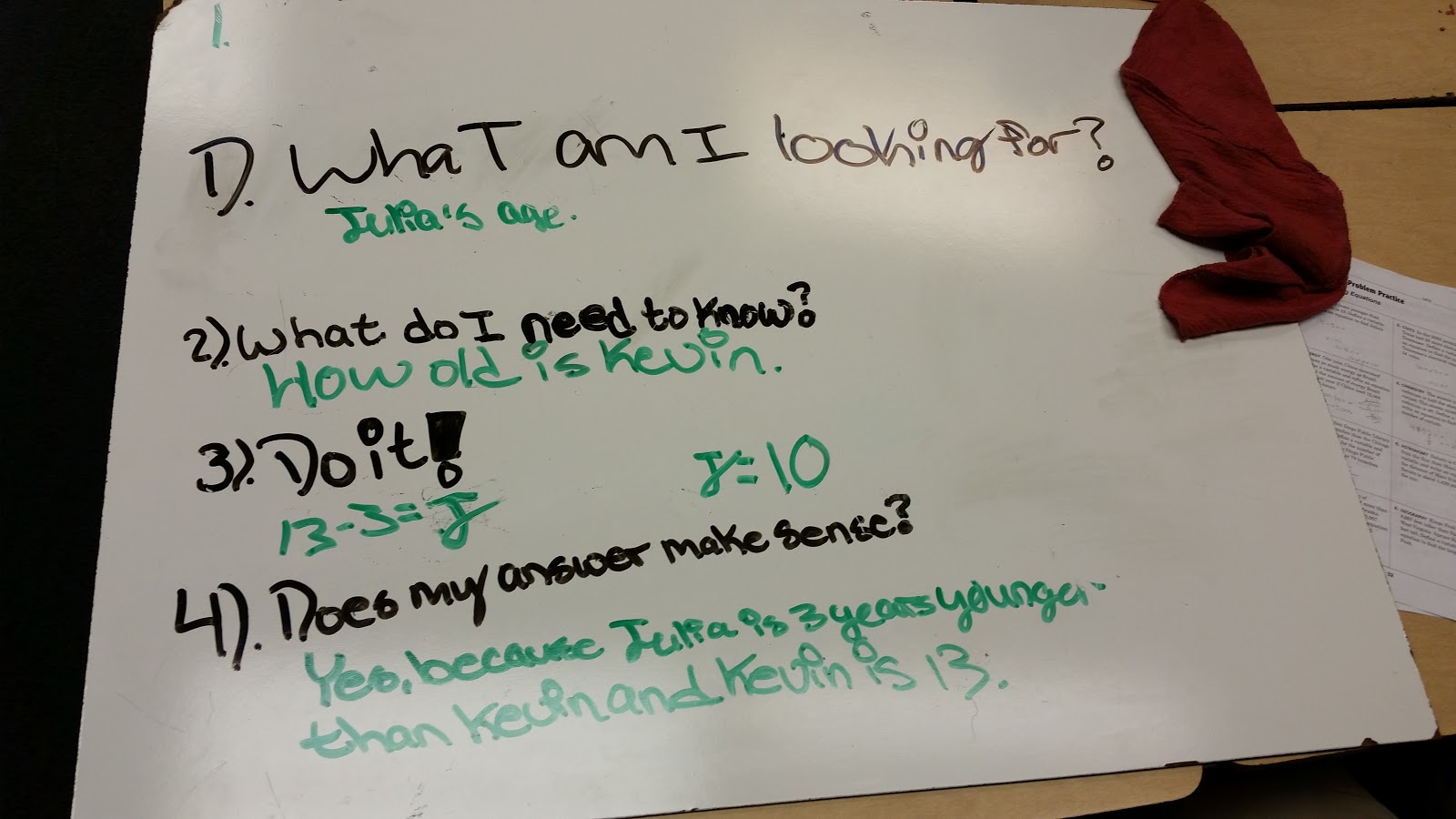 At the end of each presentation, I asked the class to "tell me something that I love about what they did there."  They always had something.

"You loved how they wrote down the 4 steps."

"You loved how they showed all of their work."

"You loved how they used a picture to solve the problem."

The only one I had to drag out of them was how, in the last picture, the group used a variable to represent the unknown quantity.

8th period did not do as well with this activity.  There were several students who, not being in class yesterday to receive the assignment, tried to claim that they couldn't help their groups.  I'm still having trouble modifying my expectation for a class that meets in 85 degree heat after a day of being cooped up in 85 degree heat.  I allow them more latitude in terms of conversation and off task behavior, but I'm feeling as though the time for that is coming to a close.

I also think that the social make-up of that class is vastly different than period 1.


In geometry, while going over one of the examples, a student expressed that she felt defeated by the math.  I thanked her profusely for her willingness to admit her feelings to others as I'm sure that other kids felt the same, but didn't want to say so.  I also pulled up the link to this great post from Megan Schmidt.  It talks about empathizing with students who feel this way.


In addition, starting yesterday, I'm beginning each class by having a student read the 8 Standards of Mathematical Practice.  Eventually, I have the class recite it as a group.  We make them stand and say the Pledge of Allegiance every day, so why not these?

I consider the 8 SMPs to be the Pledge to Improved Mathematics.
Email ThisBlogThis!Share to TwitterShare to FacebookShare to Pinterest