Posted by Justin at 4:35 PM
In pre-algebra, I was at a bit of a loss for an activity.  I wanted to do something content based, but more than just "here's a worksheet."  I'm already worried that I'm talking to them too much and the fact that a few groups continue to talk over me seems to indicate that I'm right.  As I said before, I don't want to be spending time working on skills they should already know, like addition, subtraction and order of operations, so I'm integrating them into the lessons.

Today, I gave the students a worksheet with 12 word problems on it.  I told them again to use the 4 problem solving steps that we've been talking about, that I have left on my side board for almost a week.  I handed out whiteboards and markers and told them to go!

It worked out great!  I was able to walk around the room, helping the students who needed it while allowing the more independent students to be on their own.  I wasn't constantly waiting for kids to stop talking so I could answer questions.  Students also discovered that since there was only one of me and many of them, that they could ask each other for help and that was alright.

When they DID ask me, I made them explain what they were doing and how they got their answers.  I didn't tell them yes or no.  I simply asked them questions.

At one point, a group of girls put their whiteboard on the floor and were working on their problem there.  When they asked for my help, I laid down on the floor with them (so gross! I have no idea when the last time the carpets were cleaned) and talked with them.

As colleagues of mine from Minnesota can attest, the floor is the best place to do math!
When students ask me questions, I try very hard to get to their physical level or below.  I think it signals that I value what they are saying and that I am engaged in the conversation, instead of keeping an eye out for other people who need help.  While lying on the floor, one girl was lying in the same position, but the other was sitting, which put me lower than they were, forcing me to look up at them.

My theory may be unfounded, but I seem to have success with it.

I asked the question "Why, when we multiply a number by itself, do we call it 'squaring'?"

A brief discussion culminated in this.  They all had lights of understanding go on and I hope they stay on. 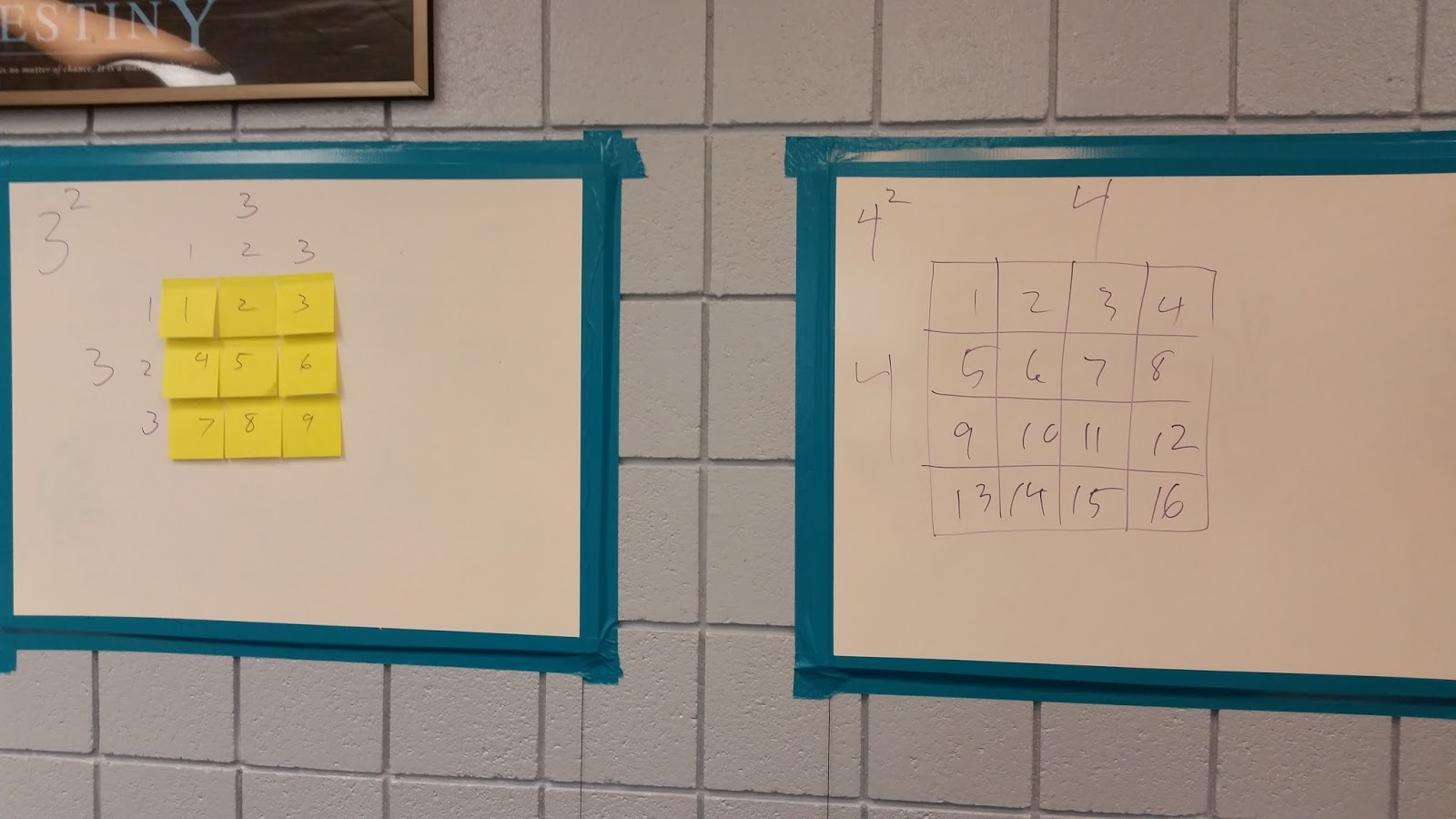 The other thing I did was to give them stickers.  I know that Julie and several others do this, so I thought I would try it out.  Each student was given a green, yellow and red sticker.  They were told that, once they completed the assignment, they were to attach the sticker that corresponded to their confidence level.  If they thought it was super easy, the should put a green sticker on the paper, yellow if they ad a bit of trouble, and red if they were totally lost.

These were the results of the first class. 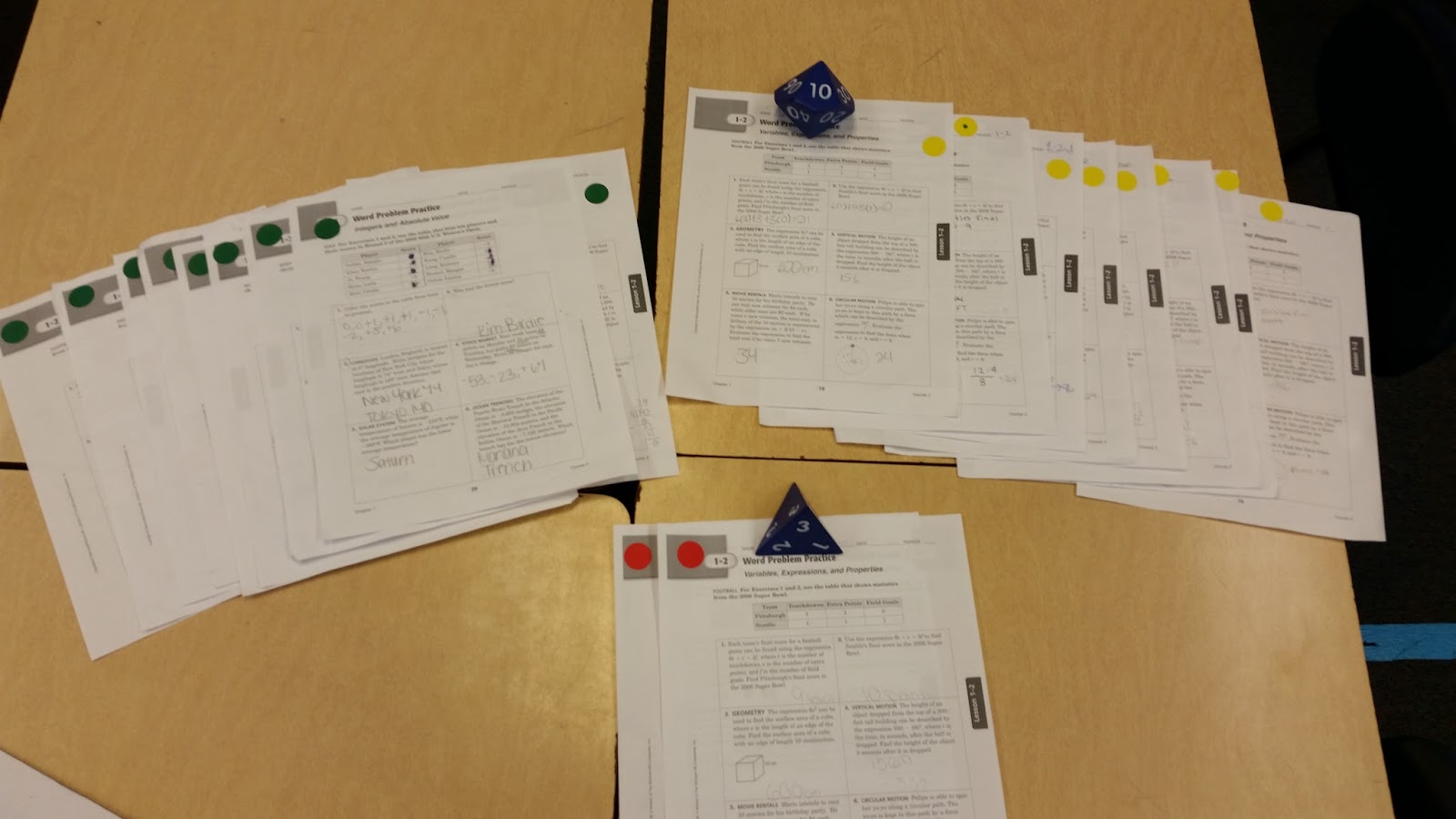 After looking at the answers they put down, I was distressed at the number of kids who put green stickers on papers that were completely wrong.  Tomorrow, when I hand these back, we will have a discussion about the stickers and why they chose the sticker that they did.  I'm curious to see if it's because they really understood the concepts, or if they just rushed through.

I know it's early in the year and they are out of the habit of doing things like "reading the question" and "checking their answers."  I know it's going to take time to bring them back into the fold of learning, but I'm always depressed at how far behind my students seem after a summer away from learning.

One of the most frustrating parts of teaching for me is the starting over.  I feel as though I made so much progress with last years students in terms of academics, behavioral expectations and progress of critical thinking skills.  Then, to start all over with a fresh group, it's very difficult not to think, or say, "I ALREADY WENT OVER THIS!!"

Even though I DID go over it, it was with a different group of students.

I wonder what it would be like to travel with a class.  Start with them in 7th or 8th grade and stay with them until they graduate, moving up as they do.  I love getting to know new kids, but I think about the amazing progress that could be made if I didn't have to spend time every year by going over and reinforcing my expectations.

If, on day one, all of my students already knew what to expect from me, what we might accomplish, even if I had the same class for only 2 years.  I wonder how many of my students would willingly stay in my class for multiple years if I moved content with them.

Then the other side pops in.  What if I would be traveling for 6 years with a class that didn't work for me.  How quickly would I start to hate every moment of it, instead of trying to find a way to make it better.


Geometry focused on problem solving today.  Due to their inability to not talk over me as I was trying to explain directions, I assigned groups.  As I anticipated from the quality of work on the puzzle yesterday, most of them were unable to solve the homework.  That meant whiteboards again!  They worked very well in their new groups. 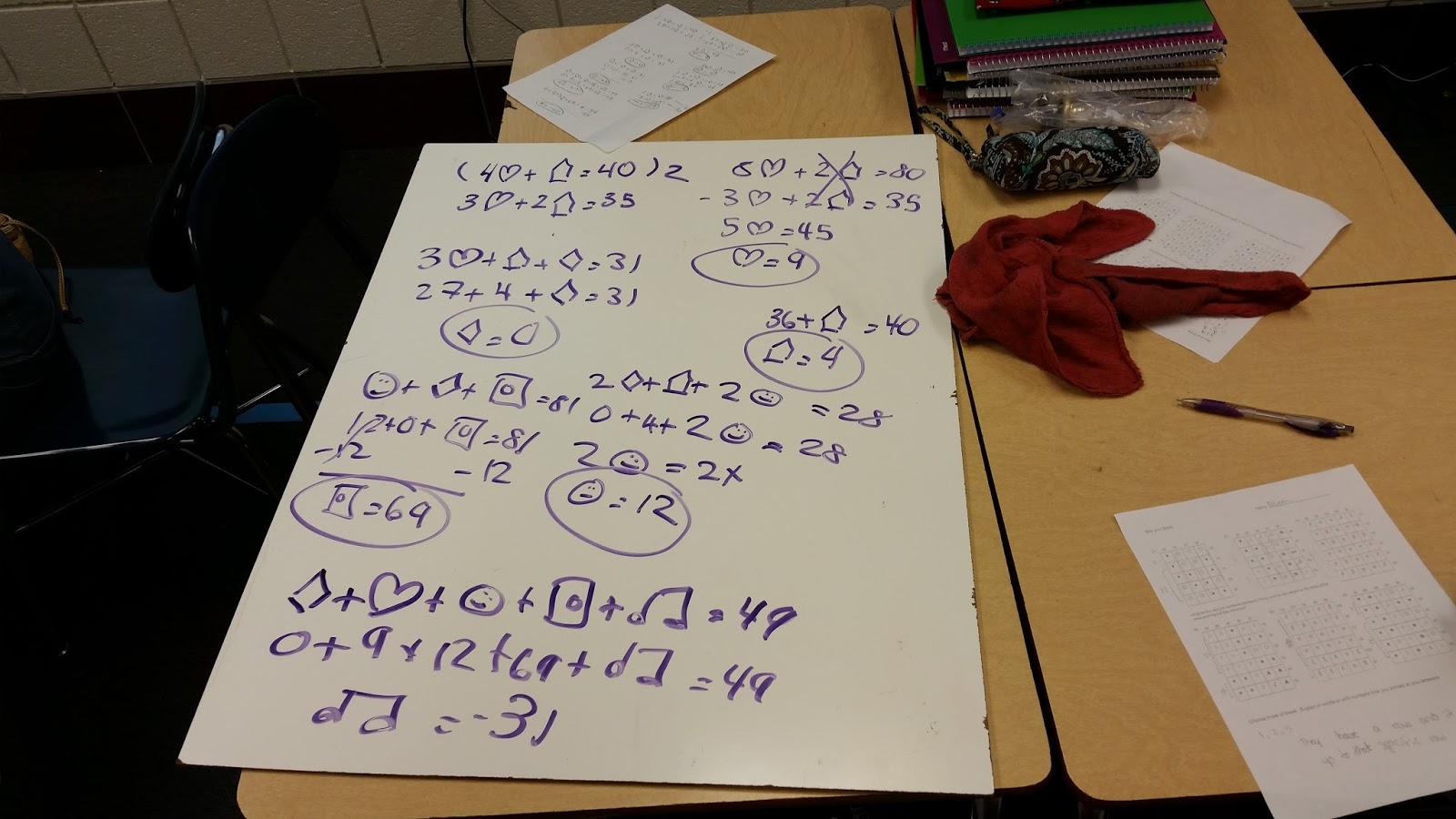 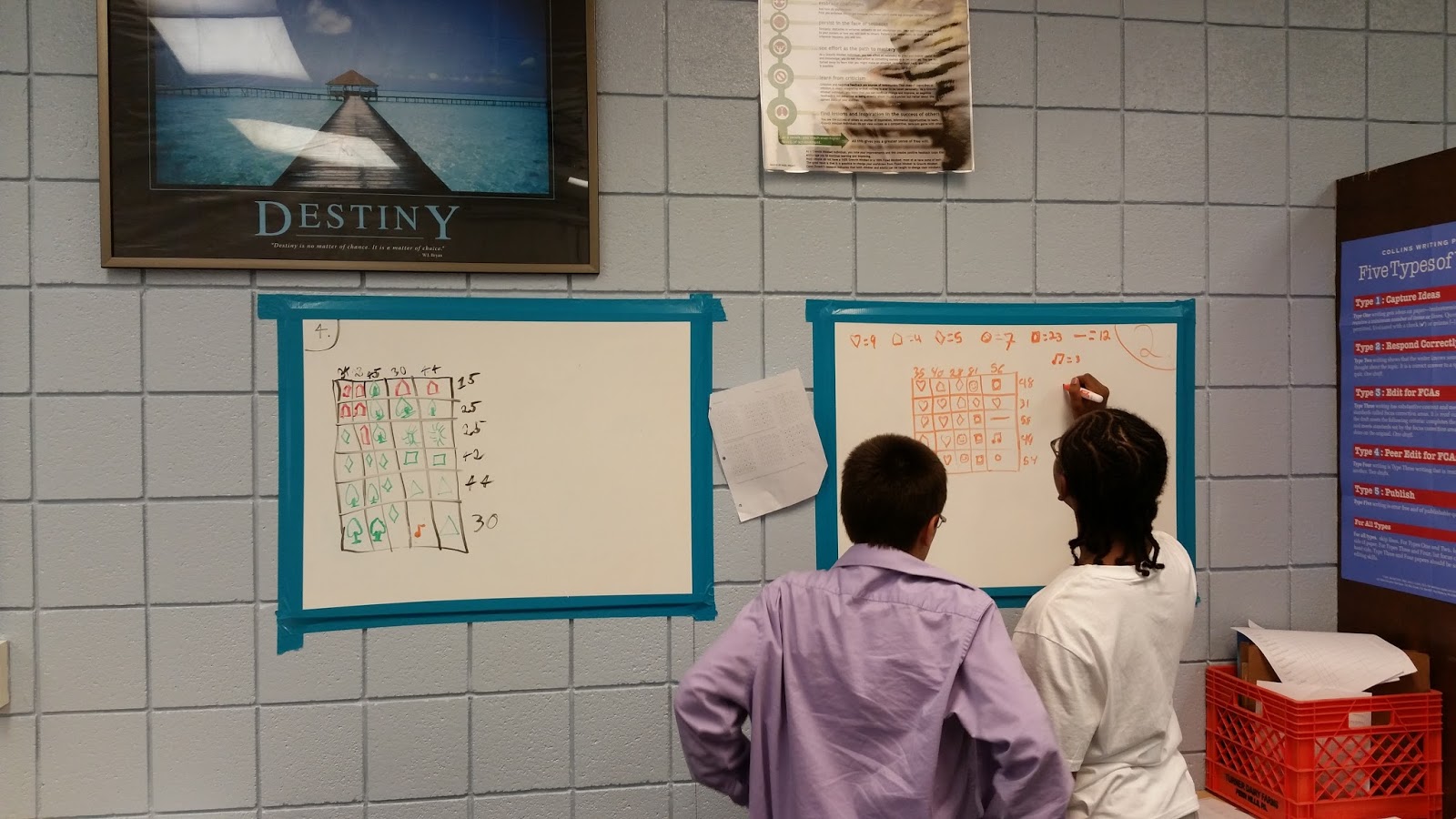 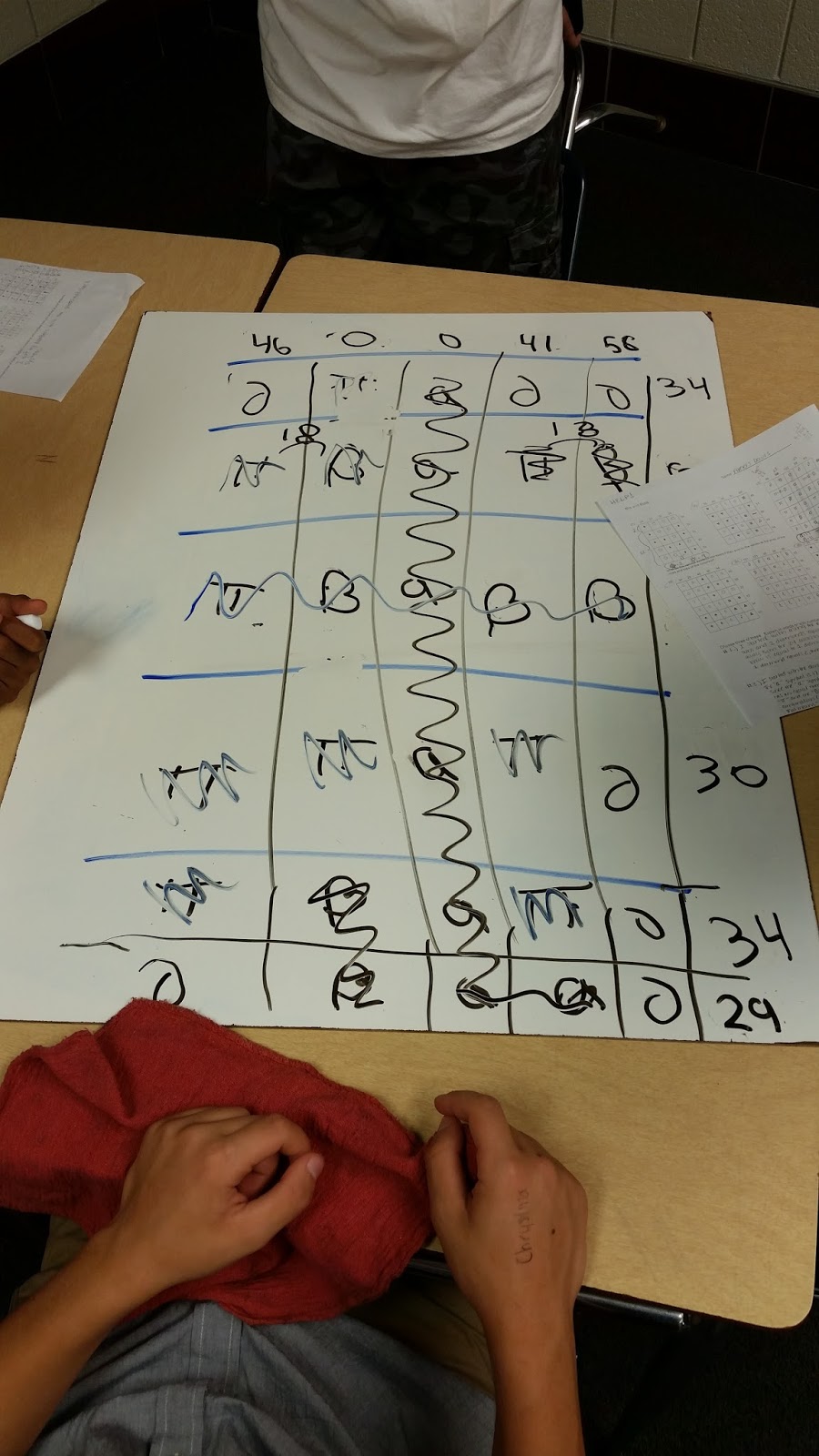 We had a discussion about the nature of learning that was sparked by a student complaining that the puzzle made her head hurt.

She said that she goes to the gym and does squats.  I asked what it meant when her legs hurt while she was squatting.
Her: "It means I'm building muscles."
Me: "When your head hurts in here, that means the same thing about your brain. You're building your muscles.  I want you to leave my class every day with a bit of a headache."


My own headache comes from getting my pre-algebra students to move beyond "I don't get it" to asking a specific question.

Again, the class at the end of the day was much less productive.  I'm wondering if this will change when the room is no longer in the 80's, or if this is a direct result of those students being in school for 7 hours without any significant break.

I would kill to have recess back...
Email ThisBlogThis!Share to TwitterShare to FacebookShare to Pinterest