Posted by Justin at 4:18 PM
I don't seem to have enough graded assignments to satisfy anyone.

I worry that to many people, the phrase "how is my child doing?" translates to "what is her/his grade?"  I think those are separate things.  I could argue that a student with a B is doing VERY poorly while one with a D is doing very well.

In any event, trying to work within our current system means that I need more grades.  So pre-algebra had a quiz today.

Since we have double periods, I spent the first period going over homework and answering any questions that they were willing to ask.  In the second period, we had the quiz.  There were 15 questions on addition, subtraction, multiplication and division of fractions.

I asked them, when they were finished, to write at the top of the page how well they think they did.

The majority of the students thought they earned a C or below.  Only one student wrote that she felt she earned an A.  Tomorrow, we are going to have a talk (and I'm going to take their papers home) and write about why they felt they had earned that grade, how true it was to reality and what they could do in the future to improve both their grade and their perception of how they performed.

They did not do as well as I would have hoped.  Very few passing grades and most of them are either careless errors, or using the wrong procedures at the wrong times.  It's very hard not to think that the last two weeks were a total waste of time and effort.

In geometry, we finished the last trial of The Lady and The Tiger.  I think when I do this again, I'll change it to a pot of gold to make it less sexist. 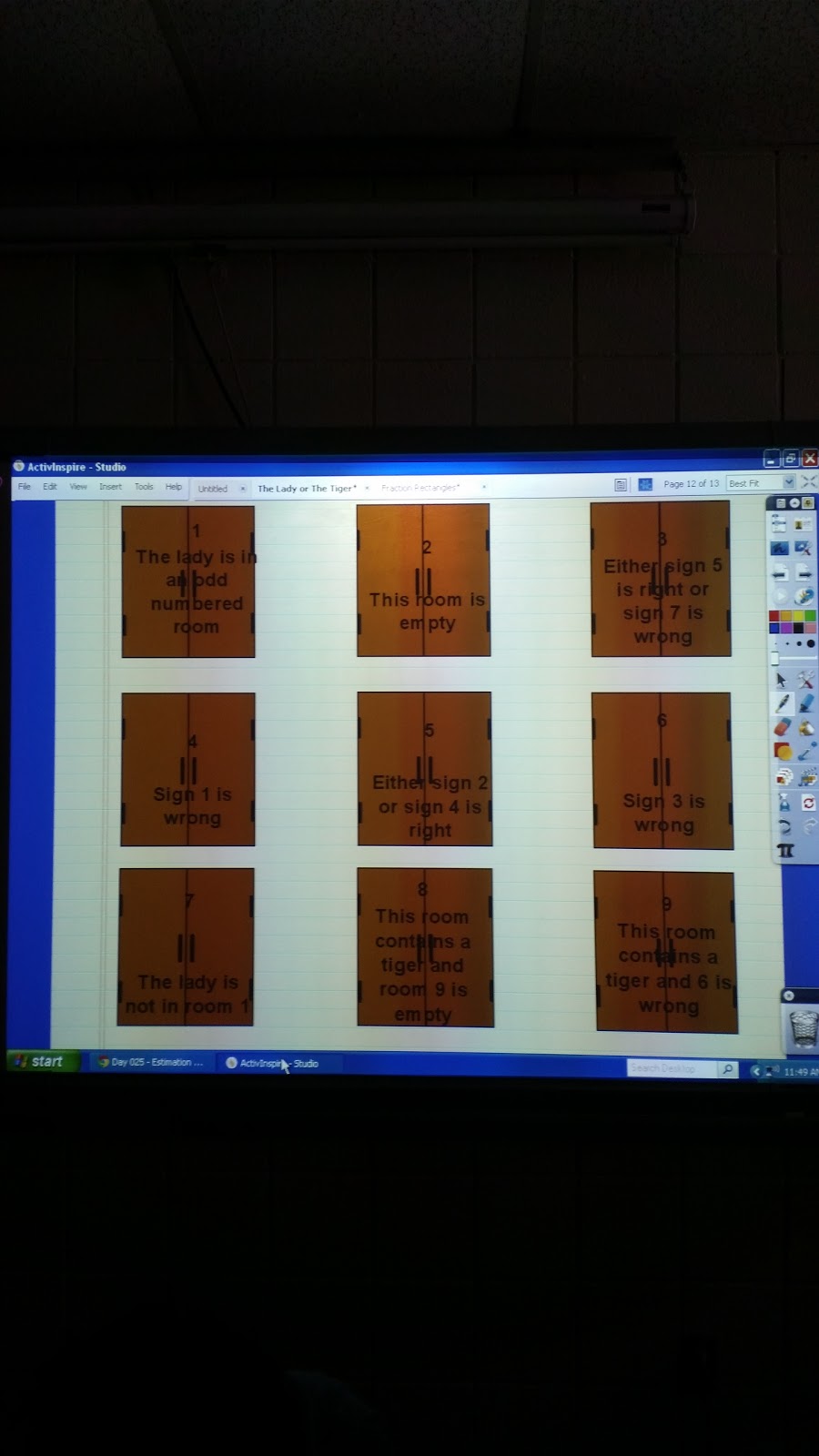 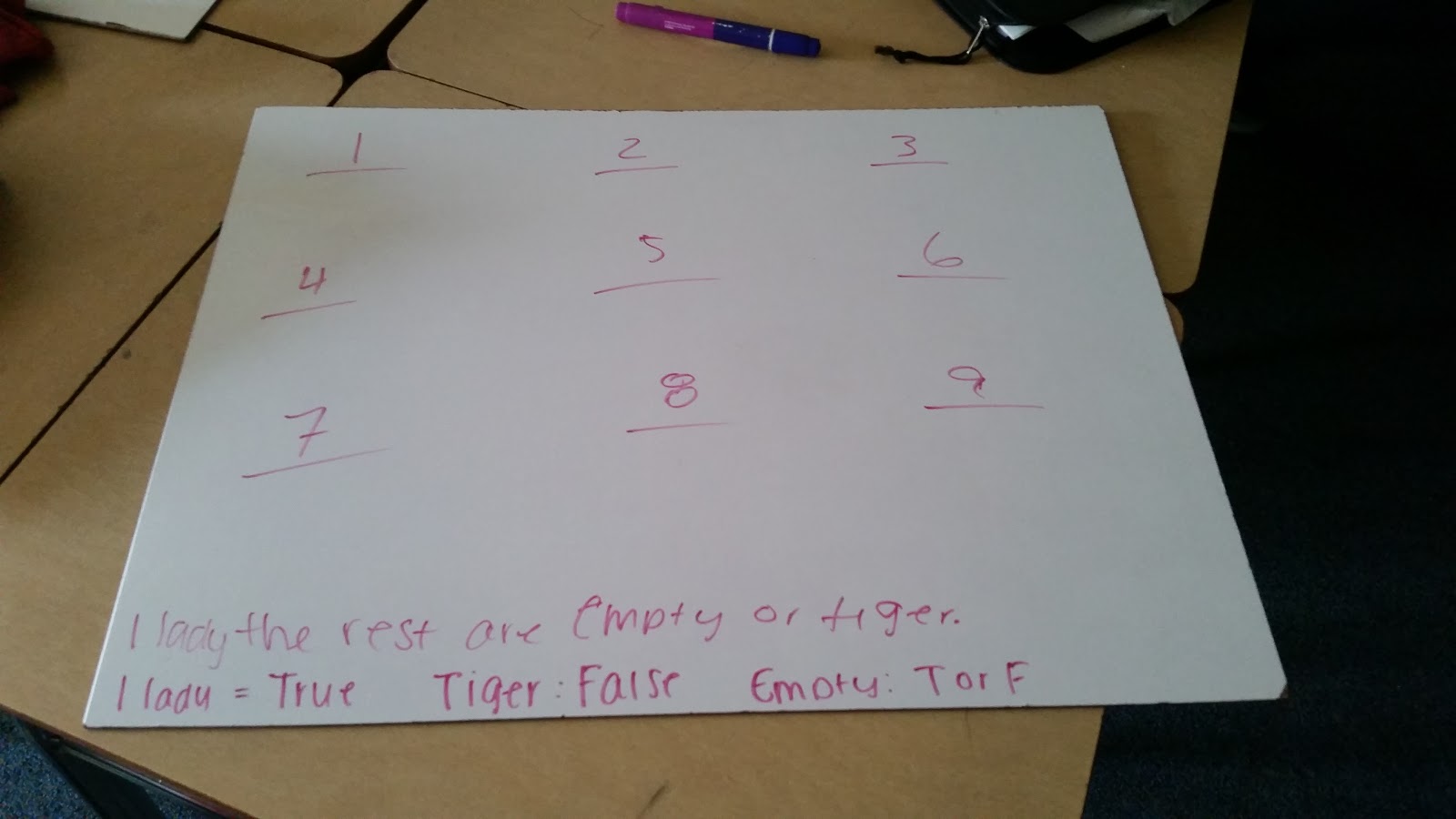 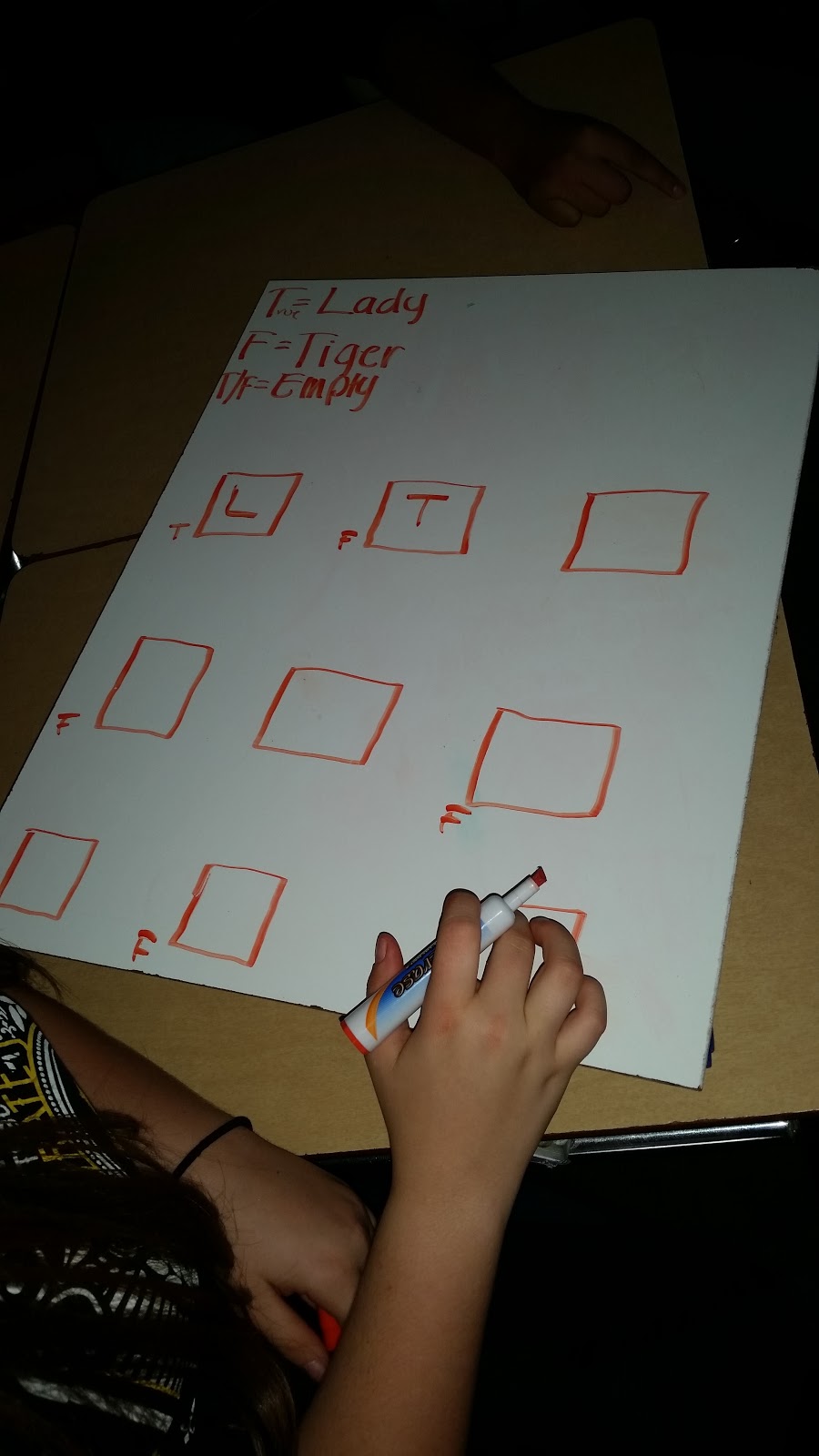 As this activity has progressed and we have talked about good reasoning versus faulty, I've been increasingly impressed with their logic.  Today was, by far, the most difficult puzzle.  They worked VERY hard and good reasoning, but all got eaten.

Afterwards, we looked at the scoreboard and I jokingly told the winning group that they were good, but everyone else failed for the year.

And two of my students LOST THEIR MINDS!

They began screaming about how they were going to go to the school board, etc. etc.

The rest of the class told them to calm down, that it was just a joke, but they were well into hysterics.

I have many feelings about this particular situation, but I don't have any idea how to sort them.  What I DO know is that these two have been complaining about my class to anyone who will listen.  The set of "anyone who will listen" does not include the majority of my students, so I'm not concerned about that.

I'm more concerned about how I can help those two students.  I believe in the efficacy of my methods and I truly believe that, if given the chance, these two students would greatly benefit from the critical thinking and logical reasoning that I'm trying to promote.

I need to find a way to reach them and get them to give it a chance: to stop worrying about their grades and being more concerned about the learning.

An assignment about following directions was met with "Oh my god! This is so stressful."

I'm not sure how to break through...
Email ThisBlogThis!Share to TwitterShare to FacebookShare to Pinterest