Day 6: That Nerd Flag and Feedback

Posted by Justin at 4:32 PM
There is one teacher other than myself who teaches pre-algebra.  This other teacher was given specific instructions about what he needed to teach in terms of curriculum, content and timelines.

I was given that same information as a suggestion.  I'm not sure what to make of that, but he and I are working on keeping the kids on the same page, regardless of teacher.  He, according to the module that he was given, skipped over the basics of addition and subtraction.

To be honest, I'm relieved by this because it gives me a pass to do the same.  I HATE starting the year by re-teaching addition and subtraction of integers.  I think it sets a terrible precident.

It also wastes an insane amount of time.

Instead, I'm taking the advice of countless brilliant educators and simply incorporating those skills into my tasks.

On Friday, we talked about 4 steps to solve problems and their homework was 10 problems, fairly simple, but they were expected to use those steps.  When they came in this morning, after our Estimation 180 warm-up, I handed out dry-erase board and assigned a problem to each group.  They were asked to use the four steps to solve the problem and be ready to present their findings and methods to the class.

I REALLY liked the activity because it got them writing, thinking and working as a group, but I think I gave too much time for the work.  They had, in theory, completed the problems for homework, so it should have been a simple matter to translate those problems to the whiteboards for presentation.  The fault was mine and I need to be better about setting specific times for each task.

The other issue was that students were a bit rude to each other.  There was talking over other groups and, period 1 in particular, has several very soft-spoken students.  I need to work with them more about manners during presentations.

Other than constantly saying "please stop talking, you are being rude" I'm not sure how to convey this.

I call on random students to restate what was just said, and I ask students to please stop talking.  I use proximity and light shoulder touches to get attention, but it doesn't seem to be enough.

I don't sense any intentional rudeness.  It's more a typical 13-year-old attitude of "I'm not interrupting and it's not my turn yet." 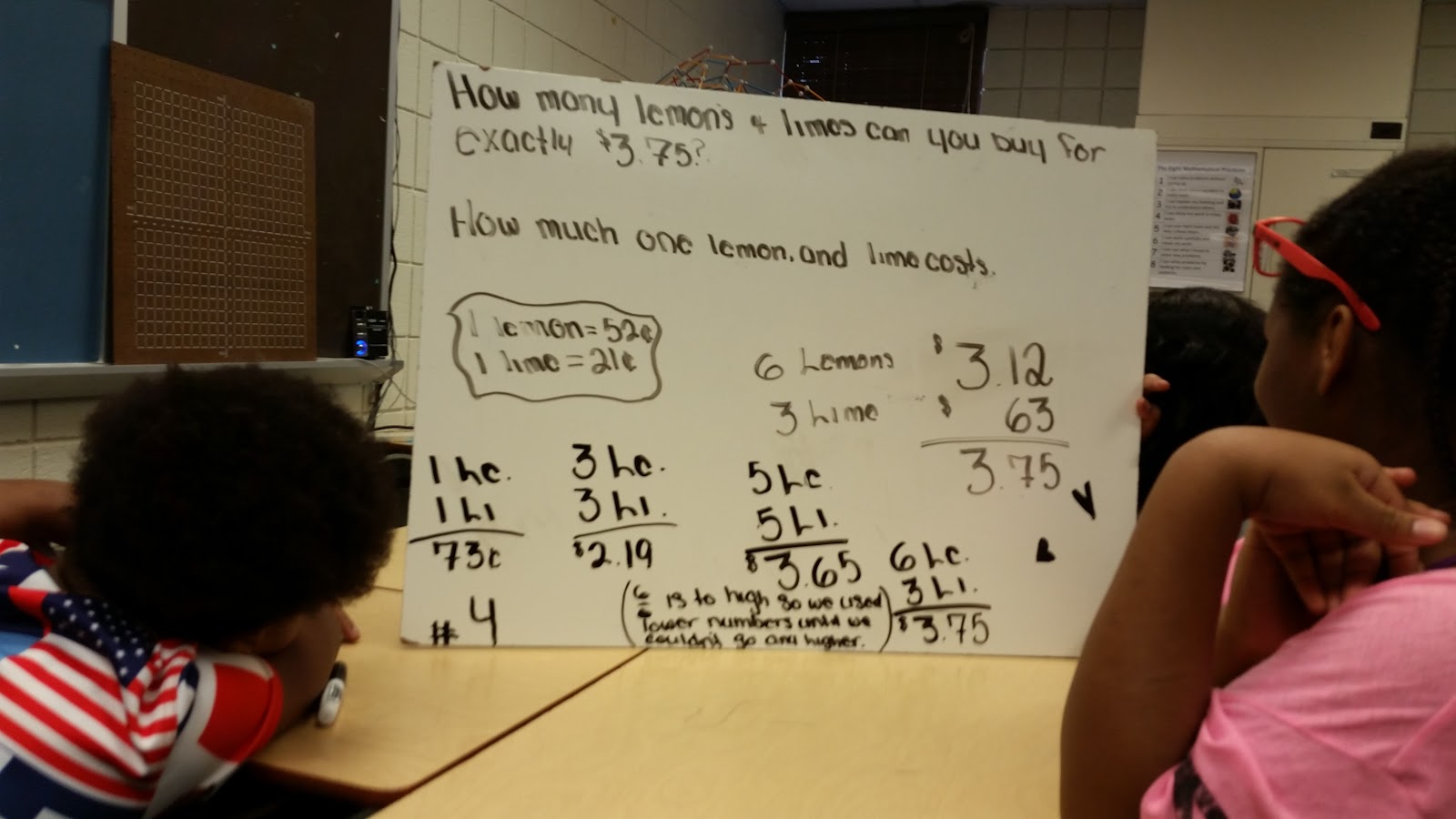 This is something that I need to work on.

In the second half of the class, we played a game with integrated subtraction, probability and strategy. This weekend, @VeganMathBeagle pointed me in the direction of this great NRich task!

Students were put in groups pairs (and one group of 3) and were given a 10-sided die.  The groups rolled the die once and had to choose where to place the number they rolled in a 4-digit number.  After both players had placed the digit where they wanted, they rolled the die again for a new number.  This process repeated until all digits are filled.  At that point, the student with the largest number wins the round.

In the demo round that I did with the students, we decided that the winner would get the number of points equal to the difference between their answer and their partners answer. 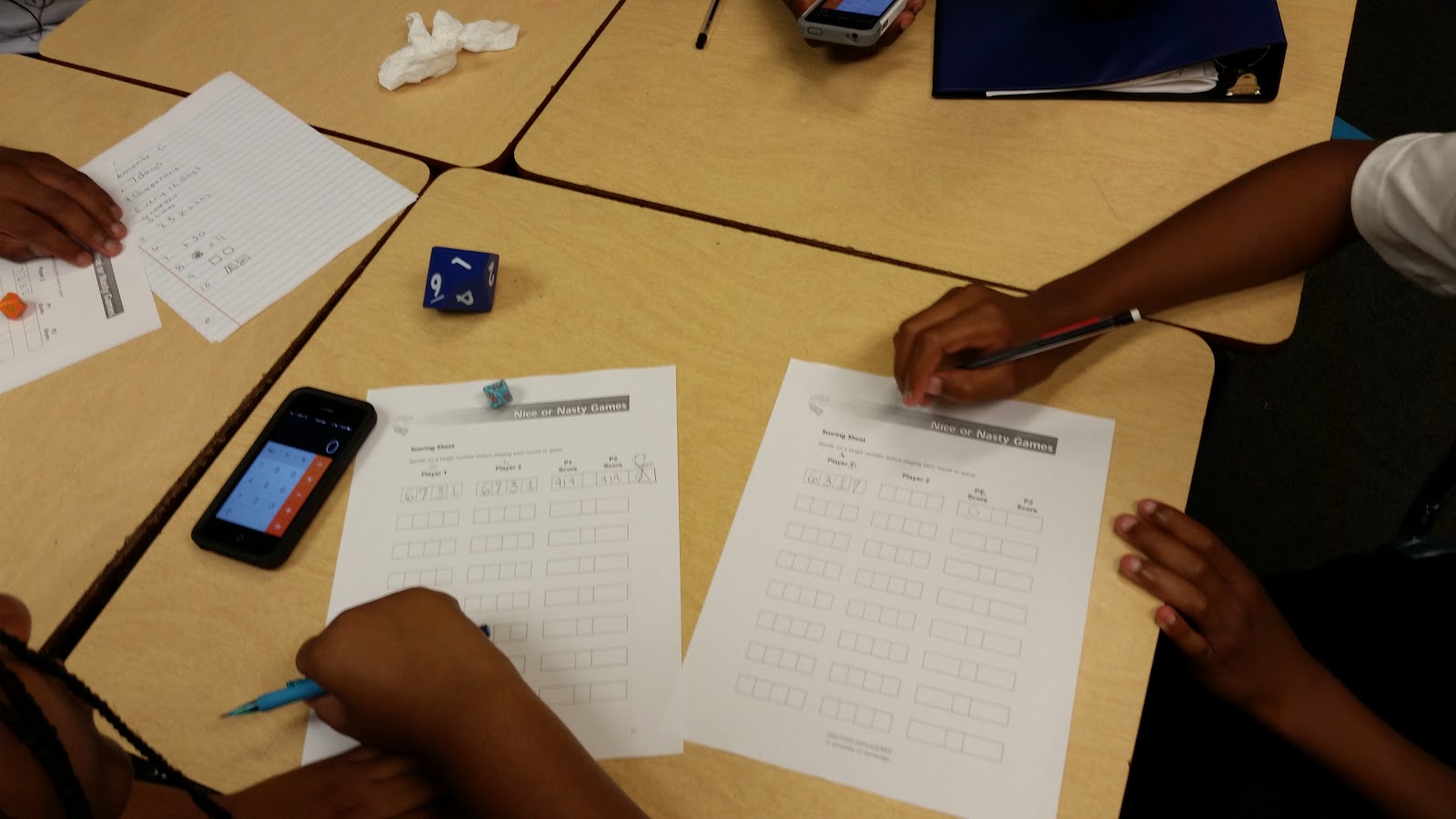 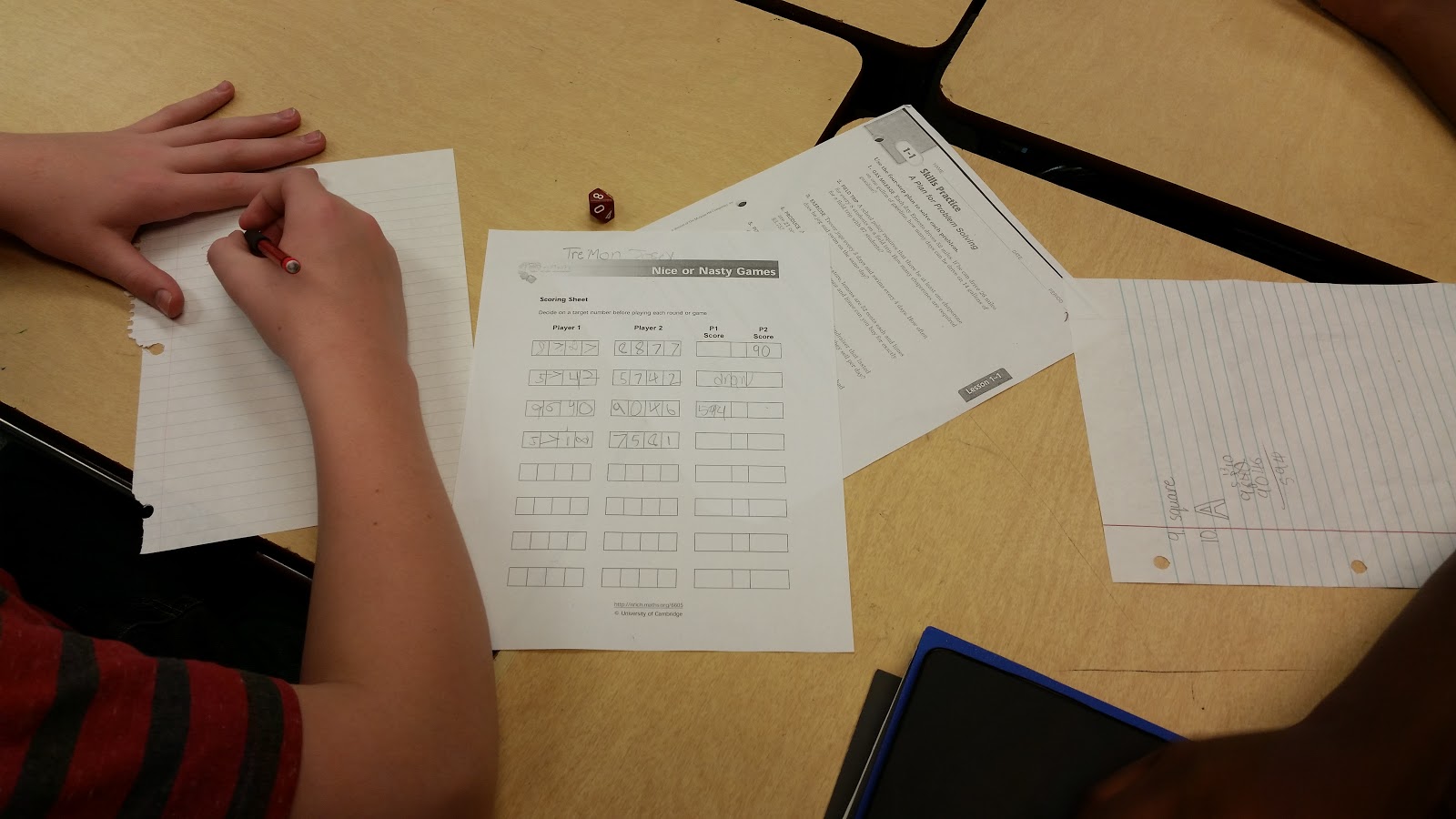 I love this activity for several reasons.  It has students using physical objects, which is great for kinesthetic learners.  It allows them to work at their own pace, with faster students getting to play more rounds, but not giving any sort of penalty for slower students.  There are several ways to modify the game, including building the smallest number or trying to get that is as close as possible to an arbitrary number. (Use the digits to get as close as possible to 5721)

It creates the opportunity to talk about strategies!

Me: "How did you decide where to put the numbers?"
S: "I tried to put the big ones in the front."
Me: "So if you rolled an 8 for your first digit, where would you put it?"
S: "In the first spot."
Me: "Can you tell me why?"
S: "The only number bigger is 9 and there are lots smaller, so I probably won't get a 9 to go in that first spot."
Me: "What if you rolled a 6 for the first digit, where you would put it?"
S: "I'd put it in the second spot because there's a good chance that I could get a 7, 8 or 9 and that would make the number bigger."

These are great starter discussions to talk about probability and I want to remember to play this game again when we get to that point in the year.

The real reason that I love this activity is because it allows me to showcase my humble collection of d10's without the students knowing what a huge RPG nerd I am. 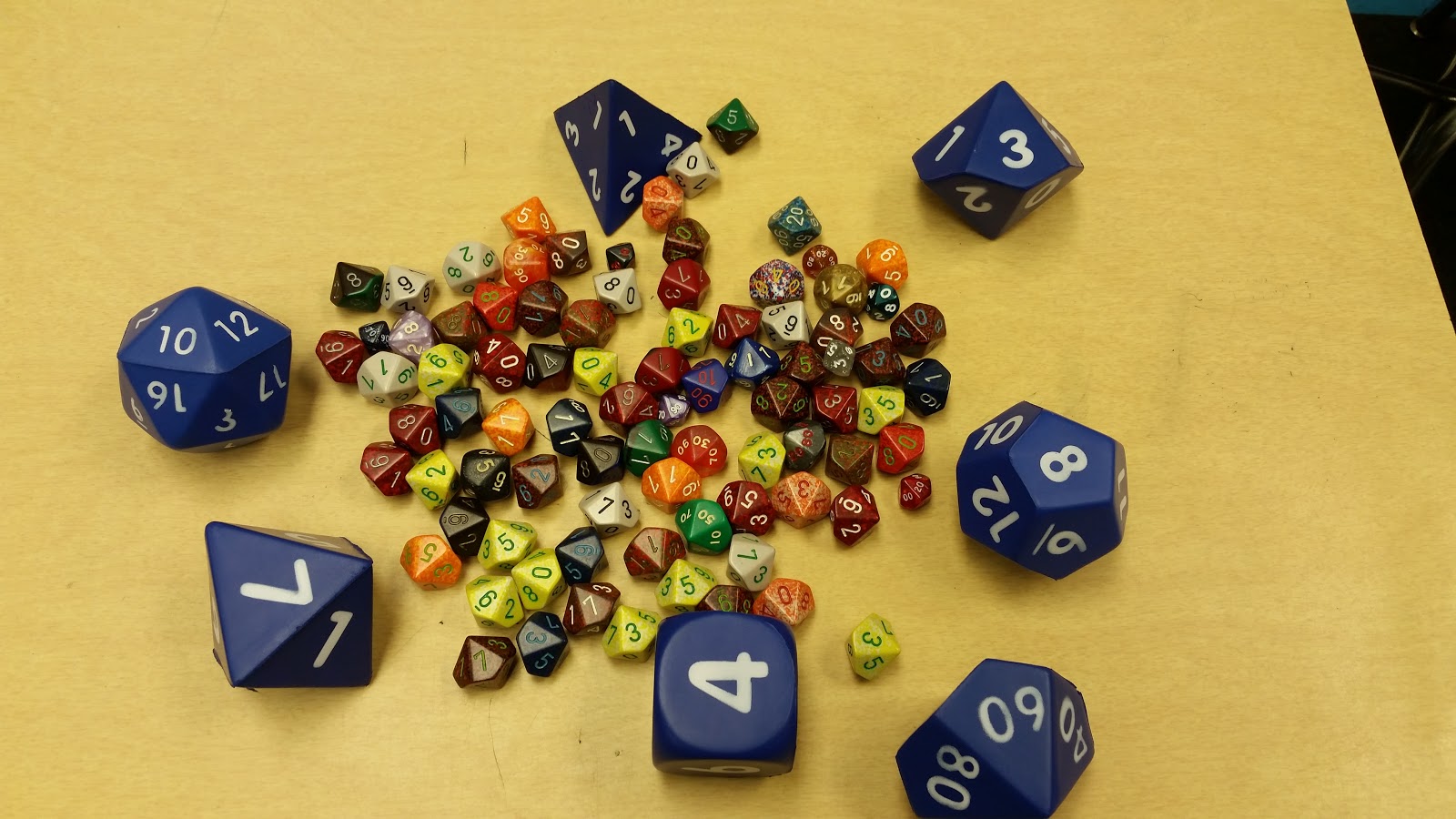 Today was the first time that we did this, so I only had them for a single period.  As a result, I quickly answered any questions that they had about the homework and then put a logic problem up on the board. 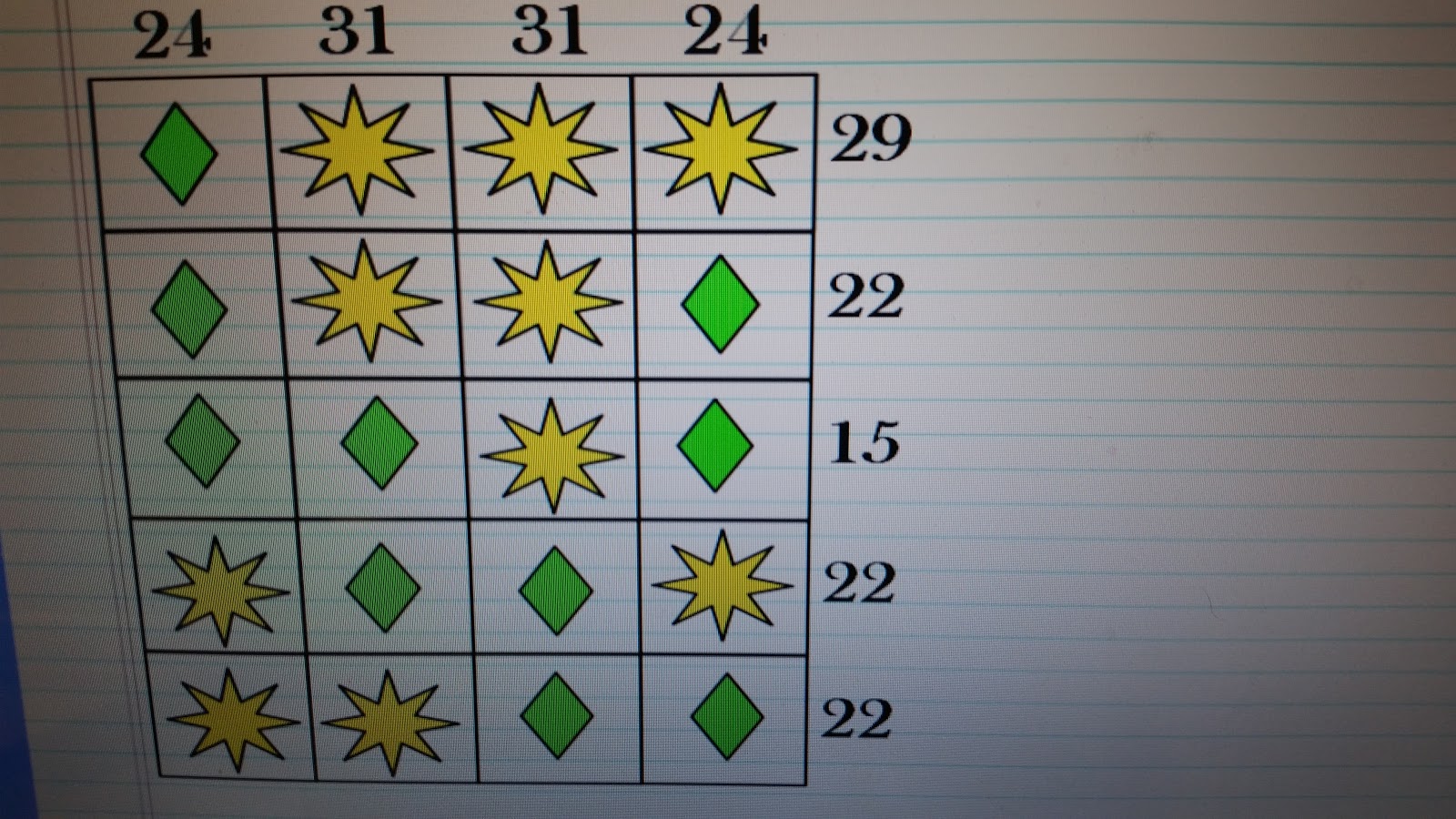 We spent a few minutes doing "I Notice, I Wonder" until one of my students wondered "I wonder how much each star is worth and how much each diamond is worth."

"That's a great thing to wonder about!  In your groups, see if you can find out."

After several minutes, I stopped them and we discussed.  I was disappointed to see that there were no methods used other than guess and check.  As a group, I prodded them to come up with better reasons and, just before the end of the class, someone came up with a great one.

I handed out 5 more logic problems.  Their assignment was to not only solve the puzzles, but to pick 3 and be able to explain their reasoning.  These problems are more complicated than the first one so guess and check will be a wildly inefficient method.  I'm curious how it will turn out.


I had been thinking about the impact of last year on my students. I know that we do what we can and hope for the best. 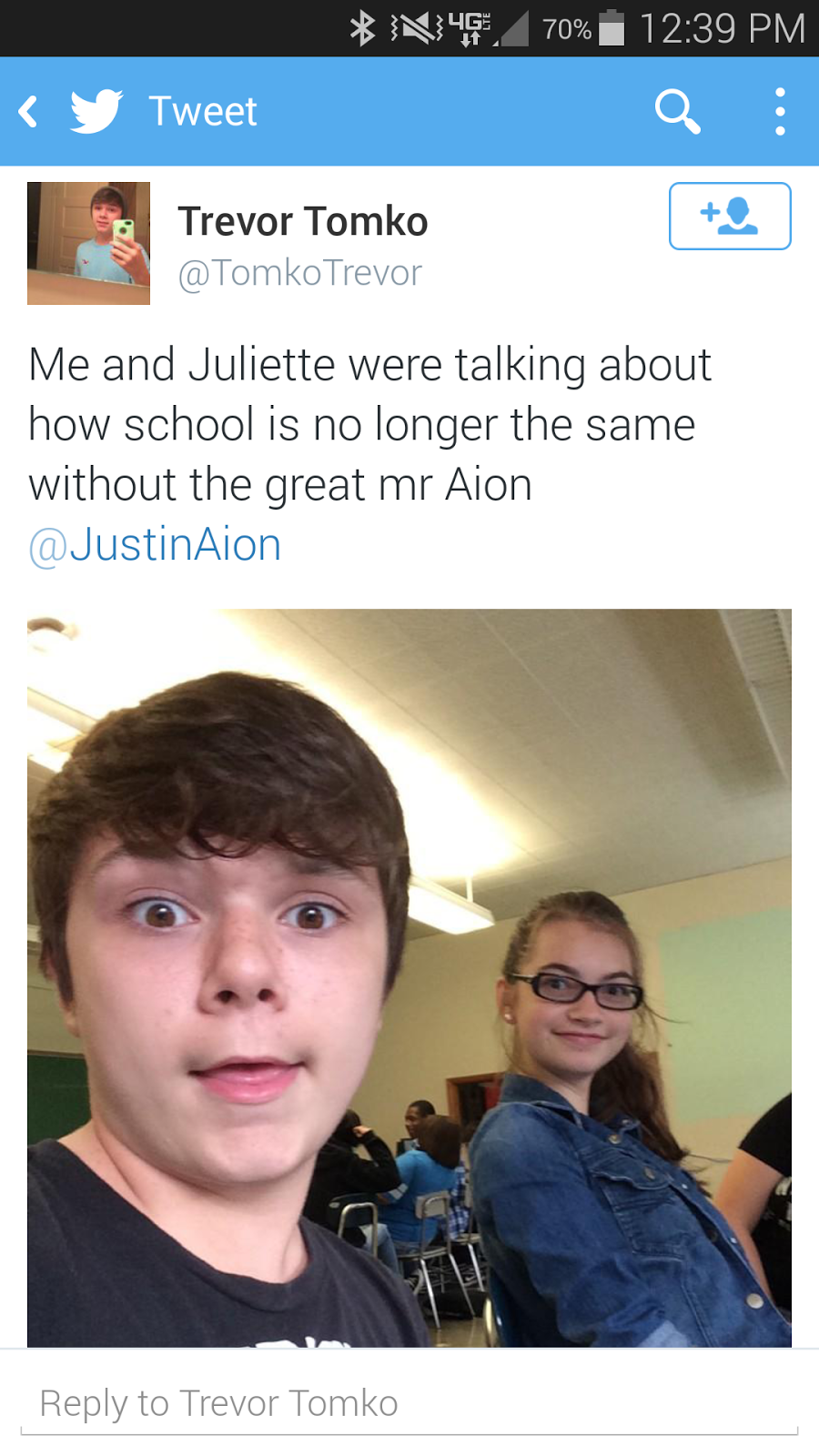 In the ensuing conversation, we talked about how each teacher has a different style and different things to offer.  I am glad that they miss me and I hope they can find success with their current and future teachers.


Second, a student from last year came to visit at the end of the day.  I was surprised to see her and I only just managed to stop myself from wrapping her up in a hug.  Since my room was 85 degrees again all day, I consider it a kindness to her that I restrained myself.

We talked about how her classes are going and I had almost exactly the same conversation with her as with Trevor.

It warmed my heart (metaphorically, since it was already physically warm enough) to hear from them.  I miss last year's class very much and I'm hoping that I can build relationships with my current students that are just as fulfilling.