Posted by Justin at 4:14 PM
This past week, I started having my students recite the 8 Standards of Mathematical Practice before we start each class.  I've been calling it the Pledge to Improved Mathematics because I don't have a better name yet.  My geometry students asked whether they should put their hands over their hearts, like they do for the Pledge of Allegiance.

After some discussion, it was decided that a more appropriate gesture would be to place their hands over their minds.

So my classes now begin with student placing their right hands on their heads and reading the 8 Standards of Mathematical Practice. 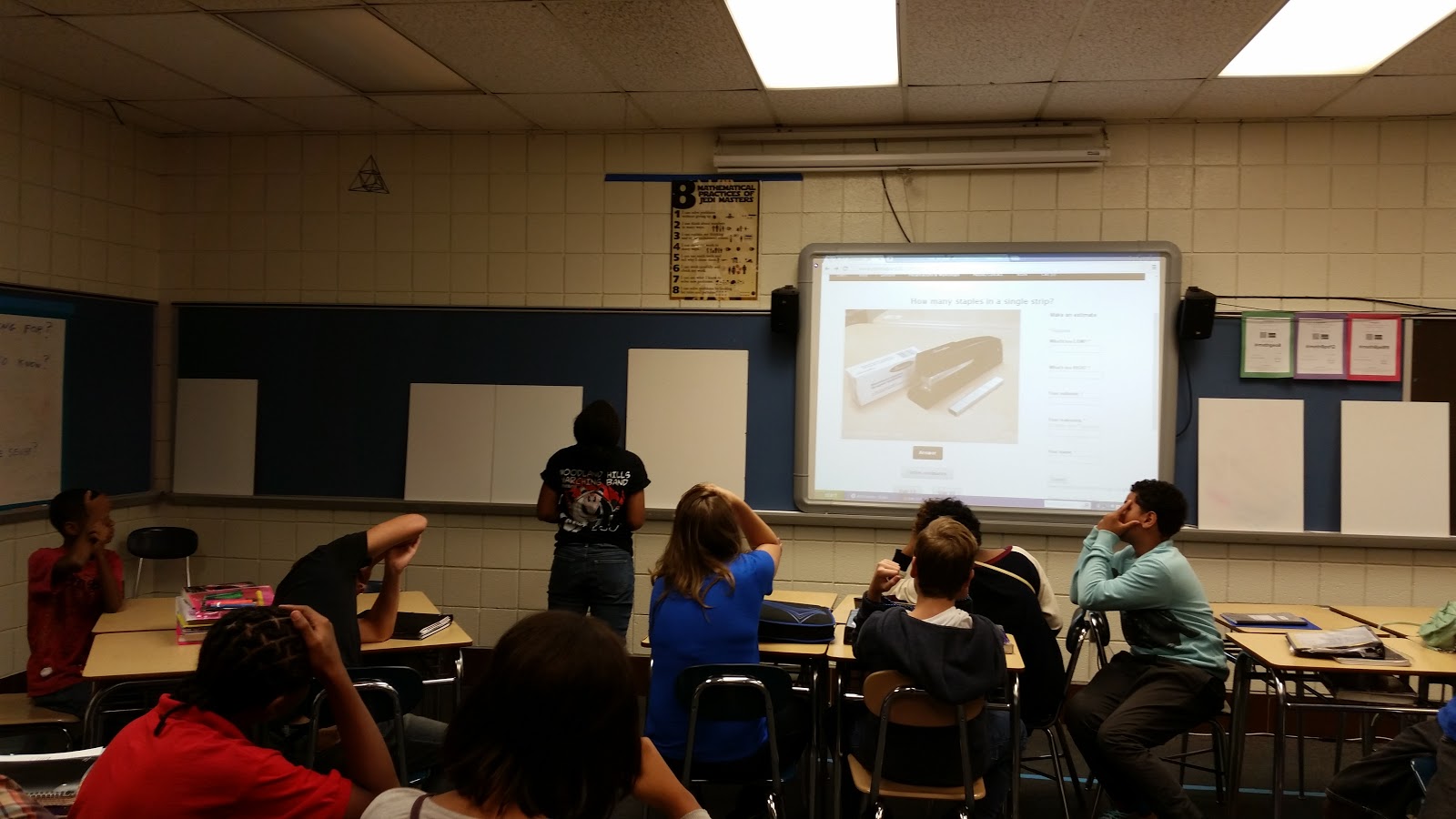 A student who came in late asked if she had missed the Pledge and was very disappointed when we said that she had.

The other thing that we've been doing at the beginning of class is #Estimation180, as we did last year.  This year, however, I've added a few new procedures.  Going off the four steps that I'm emphasizing in all of my classes, the conversation goes something like:

Me: "What's the first question we ask?"
Students: "'What am I looking for?'"
Me: "And what are we looking for?"
Ss: "The number of staples in a single strip."
Me: "What information might be helpful in order for us to make a good estimate?" (Emphasis added because I think this is an incredibly good question, if I may humbly say so.)
S: "How big the staples are."
S: "How long the strip is."
S: "How often the strip has to be replaced."
S: "How much it weighs."
Me: "Those sound like they would be very helpful in making good estimates.  What are your estimates for the number of staples in the strip?"


I realized also that I don't have nearly enough grades in my book to satisfy my administration, so we had a quiz in all 3 classes.

The pre-algebra classes took a simple version of a test from the text book.  It was 20 questions, multiple choice.  I have very mixed feelings about multiple choice tests because, traditionally, they only provide the students "right" and "wrong."  In an effort to incorporate more feedback, I decided that just because the test was multiple choice didn't mean that I couldn't use it to develop skills that I find important.

So the students took the tests.

While they were doing so, I handed out Plickers cards.  Plickers provide a unique QR code to each student that can be turned 4 different ways to indicate 4 different answers.  They are then scanned by a phone or tablet and the data is displayed in real time on the computer.  I found out about this program this past summer at TMC when the amazing Pam Wilson presented about how cool it is.  She was right!

Each student was assigned to a specific number and, once they had completed the test, we went over it.  I had them hold up their cards to indicate which answer they had chosen while the display showed who I had scanned and who I had missed.  The beauty of this was that no one knew what anyone else answered, but we were able to look at the data to see the distribution of answers.  As the graph started to display, I asked the students if they thought it was a problem that we needed to go over as a group.

They quickly picked up that if the majority of the class had selected the right answer, they could ask me about it individually if need be.

Answers were revealed, kids cheered for themselves or sounded disappointed.  I had them mark their own papers, keeping track of the ones they got right or wrong.  I did the same for problems that more than 20% of the class got wrong so we could discuss them together.

Their homework assignment for the weekend was to take the test home and, as we have been doing for almost 2 weeks now, take the ones they got wrong, correct them and write an explanation of what they did.  Doing so would give them the credit back for the ones they missed.


Quote of the day: "They didn't cheat! It's called 'Number 8,' son!"
SMPs are sinking in!
Email ThisBlogThis!Share to TwitterShare to FacebookShare to Pinterest