Posted by Justin at 3:07 PM
The pre-algebra class did a few more examples of adding and subtracting fractions using rectangles and then I unleashed them to work independently, or in groups as they saw fit.  I had written 5 fraction expressions on whiteboards around the room and gave each kid a half sheet of graph paper.  The task was to pick a problem, solve it showing all their work, then get it checked out.  If it was good, they were to tape their problem up on the board and get another sheet for another problem.  As I did yesterday, I sat at a desk and helped any students who came over.

It was quite clear that I'm not as good at explaining things as I had hoped.  In any event, I believe in the efficacy of this method and will continue having them practice it. 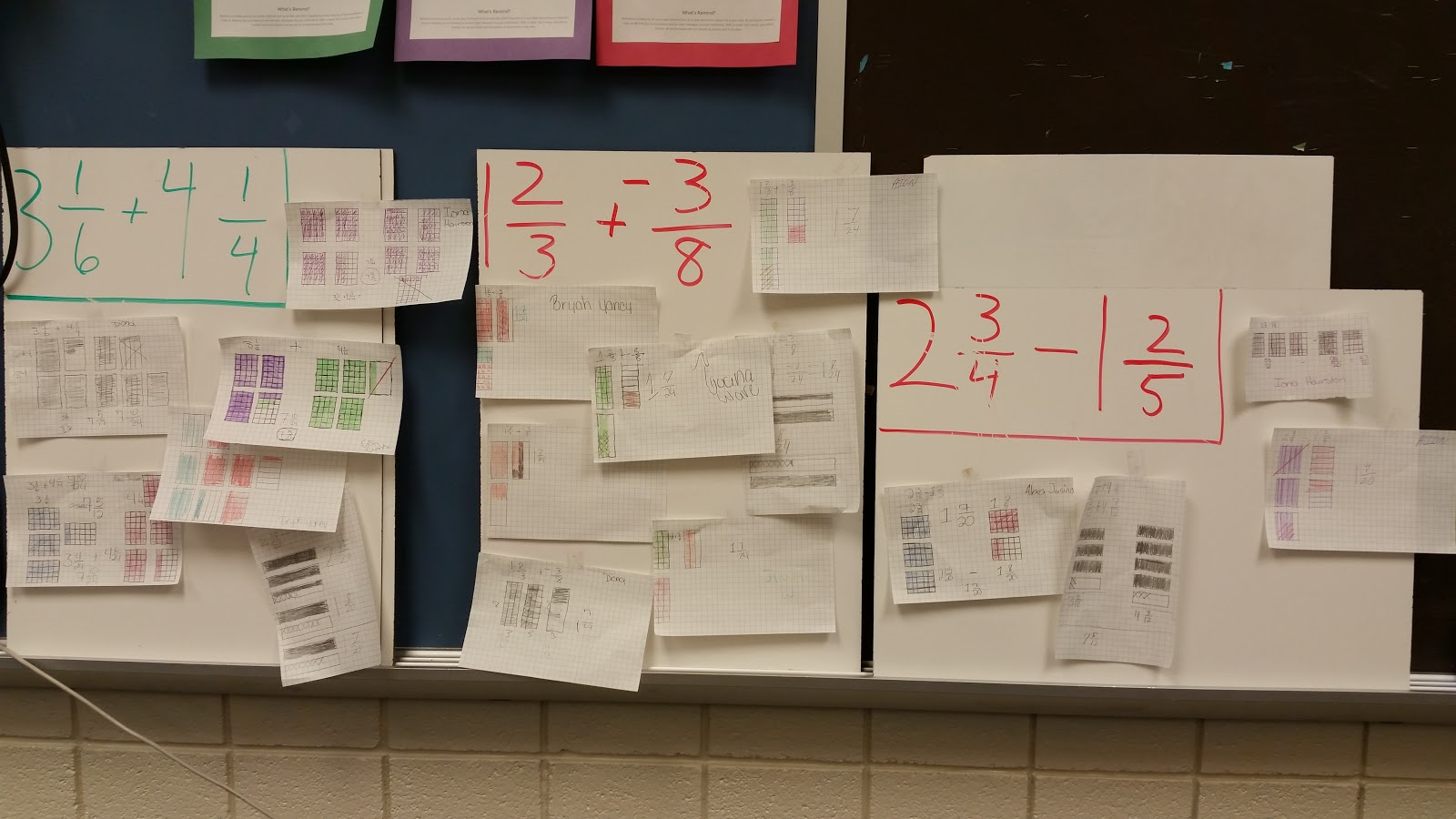 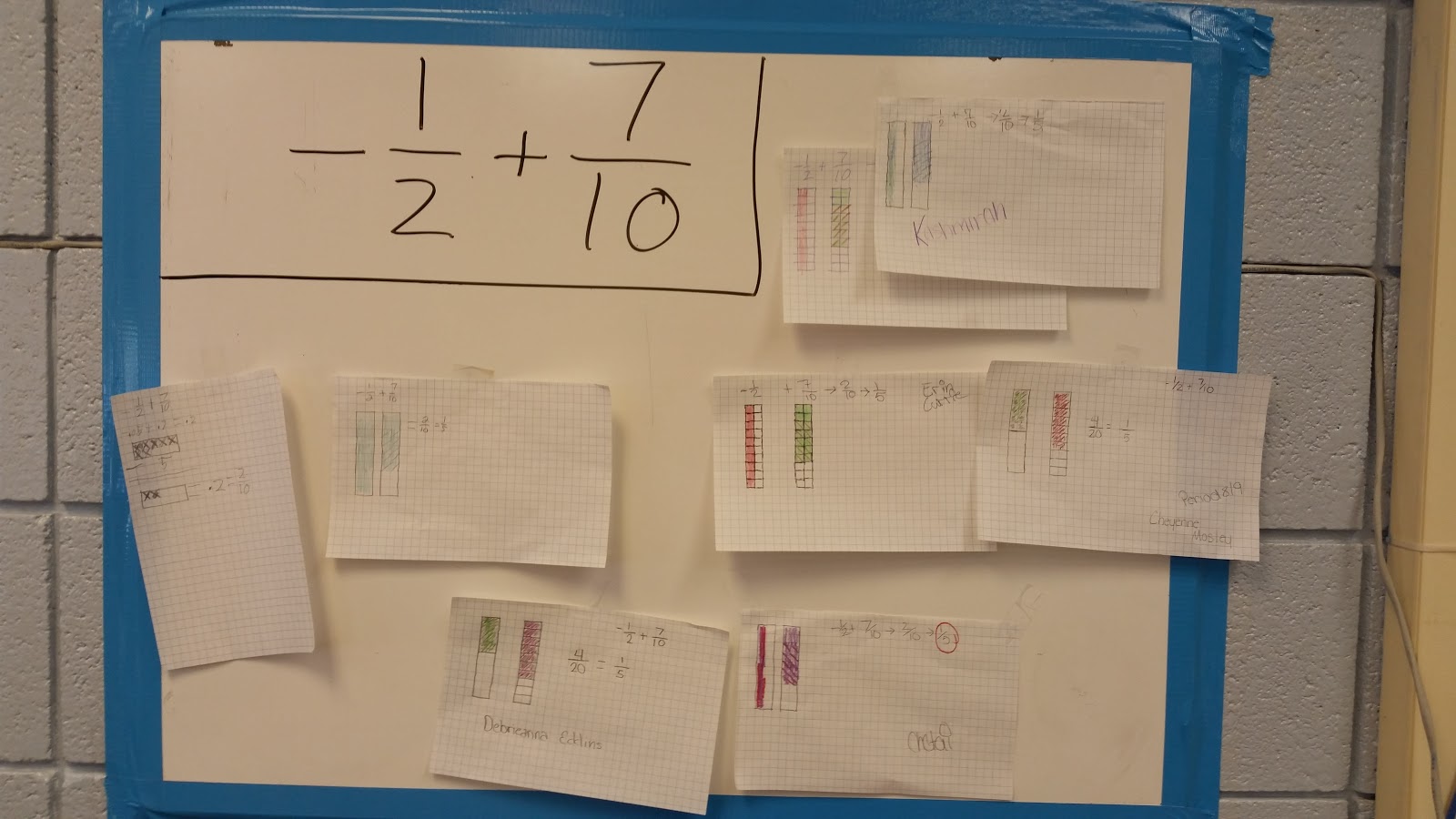 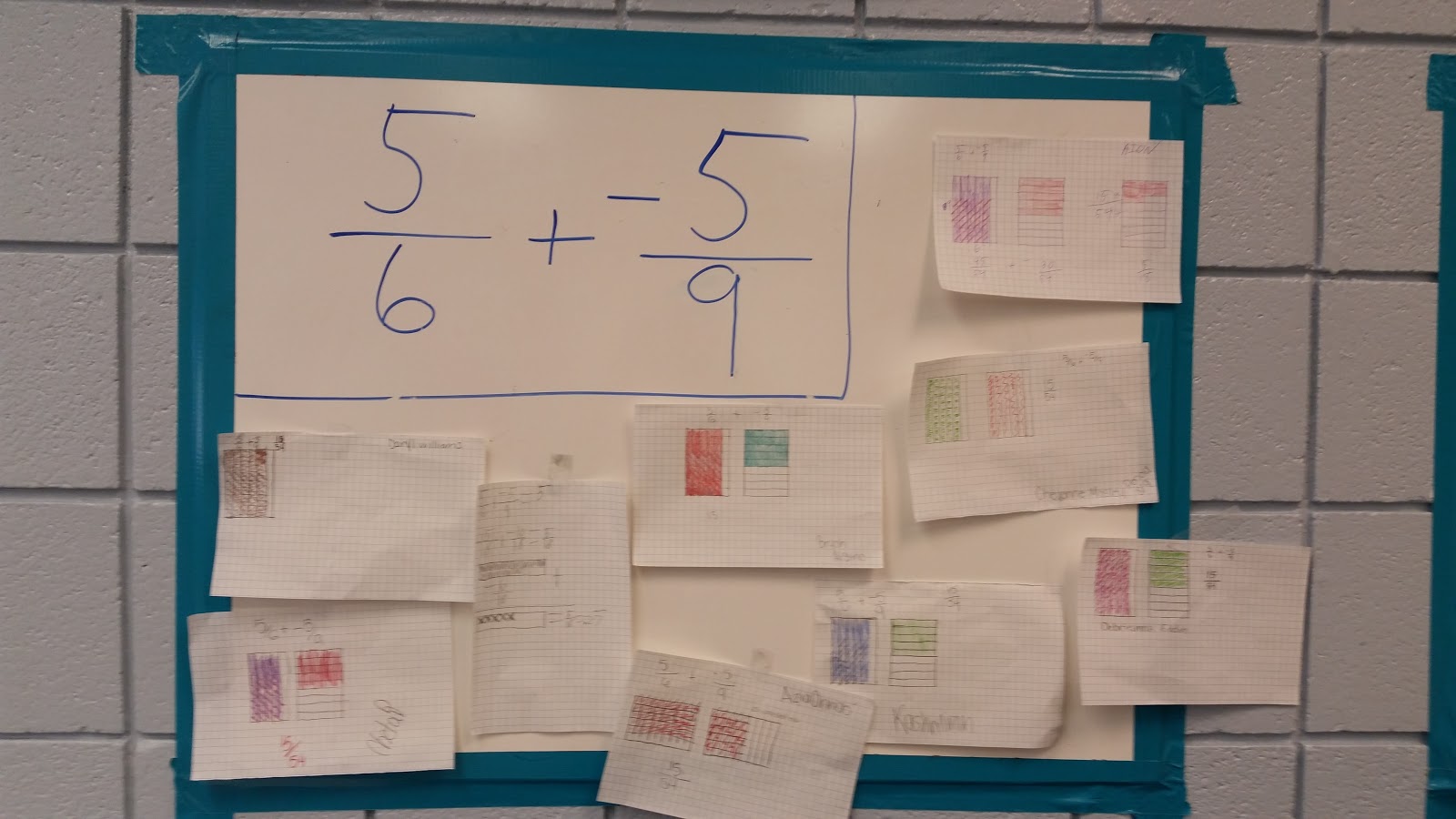 At lunch, our building behavior coach approached me about one of my students.  This young man has a history of discipline problems in the school.  When security goes around in the morning to collect kids to speak to the vice principal about behavior of the previous day, this kid is always snatched up.

For me, he excels! He works hard, he's polite, he asks good questions.  He plays around on his phone and he talks to people around him, but he does what I ask and he does it relatively well.  Once he leaves my class, however, his day goes downhill.

So I went to see him in In-School Suspension.

I knelt down by his desk and asked what he was doing.  He started telling me about other kids and I stopped him.  We talked about how he does so well for me and how proud I am of the stuff that happens in my class.  He's doing what he needs to do and doesn't let other stuff get in his way, so why does he when he leaves my room?

I may also be breaking through to some of the geometry students in terms of their priorities.  Their options today were to continue working in their notes, work on their recycles (revisions of last weeks test), start the chapter assessment that's due on Monday, or work on the mobile problems.  I told them from the beginning that the mobile problems were not for credit, but were a transition to the next chapter on logic and reasoning.

Several students, upon being reminded that they weren't getting points for the puzzles complained that they did them for nothing!

"Not for nothing. You did them to help hone your skills of logic and reasoning.  Those are infinitely more important than 'points.'"


I've been concerned that period 8 hasn't been grasping the concepts that I've been trying to teach and, as a result, have been acting up more and more.  Today, during our gallery walk activity, I was able to move between groups, helping them to work on the rectangles and discovered something interesting.

The class is having a little bit of difficulty, but the majority of the issues are stemming from a very small group who, when they have difficulty, throw things at everyone else and generally make the classroom as unproductive as possible.  I need a solution.

They are already separated around the room, but that means they just end up yelling louder and further.  I think I'll be rearranging seats this weekend and will put that group all together on one side of the room.

Overall, I'm still struggling with the same issues that I have in past years.  When I am sitting with, or talking to, a group of students, they are on the ball and doing great work.  As soon as I move away to work with another group, they stop working and start distracting others.  I feel as though I am constantly putting out fires and running back to stop kids from lighting more.


I'm glad it's the weekend.  I have many phone calls to make to try to get some kids back on track and still more to praise kids for their hard work.
Email ThisBlogThis!Share to TwitterShare to FacebookShare to Pinterest