Posted by Justin at 3:53 PM
I have had a toothache for about a week.  This afternoon is the earliest that I was able to schedule an appointment to get it fixed.  As a result, regardless of painkillers, I've been unable to get a good night's sleep.  This means that my resolve to fight my students' disruptive behavior has been minimal.  The results of this have been interesting.

Since my enthusiasm and energy have been low, the students have split into two very distinct groups; those who are taking advantage of my lack of engagement to use my class as social hour thinking I'm not noticing, and those who are now leaning forward in their seats, both figuratively and literally, to hear what I have to say.

What's even more interesting to me is that this latter group is primarily composed of the students with disabilities and their friends.  It occurs to me that with the "faster" students out of the way, I'm able to give the rest of the students the attention they need.  They write down what I ask and try problems on their own, knowing that I have the time and patience for them to move at their own pace.

I wish I could find a way to get those "faster" students to remain engaged.  I have yet to hit on a task or activity that will do so.  Their engagement seems to be random, or at least affected by things I have yet to identify.

The sad reality is that I'm not as good at differentiation as I would like to be.  I don't know how to make the diverse activities that my diverse learners require.  The best I've been able to do is to engage one group at a time, alternating based on days.


I've also been slack lately in having my students write about math.  The activity we did in geometry hit some of those points.

I handed out a sheet with three questions on them.  All three were about students making assertions about triangle congruence based on given information.  My students were instructed to determine if the statements made on the paper were true.  I told them to explain their reasoning however they could to make themselves understood.

I didn't let them write their names on the papers.

I wrote numbers.  Then I collected them.

Then I handed them back out to different students.

Part two of the activity was to have them critique the reasoning of others.  I gave them 7 minutes to read the answers and give feedback.  We talked about what is helpful feedback versus not.  We gave examples of both.  It boiled down to the question: If you received this feedback, would you find it helpful?

In part three, the critics gave the papers back to the original students.  Again, we talked about  what makes feedback valuable, useful and productive.  Then things got REALLY meta!

I asked the students to give feedback on the feedback.

Was the feedback helpful? In what way could it have been more so?  Did it leave you wondering what they liked or didn't like? 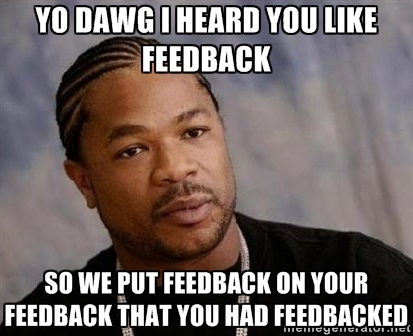 We had more of a discussion about the goals of the class and the differences between procedural and conceptual knowledge.

I'm still tired...  I need to get this tooth fixed.
Email ThisBlogThis!Share to TwitterShare to FacebookShare to Pinterest