Posted by Justin at 6:45 PM
As part of the Pennsylvania Teacher Evaluation Process, we have to set objectives for ourselves using a group of students that we select and markers that we choose.  We've been told that if we find ourselves falling short of the goals, we will be able to modify it later.

I selected the Geometry class and our section on similar triangles and proportions.  Today, they are getting the end of chapter test and we'll be using it as a pre-test.

I told them about it ahead of time because that group has a good amount of test anxiety and I didn't want them to freak.  My plan is to score the tests, but not put the grade in.  I want them focusing on the content rather than worrying about how a test for which they aren't prepared is going to drag their scores down.

I'm debating whether or not to even show them how they do until the end of the chapter.  I want them to see their growth, but I don't want them to fixate on the starting point.

I also sent out a Remind text to all of my students last night.

The Math 8 students also took a test today.  It was a 20-question, multiple choice test on functions, a topic we've been talking about for almost a month.  I don't always make my own tests, but I did this time.  I specifically picked questions that should have been familiar to my students.

The test did not go well.

On the bright side, of all of the students who attempted the assessment, everyone did better than they would have if they guessed.

I am, however, very disappointed in the lack of identification of reasonable answers.  Too many of the problems were ones where they could have plugged in all 4 answers and seen which worked.

The strategies that I've been emphasizing in class (problem solving, checking work, estimation, etc.) mostly seem to go out the window when it comes time for assessments.  This is true in all of my classes.

There are, of course, some pretty wonderful exceptions to this.  There were several students who used the white space on their tests to recreate strategies that we talked about, and I'm very pleased about that. 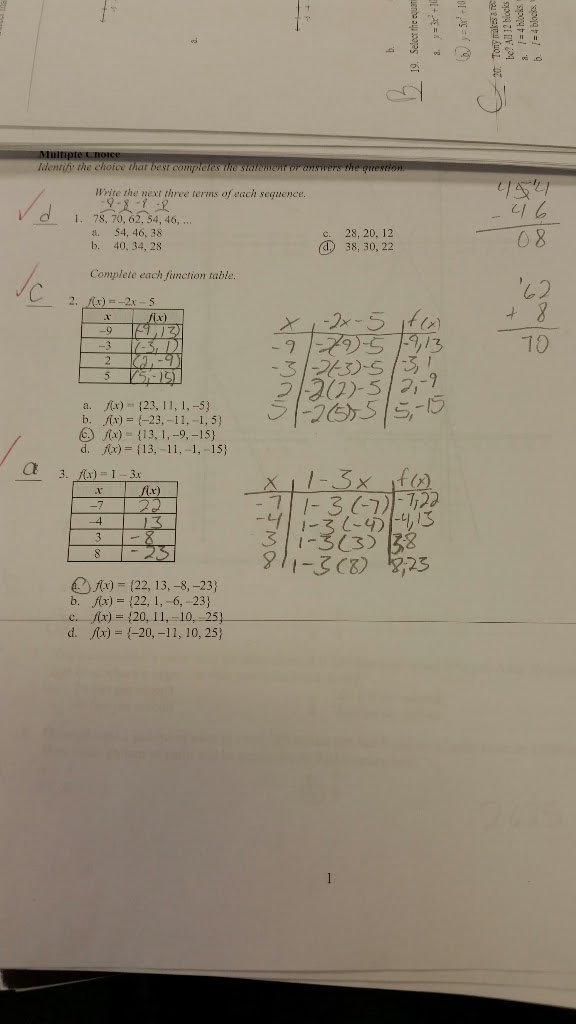 Even though I talk about these skills and emphasize them in class on a regular basis, I don't think I'm doing a good enough job of having them practice those skills.

Tomorrow, I'll be picking four or five problems from the test and having them write a sentence or two for each answer about why it's right or wrong.  I have them justify their answers in class, but not often enough on tests.  If I were to do that, perhaps they would be more likely to check their work and realize mistakes before they hand it in.


When I was college, I had a professor whose teaching I didn't understand.  The class was complicated and often confusing, but when it came time for papers, I always earned a better grade than I thought I should have.

A friend of mine clarified how this worked.  He told me that this particular professor "taught hard, graded easy."

This reminds me of a conversation that I had a few weeks ago where it was suggested that the tests should NEVER be a source of a stress.  If I'm doing my job well, when it comes time for a test, the students will not feel as though they are trying something new.

Assignments and homework are for practicing skills, testing theories, experimenting and exploring, while assessments are for demonstrated what you've learned.

I need to be doing a better job of creating directed assignments so my students know EXACTLY what to expect on the tests.
Email ThisBlogThis!Share to TwitterShare to FacebookShare to Pinterest