Posted by Justin at 4:51 PM
The plan for Math 8 was to have today be a practice day.  The students were to have completed the next page of practice problems and be ready to discuss them.

Not a single student had completed the assignment.  I find this frustrating, but wasn't surprised.

So I modified my plan.

Instead, I had the students use the class time to complete the assignment that I had wanted done last night.

I walked around, redirecting students back to task, encouraging them to read directions and restate them in their own words.

The first problem was "Which of these two functions has the greater rate of change?"

It suddenly felt to me as though I were teaching another language, that none of these topics had ever been covered and that it was completely unreasonable of me to expect them to remember anything that we had done over the past 100 days.

And how absurd of me to expect them to attempt it.

There were 4 students in the class who were putting anything more than token effort into the work.


I let my frustration get the better of me.  I took a chair into the hallway and put myself in time-out.

A few students came out to ask me questions and I very politely and patiently helped them.

In relaying this story to my coworkers, I found that almost everyone else is experiencing the same issues.  There are huge problems with retention and effort, as well as organization, all throughout the grade.  With this not just being an issue in my class, I need to find a way to address it both in my room and outside.

It is clear that a concerted community effort needs to be put forth to figure out how to combat this if we are to do the best for our students.

What happens between 7th and 8th grade that changes the dynamics so drastically?

In 8th period, I wasn't willing to sacrifice the learning of the class for the 4 students who were unable to control themselves.  I sat in the middle of the room, taped two whiteboards back to back, wrote on both sides and taught with patience and calm.

My students turned on each other.  The section of the class who has been trying to learn backed the other 4 into a corner and shouted them down every time they talked.

At one point, one of the disruptive students accused me of refusing to teach him.  He claimed that I wouldn't let him see the whiteboard where I was doing the work (even though it was directly in front of his face.)

I didn't have to say a word in my own defense.  The rest of the class screamed at him.  I hope that it will maybe translate to some introspective thought on his part.  In any event, this method of instruction was the best kind I've found with this group, so I'll do it again until it stops working...


I managed to snag the library computer lab for a period today, so I had my geometry students exploring GeoGebra.  I gave them some basic guidance but let them run wild with it.  They really seemed to enjoy it and were sad when it was over. 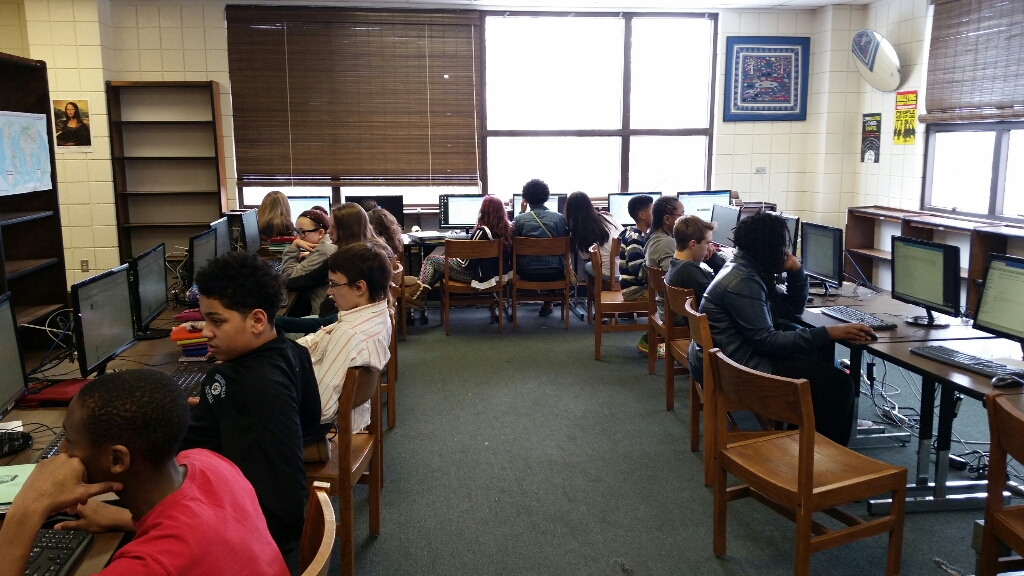 When we got back to the room, I pulled up the new shapes book from Christopher Danielson and we had an amazing discussion about properties of shapes.  A group of 4 shapes is on each page and we talked about which shape didn't belong and why.

It was VERY interesting to see which properties were noticed by which students.  Some kids looked for the number of sides, while others looked for whether they were concave or not.  Others looked for what jumped out at them with some students looking for lines of symmetry.

"The one of the bottom right doesn't belong because it's the only one that couldn't be a head."

Kids are weird, but pretty cool.
Email ThisBlogThis!Share to TwitterShare to FacebookShare to Pinterest