Posted by Justin at 4:34 PM
After the warm-up in Math 8, I announced that I would be checking their workbooks on Monday and where they should have completed up to.  I told them that I didn't feel like talking and they had their assignments.

"I will be sitting here in the middle of the room.  If you have any questions or would like clarification on anything, come on over and I'll be happy to help."

In both period 1 and period 8, I had 4 kids come and sit with me.  We went over the material in depth and had a great discussion about slope and linear equations.

The prime example of this was:

Eduardo is 6 years younger than his sister.  Write an equation to represent this situation.  What is the rate of change?  What is the initial value?

They struggled with understanding that in this case, "initial value" meant "How old was his sister when he was born"

This really underscored for me the difficulty that my students have with sense-making.  It's a skill that I think I have so it's often very difficult for me to understand why my students don't.

My major struggle as a math teacher is, and always has been, empathizing with my students' confusion over basic math concepts.  Math has always come very easily for me.  Numbers click into place and make sense.  Since it was so easy for me and since it makes perfect sense, I often have trouble wrapping my mind around the fact that it isn't the same for everyone.

Maybe the only subjects we should teach should be ones for which we don't have an affinity.  That way, we would be learning along with the students.  Our expertise would be in practice and strategy rather than content.

I think I'd make a pretty awful English teacher... 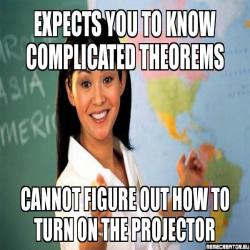 In totally unrelated and very sad news, one of the students that I taught in the alternate education program during my first year was found dead yesterday.  He was shot 6 times by another student from that program.

I remember the young man fondly and remember that he was quite bright and charming.  He was a natural leader and was always willing to listen to reason, even if he didn't always follow it.

I am not surprised by this news, but I am saddened by it.  I was going to post a picture of him, but I couldn't find one that wasn't a mug shot and I don't want to remember him that way.

We can't save everyone, but I'll be damned if I'm going to give up.
Email ThisBlogThis!Share to TwitterShare to FacebookShare to Pinterest