Posted by Justin at 3:55 PM
As I did yesterday, the Math 8 classes spent the first period discussing the problem from the previous class.  They were much more attentive today and the repetition of routine and problem type gave them a better grasp of the types of questions they should be asking and how to relate the numbers and concepts.

The class discussion was good, but once we moved to independent work, things fell apart.  I'm sure that Angela Duckworth would tell me that it's because my students lack grit, but that's a discussion for another time.  What I do know is that if I'm not standing over them, they have difficulty focusing on a task.

But the discussion was excellent.  I directed the students on what aspects might be helpful to examine in what order, but they gave all of the answers and asked all of the questions.  Students who normally tune out were engaged and interested.  I think I'll spend some time this weekend working on developing some similar problems.

I'm picturing setting up a scenario like the ones I've given them, but not asking any questions.  Each student will be given 2-3 Post-It notes to write down questions that they wonder about.  I'll have them put those questions on the wall and we will sort them into questions we can solve with current information, questions we would need more information to solve and question we can't solve.

I wish I had started this earlier in the year so they would be in the habit, but I lost my time turner at the last Quidditch match.


The geometry class was split up into individual tasks again.  I put a problem from Go Geometry on the board and told them that it was within their scope, but was challenging.  They could work on that, their guided notes, practice problems, etc.

Again, I got to it with a group of young ladies working on this problem and I had a great time!  They struggled, but didn't give up.  They complained about headaches and frustration, but didn't give up.  The key to this problem was in seeing it in a certain light and I guided them towards that image with the questions that I asked.  I was incredibly proud of them and I can sense a level of mathematical curiosity that I didn't sense before. 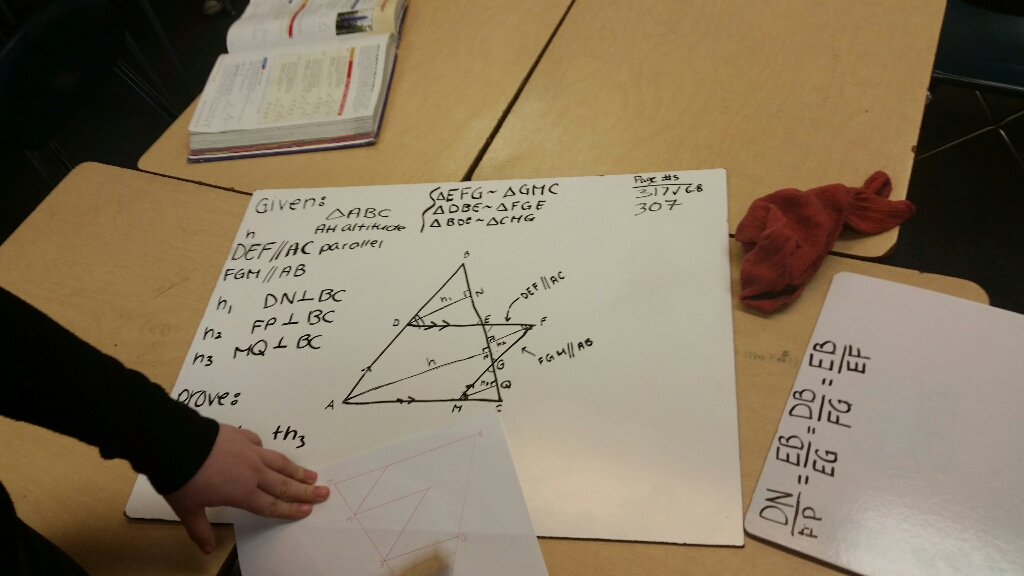