Posted by Justin at 5:59 PM
I have been attending EdCamps for 3 years.  I have attended 5 in Pittsburgh, helping to organize 4.  I have attended one in New Jersey and one in Minneapolis.  I presented at all of these.

I believe firmly in the EdCamp movement.  I believe that the best way for teachers to improve their practice is to learn from each other in a low-pressure setting where they are highly engaged.  The EdCamp movement allows this because it incorporates choice into the process: you attend the sessions that are interesting to you.


Several months ago, my district sent out a survey asking people why they teach and what insights and skills they feel they could offer to their colleagues.  Behind the scenes, some incredibly hard-working faculty compiled this list and began moving towards an EdCamp-style professional development.

Shortly after, I was invited to help with the process.  We composed and sent out a second survey to the faculty of the district explaining the basic concept of the EdCamp and asked what sessions, if any, they would be willing to present.

The response was overwhelming! Almost 50 people said that they would facilitate or present on topics ranging from classroom management to physicality in the classroom.

This past week, faculty signed up for the sessions that they wanted with a cap of 30 per session, first come, first served.  During the past 5 days, I fielded tons of questions from people who were...dubious (that seems like a polite word) about the prospect of this inservice.  It was wildly different from anything that many of them had experienced.


Here's how my day went:

I arrived at 6:00, organized some items in my class and put the finishing touches on the presentation that I was planning to give.  I went to the lobby where people would be gathering and helped to set up the welcome tables.

At 7:30, people started arriving, signing in, finding out where their sessions were taking place.  They received raffle tickets for the door prizes and a name tag that read "Ask Me About_____." Our curriculum director provided breakfast for the district and people were able to mingle . 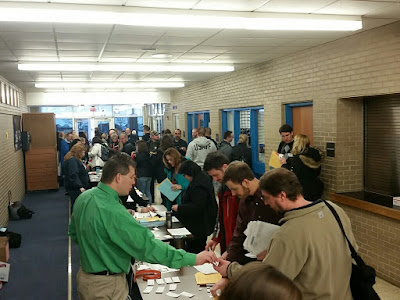 After the high-energy kick-off, we heard a lightning talk from one of our instructional coaches.  She spoke about the importance of integrating writing.  She was a very dynamic speaker and several people in the audience were in tears by the end. 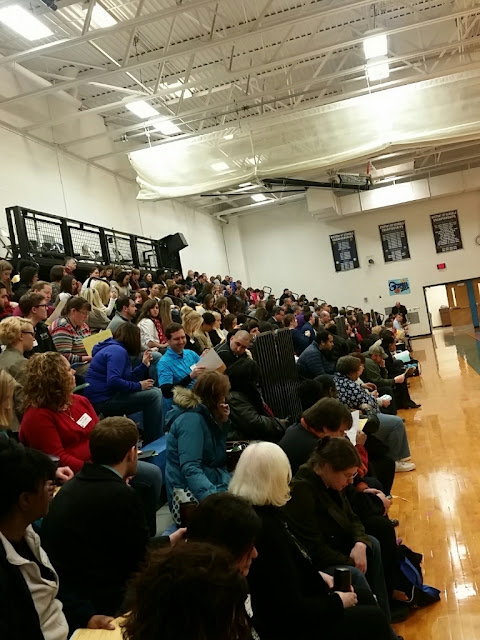 The first session I attended was on the importance of building rapport with students.  The participants discussed the various ways that they build rapport as well as challenges to doing so. 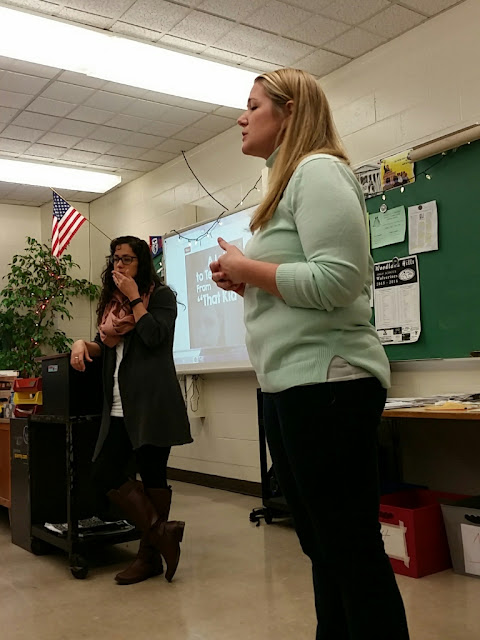 They started us off by asking us to think about the kid who makes us the most insane and try to write 3 things that we know about them.  Our task this coming week is to keep these things in mind during the coming week and try to remember that their attacks on us are not personal.

**Spoiler alert** They did totally kill it!

We discussed the various ways that we build rapport with students, like greeting them at the door, making eye contact and imposing High Five Friday upon them with a religious fervor the likes of which haven't been seen since Torquemada. (Ok, that was me.)

In between sessions, I popped into the cafeteria to drop off my raffle tickets and take a picture for the #WhyITeach photo booth.
After a quick stretch, it was on to session 2!  Katrina Bryan spoke about how she uses stations in her science class. 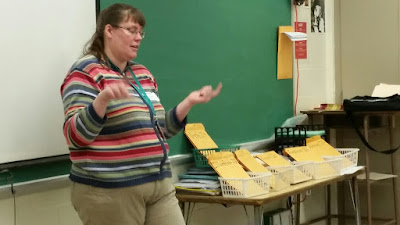 The majority of the science department was there and, while I can't speak for them, I will totally speak for them.  We were blown away!  Those folders behind her each contain a science station.  They are labeled with things like "Read It", "Illustrate It", "Assess It", etc., each with its own task for the students.  Students pick a task, complete it and pick another, working their way through the section.  This is such a simple, and yet brilliant, idea!  I should say that Ms. Bryan obtained these from another teacher and modified them for her needs.

I left that session having excited conversations with some of the other science teachers and already making plans about how we could do something similar.

The next session was one where I presented.  It was an honor to be able to talk to a group of my peers about what I've been doing in this blog and answer their questions about using blogging as reflective practice.

A large contingent of the science department attended, most with the intent to harass me.  Unfortunately for them, their plans were thwarted when I blew them away with my engaging, dynamic and interesting talk.

Seriously though, I think they were surprised.  There were several people there that I didn't know and several of them came up to me afterwards to thank me and ask some more questions.


After lunch, we gave out door prizes to some incredibly lucky faculty! 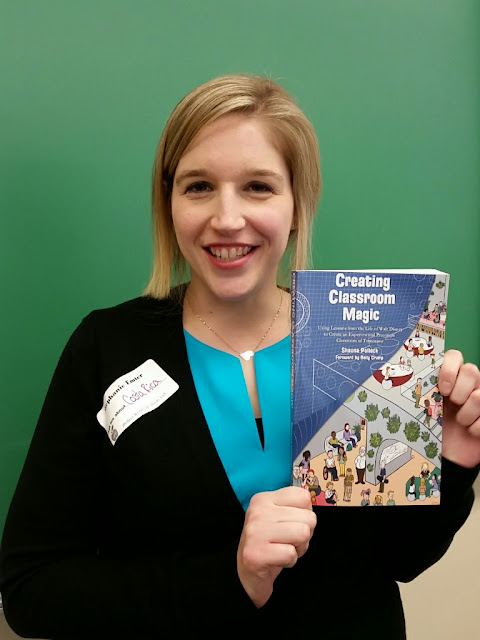 This was followed by another lightning talk from a district administrator about passion.

The 4th session I attended was from my colleague in the science department who got me started working with the Science Contracts.  He spoke at length about how he sets them up as well as why and the research behind the idea. 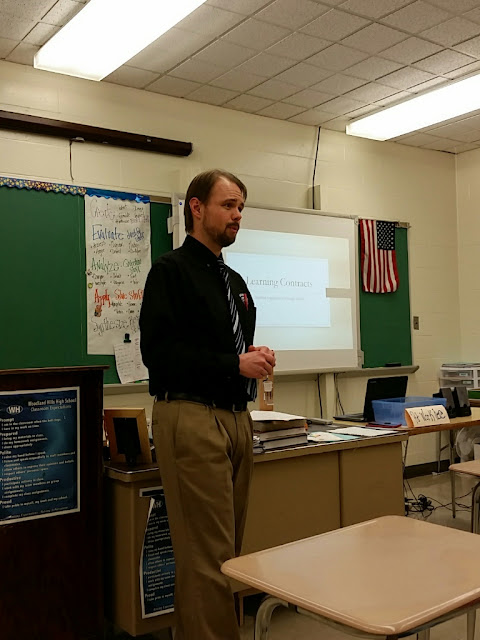 Once again, the audience, primarily primary teachers (hehe...see what I did there? I'm so clever) were fascinated and impressed.  Since I also use the contract, I was able to give a second point of view on how well they work.

At the end of the 4th session, the faculty separated into small groups, each facilitated by an administrator.  We debriefed from the day, talked about the sessions that we found interesting and useful and discussed whether we would be interested in doing another inservice in this style.

The response was overwhelming.  My favorite quote came right near the end.


"I brought magazines because I thought this would be boring. I didn't open them once! This was great!" #EdCampWHSD
— Justin (@JustinAion) February 12, 2016

This seemed to be the prevailing sentiment from what I heard and what was relayed to me.  As I said, many people started the day feeling wary and unsure about the concept.  I believe that many were converted by the end.

This fills my heart with more joy than I can express.  While it feels great to have people find joy in that which brings it to you, what I find most invigorating is that everyone seemed to benefit.  Several teachers spoke at the beginning of the day about how they didn't get into the sessions they wanted.  They were going to topics about which they had no interest, or thought didn't apply to them.

At the end of the day, however, many of these teachers expressed how they were able to get actionable information from every session they attended.

Several teachers also utilized the hashtag that we set up to broadcast the great things that were being done!

There was a sense of exhaustion as we exited the building, but it was the kind of exhaustion that comes from doing something satisfying with people you respect.


Everyone is an expert in something.  Every teacher is doing something in their class that they can share for the benefit of other teachers.  We don't need to be hiring outside consultants to tell us how to teach.

The resources that exist within our own district (or yours) are more valuable than anything else.

My deepest thanks to everyone who helped to put this day together and everyone who took a chance on something new.

While this project wasn't really my baby and I tried to stay out of the spotlight, I can't help but feel proud of the work that was done.  I have faith that it will continue in the future and our teachers will continue to rely on each other for the support and resources that we have to offer.

Thank you to everyone who helped make #EdCampWHSD such a great experience!
— John C. Danchisko (@MrDanchisko) February 12, 2016