Casey At The Bat

Posted by Justin at 3:55 PM
On June 3, 1888, the Daily Examiner in San Francisco published a poem by Ernest Thayer entitled "Casey at the Bat: A Ballad of the Republic Sung in the Year 1888."

The poem details a fateful afternoon for a small town baseball team, down by 2 runs in bottom of the 9th inning.  In the first stanza, two batters are called out at first and it's looking grim.  The team and crowd believe that if Casey can make it up to bat, he can deliver the hit that will send them to victory.

Before he can get up to the plate, however, there are two other batters, both seen as weak hitters and hope flags.  Against all odds, both men get on base and it's up to Casey to bring all three home, winning the game.

Casey approaches the plate with the entire crowd cheering.  Confident in his abilities, he literally watches the first pitch go sailing past, claiming "that's not my style."

When the strike is called, the crowd screams death threats at the umpire.  A riot is only prevented when Casey, so graciously, raises a hand to silence the stands.

A second strike is called when Casey ignores the next pitch as well.  This time, he sneers at the fans who are jeering the umpire and they quickly fall into an awed silence.

Casey lines himself up for the third pitch and, well...


The sneer is gone from Casey's lip, his teeth are clenched in hate;
he pounds with cruel violence his bat upon the plate.
And now the pitcher holds the ball, and now he lets it go,
and now the air is shattered by the force of Casey's blow.
Oh, somewhere in this favored land the sun is shining bright;
the band is playing somewhere, and somewhere hearts are light,
and somewhere men are laughing, and somewhere children shout;
but there is no joy in Mudville — mighty Casey has struck out.


This poem has been re-written and adapted countless times in the past 128 years.  My first memory of it was a Disney version from 1946.  I have no clue how or where I happened to see it, but it's firmly planted in my mind.


I also saw a version on Tiny Toon Adventures, where the role of Casey was played by Buster Bunny.  In this version, however, along with many other adaptations, Buster actually hits the ball and scores the winning runs.  A similar one was featured on Animaniacs. 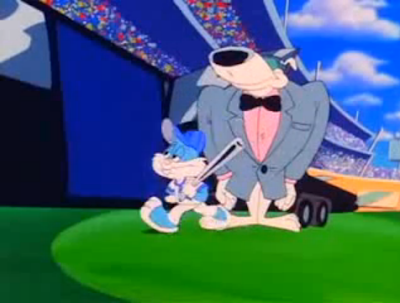 While fun and entertaining, these parodies and remakes miss, what I feel, is the most important aspect of this poem.

Aristotle claimed that stories could be broken in comedies and tragedies.  This wasn't a function of whether they were funny or sad, but rather of how the conflict arose.  Stories where conflict happens as a result of circumstance or timing (earthquake, cancer, friends missing each other on separate trains, etc.) were comedies where those where conflict arose due to the actions of the main characters (lust, hate, love, ambition, etc.) were classified as tragedies.

Casey has a tragic flaw.  His arrogance at the plate leads him to a place where his missing a single swing ended in his own ruin and the downfall of the team.

There is no epilogue to talk about the reaction of the crowd to the collapse of the titan.  The only reactions that we see are fury at the umpire for completing the task assigned to him.

This fallen hero leaves the entire town of Mudville under a cloud of depression and sadness.


It wasn't until much later in my life that I realized the other piece that had been left out.

Mudville had an opponent.

As vocal as the crowd was in favor of Casey and against the tyranny of the umpire, there was an entirely different group who were rooting for Casey to fail.  They may have been singing ballads of the pitcher who struck out the last batter in that crucial game.

More than ever before, this poem speaks to me. I feel for the crowd, who placed all of their hopes in a single person.  How many of those people went home, cursing the umpire for doing his job, cursing the pitcher for playing as best as he could, or cursing the name of mighty Casey himself.

I don't see Casey as the villain.  I see him as a product of the environment.  Without a crowd to place him on a pedestal, would his arrogance have reached the level of allowing the pitches to fly by? Probably not.  No one develops hubris in a vacuum.

That crowd went home, angry and disappointed, with no notion of their own culpability in their emotions.  When your team loses, you blame the team, the umpire, the coaches, the managers, the weather, etc..

Only this isn't a game.  Instead of disappointment and sadness, the emotions that run through many of my students, both present and former, are more akin to terror.


We are Casey and we are the crowd.  Our arrogance allowed this to happen.  Just hours after the election, the Klan was marching in celebration.

Several of my students came to me to express their hatred of Mr. Trump and I told them that while I sympathized, he wasn't the problem, merely a symptom of a much greater disease.

He is the spot on the otherwise pristine apple that belies that rot beneath. 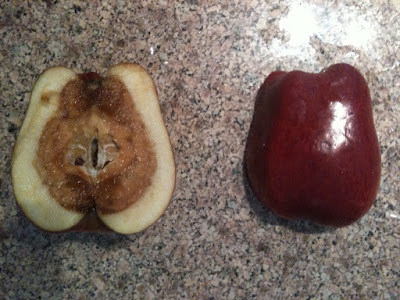 My deep and fervent hope is that with this rotten center laid bare, with the attitudes of hatred, racism, misogyny and bigotry, now clearly in the open again, we can find a way back to where we need to be.

As a white man, I am deeply fortunate.  I am, however, deeply afraid of what we have become.  I fear for the message that we have just sent to our citizens as well as the rest of the world.

We do what we can to spread love and tolerance.  We make it clear that we will not accept hate and fear as the norm.  We make ourselves available for those who need us.  We use our voices to shout when we see injustice.  We use our hands to raise up those in need.  We speak for those with no voice and carry those who can't walk.

We stand with our brothers and sisters, regardless of creed, color, religious affiliation, gender, sexual identity or political leanings.

When they offer hate, we offer love.  Where they build walls, we build bridges.

When they go low, we go high.


But we never, ever stop fighting for what is right.

And we never let our arrogance allow us to watch the pitch go by.
Email ThisBlogThis!Share to TwitterShare to FacebookShare to Pinterest