Posted by Justin at 4:01 PM
Today was designed to be a practice day for the Math 7 kids.  We've been working on fraction division, which is admittedly, a difficult topic.

In the first class, I had a worksheet of practice problems.

They were a bit beyond reach.  They would have been fine had we been doing "keep-change-flip" or the butterfly method or any of that nonsense, but since we've been using physical counters or pictures, they were a bit ugly.  The kids got bogged down with the numbers themselves instead of the operations.

So I revised it.  For the second class, I focused on word problems.

"Peter wants to make cupcakes.  They take 1/3 cup of flour per batch and he has 7 cups of flour.  How many batches can he make?"

We talked about the problem for a little bit before even bringing up the idea of division.  We talked about it as a practical measure.  If you want to make a bunch of batches of cookies or cupcakes, you need to make sure you have enough ingredients.

They got the solution to the problem without using fraction division and we talked about how that was fine.

The math should fit the problems.  Problems shouldn't be invented to fit the math. 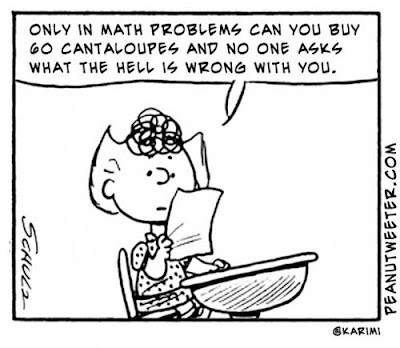 "You got the right answer and all of your work is valid, but I wanted you to use a different method, so you get an F" is one of the MANY reasons why so many kids hate math.

The sheet that I gave them had 10 word problems.  I told them to read all 10 before deciding where to start.  I told them that the problems lent themselves to fraction division, but however they solved them was fine with me.  I told them they needed to show their work.

Then the period ended.
Email ThisBlogThis!Share to TwitterShare to FacebookShare to Pinterest