Posted by Justin at 3:54 PM
I am constantly amazed at how different groups of students react differently to the same lesson.

Today's Astronomy lesson was based around going through some of the major constellations and discussing the mythology behind each.  We started by talking about mythology from various cultures and how they are pervasive in our current society.  I asked them to tell me what myths they knew and filled in the gaps with names they didn't.

They were quite surprised to discover how much mythology they knew without actually realizing it.
The narcissus was named for a Greek myth about a young man who starved to death while staring at the beauty of his own reflection.

Zeus was famous for his philandering and often visited the beautiful nymphs on Earth.  In another myth, his wife, Hera, came looking for him.  One of the nymphs stalled Hera by being very long-winded and allowed Zeus to escape.  When Hera discovered what had happened, she cursed the young nymph so that she was only able to repeat the last few words that had been spoken to her.

The nymph's name was Echo.

The phrase "he flew too close to the sun" to describe someone who overextends themselves to their own downfall comes from the tale of Icarus and Daedalus, who made wings of wax to escape prison.  Icarus was warned not to fly too close to the sun lest his wings melt, but he neglected the advice and fell to his death. 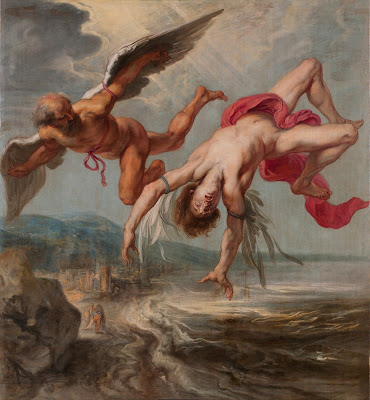 Even the word "cereal" has mythological origins, being named after Ceres, which was the Roman name for Demeter, the goddess of agriculture and grain.

In  two of my five Astronomy classes, the kids were HIGHLY engaged.  The discussion moved forward quickly with them joining in with the various myths that they knew.  One class went particularly well through no doing of mine.  In that group, there was a student who normally is checked out, but was on the ball today because, as he said, "mythology is ballin'."

In the third class, the students seemed close to indifferent, while in the remaining two classes, they were actively disinterested.

Their disinterest triggered a vicious cycle of my unwillingness to be excited myself.  Or perhaps it was the other way around.  It's certainly possible that my telling the same story for the 3rd time, with the prospect for doing it twice more, sapped my enthusiasm which, in turn, triggered disinterest in them.

The chicken or the egg...

In theory, I should be the one to break this cycle.  I'm the teacher, I'm the adult, I'm the one with the maturity to take responsibility for the situation. (Shut up! I'm TOTES mature! You're just a doodoo head!)


I know this is how the cycle has to end.  Many days I can do it.  But today, it was a challenge.  It's exhausting to be spoken over all the time and it's hard to gather up the enthusiasm when you're exhausted.