Posted by Justin at 3:09 PM
One of the running stereotypes of society is that Kenyans are great runners.  In truth, this isn't far off.  For the 2014 New York City Marathon, three  Kenyans finished in the top 10, including the first place winner.  In 2013, it was 5 out the top 10 finishers, including first place. 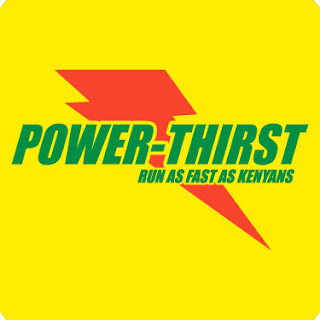 Many different theories have been put forth about why this happens to be, including altitude, different genetic make-up, methods of training and diet.  In 2013, NPR did a story on this exact question.  Researchers began examining distance runners and saw the not only was there a disproportionate number of Kenyans listed as top-tier runners, but that the majority of those Kenyans came from a specific tribe.

People who run will often tell you that distance running isn't about strength or speed, but rather about pain management.  Running hurts.  It hurts a bunch.  It hurts in your feet, your legs, your lungs, your head, your soul.

What the researchers found was that there wasn't much special about this specific Kenyan tribe in terms of diet, physical make-up or training.  Instead, they discovered that this tribe, through hundreds of generations of coming-of-age rituals, had managed to weed out the members with low pain-management skills.

For the males, the ceremony involved driving a spike through the head of their penis.  If they bore the pain "like men should" then (once healed, presumably) they were allowed to marry and propagate the tribe.  Those who cried out or refused the ritual were not able to pass on their genetic material.

The results of this was that this particular tribe happens to be better at managing pain than almost everyone.  This leads to the ability to push through the relatively minor pain of long-distance running and win a disproportionate number of races.


I was thinking about this because the last few weeks have not been great.  I have been annoyed, frustrated, tired, ill-tempered and poorly behaved.  I can't say if this is as a result of my students poor behavior recently, or if their behavior was a reaction to my mood.

Or, most likely, those were independent events which happened to feed off of each other.  People are amazingly complicated and when you bring multiple people together, those complications grow exponentially.  It's not inconceivable that a student stubbed their toe on Tuesday and a cascade of events caused them to be in a fight on Friday. 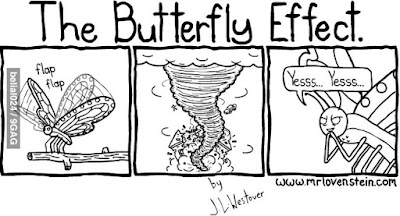 The factors that work into group dynamics are almost too complicated to measure, especially when I regularly come into contact with upwards of 200 students per day.

But today, the butterfly flapped her wings and I had a nice cool breeze.

We completed the notes on the history of astronomy and discussed half a dozen pivotal astronomers and astronomical model throughout history.

The kids took notes.  The tangents that we took were productive and interesting.

There were no conflicts.

I was singing and joking around with the students. 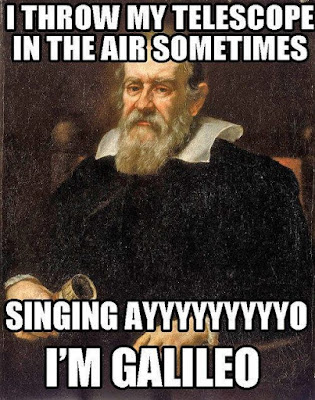 It happened in all 5 sections, with different questions leading to different, yet equally deep and valuable discussions.

I'm not sure what changed from earlier in the week, but I'm not going to question it.  I'm going to use this momentum to push as far as I can.
Email ThisBlogThis!Share to TwitterShare to FacebookShare to Pinterest